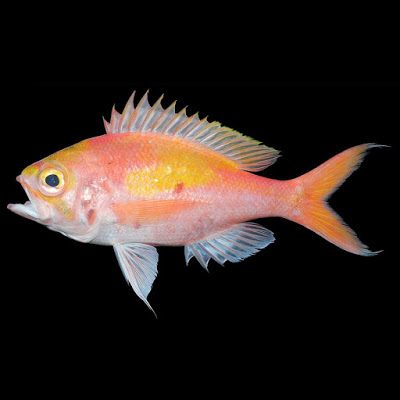 A new genus and species of the percoid family Symphysanodontidae, Cymatognathus aureolateralis are described based on three specimens collected from North Sulawesi, Indonesia. The new species shares characteristics with the confamilial genus Sym-physanodon and the fish has been given the common name, Wavy Jaw Slopefish for its wavy lower jaw and well-developed outer tooth patches.  The three fish were caught on hook and line and there not much information about how deep these fish were collected but a photograph of this fish was taken at a depth of about 654 feet (200 meters).

The new species is distinguishable from members of Symphysanodon by the following diagnostic characters: posterior tip of coronoid process of dentary abruptly depressed, so that teeth on anterior portion appear as an elevated patch, anterior tip of upper jaw not notched, and posterior nostril horizontally slit-like. MORE