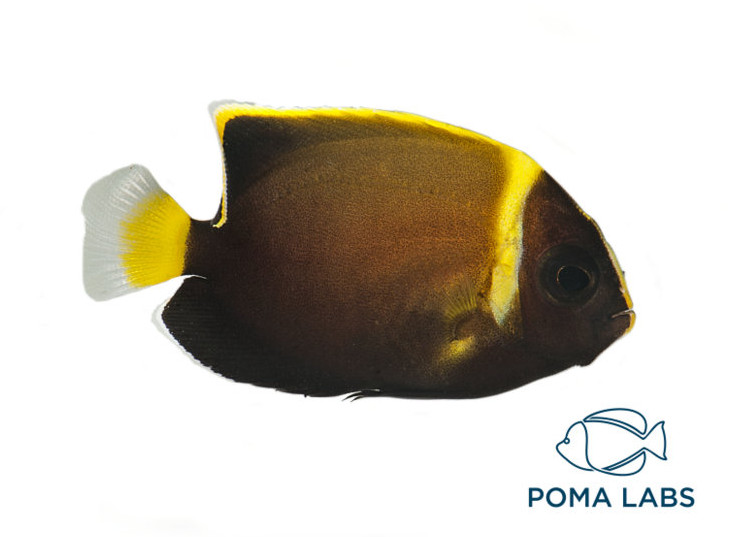 Poma Labs made a splash at MACNA 2017 with the release of several new captively bred angelfishes. Their star-studded line-up included perennial favorites like the Blueline Angelfish (C. septentrionalis), lesser-known gems like the Bluespotted Angelfish (C. caeruleopunctatus), and the inimitable Conspicuous Angelfish (C. conspicillatus). But for the true pomacanthophile, the most exciting news might have been the (unintentional) production of a couple interesting hybrids which the aquarium world has never before seen.

So what do you get when you take one of the rarest aquarium fishes (the Conspic) and cross it with one of the most elegant pomacanthids (the Blueline)… the creature seen here, apparently. This idiosyncratic little fishy was found swimming amongst a brood of baby Conspics that had been produced alongside C. septentrionalis, and a quick glance shows it to have an unusual mix of traits from these parent species. In general, it could be said to more closely resemble a juvenile Blueline, though thus far it lacks the eponymous blue lines. Most apparent are the yellow opercular bar, the yellow caudal fin, and the yellow edge to the dorsal. Meanwhile, we see from its C. conspicillatus heritage a cream-colored edge to the dorsal and anal fins, and Dr. Matt Wittenrich also informs me of a dark spot in the posterior of the dorsal fin which this specimen shares with juvenile Conspics (though not terribly visible in photographs), as well as some possible similarities in the jaw morphology (e.g. jaw angle and maxillary/dentary shape).

This remarkable individual illustrates the most exciting potential of captive breeding—the creation of interspecies crosses which could otherwise never occur in nature. In this instance, the Conspicuous Angelfish comes to us from the subtropical waters of the Coral Sea (with aquarium specimens sourced exclusively from New Caledonia), while the Blueline is a resident far to the north along the coastline of Southeast Asia and Japan (Taiwan being the origin of the broodstock used here). So here we have two angelfishes that were previously separated by some 4,400 miles (7,100 km) and which were flown halfway across the world to Florida to make their beautiful babies. Amazing! Think of all the other exciting pomacanthid crosses that could be attempted… Polynesian Peppermints X the Japanese Venusta… Hawaiian Personatus X Aussie Semicinctus… a Malagasy Kingi X a Kiritimati Griffisi. The possibilities are endless…

Fortunately, this unique hybrid specimen wound up in the hands of aquarist Ted Krupman—a man with a particular knack for acquiring one-of-a-kind fishes—so we’ll likely be treated to more images as it matures. Inquiring minds want to know, will it eventually develop blue lines or the namesake spectacles of the Conspic? I’ve included a highly accurate artist’s rendition of what this might look like. Of course, there’s always the possibility that this particular cross might result in a hideous creature possessing the featureless brown canvas of the Conspic without any of that species’ desirable facial markings. 🙂 And we don’t yet know which parent was which here; perhaps the sex of the parent species influences the phenotypic outcome? 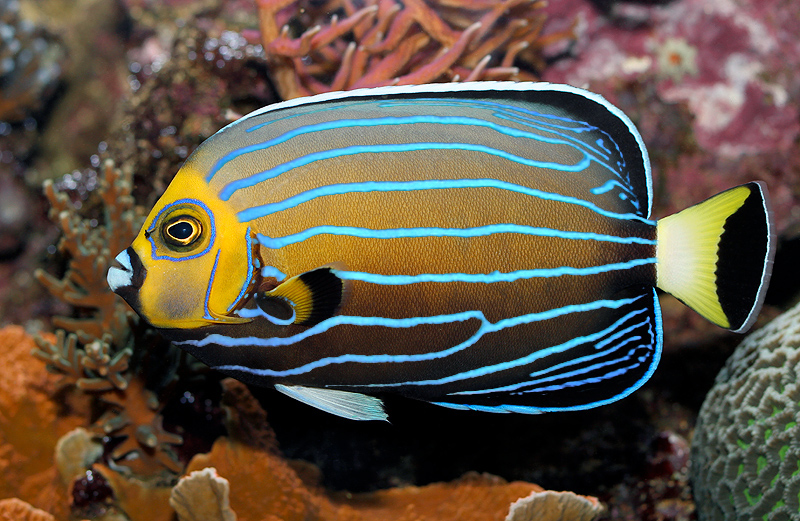 Obviously, this is what a Bluespicuous Angelfish will look like…

Elsewhere on the hybrid front, Poma Labs will soon be offering up for sale a cross of the Black Velvet Angelfish (C. melanosoma) and the Bluespotted Angelfish (C. caeruleopunctatus). I’ve written extensively on this latter species and its seemingly unorthodox speciation in the Coral Triangle. Put simply, C. caeruleopunctatus, with its pretty sapphire speckles and blue-lined finnage, appears noticeably distinct in comparison to its nearest neighbors in the Coral Triangle. Compare C. dimidiatus of Eastern Indonesia and the populations of C. melanosoma from the Northern Philippines and Indonesia and you’ll see what I mean; these are starkly homogenous fishes which show only a vague semblance towards their blue-spotted cousin.

To the best of my knowledge, nobody has ever documented a hybrid of the Bluespotted Angelfish before, though mixed-species pairs (nay, orgies) have been seen in the wild. The reproductive and geographic boundaries which serve to separate these taxa are clearly quite weak and easily overcome, which makes it all the more surprising that they even exist as separate entities to begin with. While there was likely a time when portions of the Philippines were considerably more isolated than today due to the drastically lowered sea levels of the Pleistocene, how do we explain the continuing separation of these two fishes when their ranges now overlap and they are so clearly capable of interbreeding. 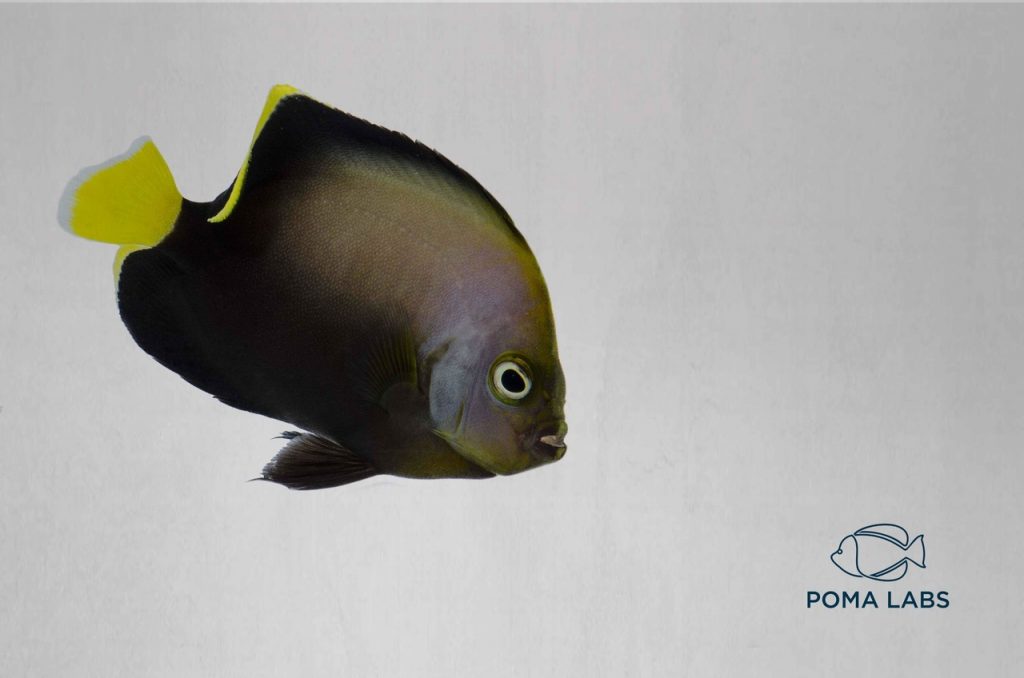 It’s possible that the hybrid offspring of these two Filipino fishes are somehow less fit for survival or perhaps even incapable of breeding back with their parent species, which would create a very clear impediment for gene flow between them. This is certainly something which the aquaculturists at Poma Labs could find out through backcrossing of the hybrids, but it’s hard to imagine this is actually the case, especially given the reproductive vigor of another closely related hybrid in this group, the Maze Angelfish (C. cf melanosoma X C. septentrionalis). Assortative mating (i.e. when a given species preferentially mates with itself rather than with other seemingly compatible species) is another possibility, but, again, given the well-documented tendency for this genus to hybridize, there seems to be little reason to presume this as a valid explanation. These are frisky little fishes which clearly like to sleep around.

So how is it that C. melanosoma and C. caeruleopunctatus continue to remain discrete species when their ranges widely overlap (presumably over much of the Central Philippines) while simultaneously being so capable of interbreeding? Are the differences between these two fishes simply a vestige of a time when they were more clearly separated geographically… are they on a slow trajectory towards recombining back into a single species, one which may or may not resemble this hybrid. Or, against all odds, is their maybe some sort of innate quality which now renders them incompatible, forever marching to the beat of their own evolutionary drummers. Though the Conspic might be the more coveted of the Chaetodontoplus, I can think of few fishes with so much mystery as the Bluespotted Angelfish, and it will be truly fascinating and informative to observe how this particular hybrid matures.