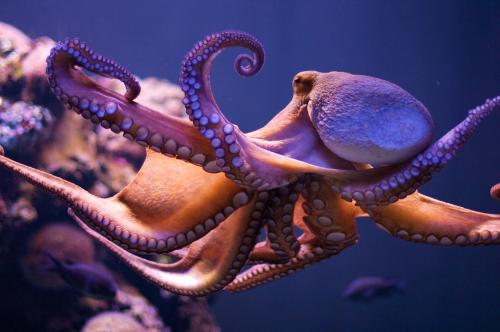 So how do you know how old an octopus is? Well, chop off one of its arms and count the rings! I kid, that’s no way to age a live cephalopod – though it’s actually not too far off from ageing Giant Squid, “Evidence from statoliths (a small mineralized mass that helps squid balance), which accumulate “growth rings” and can be used to measure age, suggests that giant squid live no more than five years”. But how does that help us when it comes to live Octopus?

Well, a small cross-section can still be removed from the stylet and placed under a microscope to count these rings, not unlike those of a tree. This is called “Stylet Increment Analysis” (SIA). “Each ring represents a day in the life of the octopus, and by counting all the lines you get an idea of how old the octopus was.”, explains Stephen C Leporati, formerly of the Department of Fisheries. While effective, this method is costly and time consuming. So let’s move on to a more efficient, relatively new method of determining just how old these brilliant creatures get. Scientists are actually utilizing a fairly simple scale – weight.

For years, population studies have been hindered due to a decent lack of measurement of the cephalopod’s age. And so, a new study began. In SIA studies, using calcine injections to visibly mark the stylets, scientists determined they grow in daily increments. Using 251 wild caught Octopus tetricus, they weighed the stylets and found a strong correlation between the number of stylet increments and the actual stylet weight. “This trend enabled us to weigh the stylets as a means of ageing the octopus, vastly expanding the prospective sample size and opening up the possibility of ageing octopus populations more accurately and comprehensively than was previously possible,” says Mr Leporati.

Estimating the age of 3,280 octopi, going only by the weight of their stylets, the team found the age to be proportionate for males and females, the maximum age being 677 days for males and 542 for females. This study was actually part of a larger project conducted by the Fisheries Research and Development Corporation (FRDC) investigating the spike in octopus catch rates in hopes of determining the sustainability of harvest. “The aging study was an integral component of this, so we could understand the influence different rates of fishing pressure may have on the population”. Over the span of two years, scientists have been able to age thousands of octopi, enabling them to asses the WA octopus population. The overall conclusion? The population is in very good health, and the fishing pressure is not having any major impact. That’s wonderful news for our eight-armed subject of adoration!