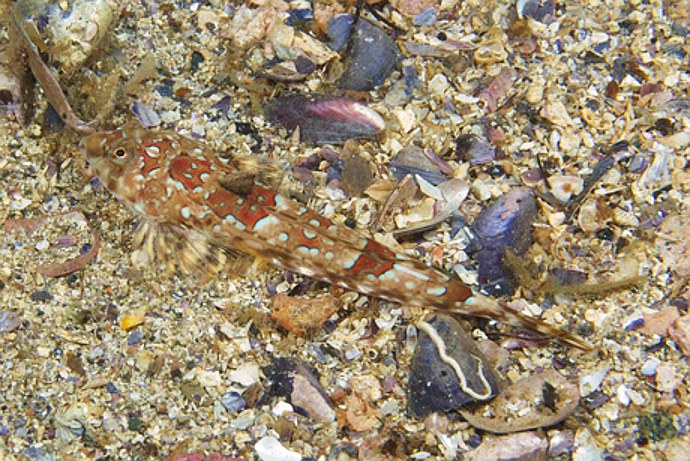 A reticulated dragonet, a new species in Sweden, well camouflaged against the seabed in the Väderöarna. – Photo: Lars-Ove Loo.


Lars-Ove Loo is the underwater photographer who has captured the fish on film. He saw it while making an inventory ahead of the creation of a new nature reserve in the islands. This was in August 2010, 19 meters below the surface of the sea south of Lyngö in the southern Väderöarna (58° 32.554’ N, 11° 05.373’ E).

Reticulated dragonet (Callionymus reticulatus) is similar to its more common Swedish relatives the common dragonet and spotted dragonet. The male reticulated dragonet is just 11 cm long and the female 6.5 cm long. It has three spines on its gill cover, whereas the other two species have four. Its snout – the distance from mouth to eye – is somewhat longer than its eye is wide.

Reticulated dragonet is found from the Weather Islands in the north down the coasts of the southern North Sea, in the Irish Sea, from southwestern Ireland down to Portugal, and in the western Mediterranean. It has been found both in shallow waters and at depths of up to 110 metres.

It is unusual for a new species of fish to be discovered in Sweden. There are now an estimated 265 species of fish in the country, of which just over 200 dwell in the sea.