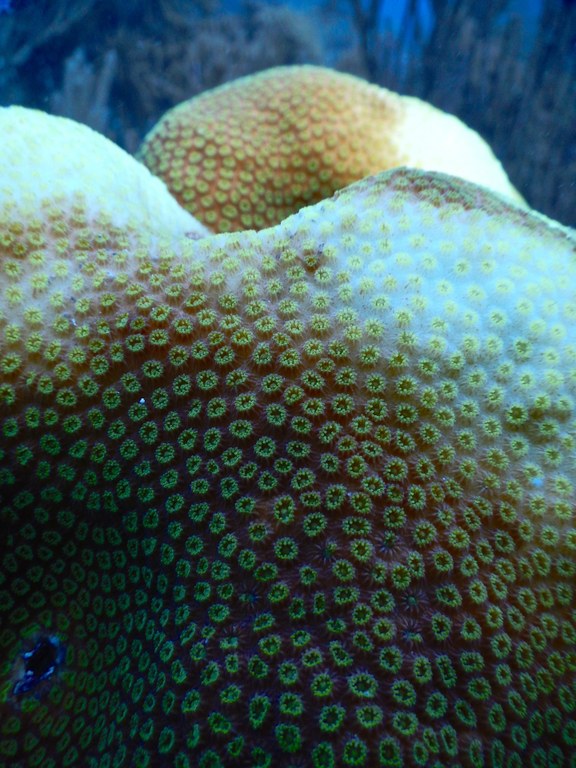 
From The University of Miami (UM) Rosenstiel School of Marine and Atmospheric Science:

The University of Miami (UM) Rosenstiel School of Marine and Atmospheric Science research team placed colonies of Caribbean star coral (Orbicella faveolata) in a heated tank for one to two weeks to replicate ocean conditions that would lead to both mild and severe coral “bleaching” – when corals turn white as a result of the loss of symbiotic algae living in their tissues. The corals, collected from waters off Miami, were then allowed to recover at two different water temperatures, below and above the local average, to see if they recovered with the same or different algal partners.

“Since ‘symbiont shuffling’ occurs in only some cases, we wanted to understand what drives this process and whether it could help corals adjust to climate change,” said Ross Cunning, a UM Rosenstiel School alumnus and lead author of the study. “We discovered that partner switching in Caribbean star corals is dependent upon the severity of the bleaching event and the temperature during recovery.”

Corals depend on symbiotic algae to survive and build coral reefs. Increased ocean temperatures due to climate change can cause these symbiotic algae to be expelled from the coral, an event known as bleaching, which often leads to death. Climate change is one of the main threats to the Caribbean star coral (O. faveolata), which was were recently listed as a ‘threatened’ species under the U.S. Endangered Species Act.

“These findings help resolve a long-standing debate over why some corals switch partners after bleaching, while others do not,” said Andrew Baker, UM Rosenstiel School associate professor of marine biology and ecology and a Pew fellow in marine conservation. “They show that, as the oceans continue to warm and bleaching events become more severe, we might expect heat-tolerant symbionts to become a common feature of recovering reefs. Corals that can ‘buddy up’ with different algae might be more resistant to bleaching in the future.”

Two more recent studies, also conducted in Baker’s Coral Reef Futures lab at UM, showed how corals modify their symbionts in response to environmental changes. The first, published earlier this year in the journal Global Change Biology, showed how changes in symbiont partners following bleaching directly increased corals’ thermal tolerance. The second, published in the May issue of the journal Ecology, showed that, in addition to changing the types of algae they partner with, corals also fine-tune the number of algae they contain to deal with an ever-changing environment.

“Together, these studies suggest that that the rate of warming, timing between bleaching events, and severity of each bleaching event, will play an important role in determining coral survivorship,” said Baker. “We need to better understand these changes in order to accurately predict coral reef futures.”