Aquarists have long recognized the regional color differences inherent in the Regal Angelfish Pygoplites diacanthus. Those from the Indian Ocean have always been held in higher esteem, as their breast coloration is a vibrant yellow in comparison to the drab grey of the Pacific population. But, despite these readily apparent phenotypic characteristics, the scientific community has largely ignored the issue. But now, with the recent publication of an in-depth molecular study from across the species’ range, we finally are beginning to unravel the mystery of this Yellow Regal’s origins, and it’s turning out to be a bit more complex than we would have suspected.

The concept of geminate species pairs should be familiar to aquarists. As it relates to Indo-Pacific marine fishes, it most often refers to two species which find themselves restricted to either the Indian or Pacific Ocean, implying that a single, formerly homogenous population was split into two distinct species by the formation of a land bridge across Indonesia during past periods of lowered sea level. Unfortunately, taxonomists have been highly inconsistent in how they treat populations which exhibit this phenomenon. Some recently described species (Nemateleotris decora/exquisita, Pseudojuloides cerasinus/kaleidos) have been split, while others (Pomacanthus imperator or Arothron hispidus) show just as much variation but, due to a lack of study, remain lumped as a single taxon. 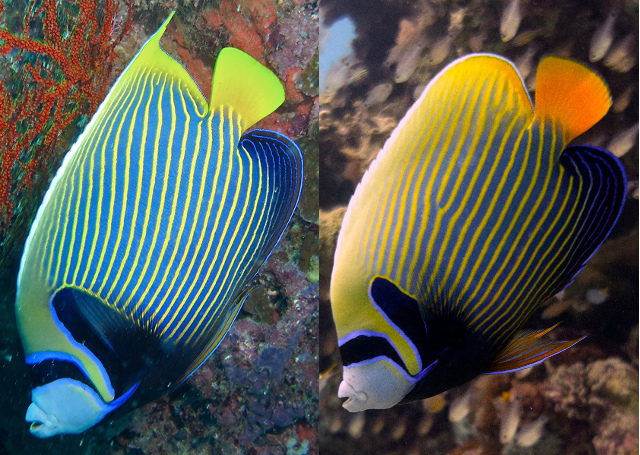 In the case of Pygoplites, a thorough examination of specimens from across much of its biogeographic range indicates what has long been suspected, those from the Indian Ocean show a genetic distinction with respect to the Pacific population. However, some of the finer details revealed by Coleman et al 2016 points to a curious evolutionary history for these fishes. The respective oceanic populations were found to differ by 1.2% – 1.5% in the genes analyzed for this study, which is a bit lower than the usual 2% cutoff used to recognize distinct “species”, but it should be noted that many recently described taxa (Pseudojuloides edwardi, Cirrhilabrus marinda, Paracheilinus alfiani) have been recognized despite sharing nearly identical genetic sequences with their respective sister species. 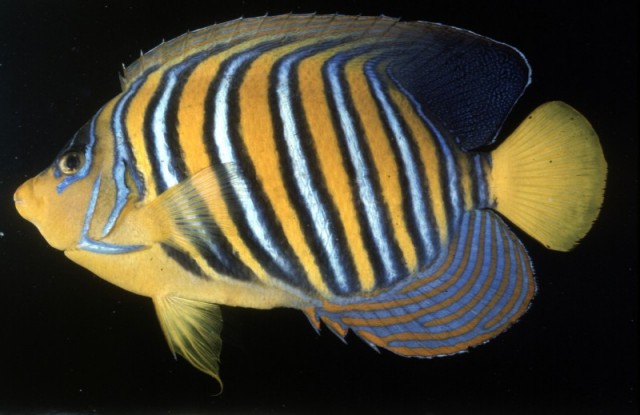 Things get more complicated when we focus in on the Indian Ocean population of Pygoplites. Specimens studied in the Maldives and Chagos Islands, both in the center of the Indian Ocean, were found to exhibit two distinctive genetic haplotypes, which implies that this region was potentially colonized on two separate occasions. The most likely source would have been the nearby Red Sea, whose population (dated at roughly 1.4 million years in age) predates these two (dated to 0.6 MYA and 1.0 MYA). The authors correlate this to periods of glaciation during the Pleistocene that could have conceivably eliminated the presence of Regal Angelfishes in the Indian Ocean, which, when conditions eventually improved, were then recolonized. While the data could be interpreted as pointing to this scenario, it is a bit hard to formulate a plausible explanation for why this would be so, as it seems unlikely that suitable habitat would have been so lacking as to entirely extirpate them from this vast expanse of ocean.

The answer might instead come from the one region of the Indo-Pacific these authors did not examine specimens from: the African coastline and Mascarene Islands. This area often forms a highly distinct ecoregion with respect to the rest of the Indo-Pacific—consider the differences seen in Cirrhilabrus rubriventralis and Paracheilinus mccoskeri here, or the endemic radiation of clownfishes found only here (allardi, latifasciatus, etc.). Might the distinct genetic populations of the Central Indian Ocean relate to independent colonizations from both the Red Sea and African coastline? For now, we can only speculate as to how these African Pygoplites might fit into this confusion. 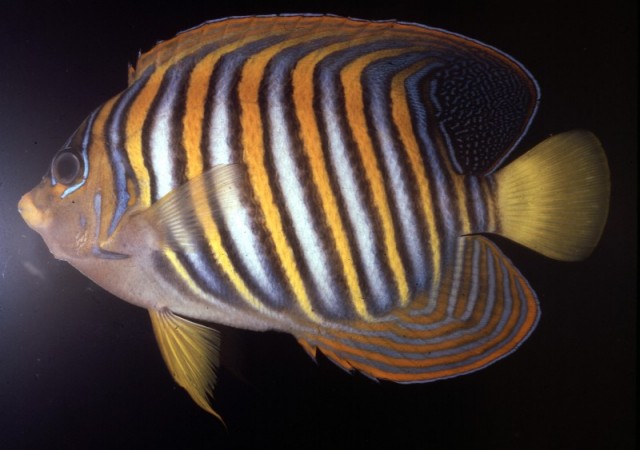 What all this leads us to is one of the most difficult questions in all of biology—what does it mean for a population to be a species? Are these Regal Angelfishes two “species”, what with their identifiable color differences and genetic separation? For now, the answer seems to be yes and no. The authors of this study have chosen to recognize the Indian Ocean population as a subspecies, P. diacanthus flavescens (derived from the Latin for “yellow”), while the Pacific population is now referred to as P. diacanthus diacanthus. If you’re thinking to yourself that this distinction seems like nothing more than semantics—one man’s species is another’s subspecies—you would be correct. But, taxonomic nitpicking aside, this is exciting research that helps to paint a fuller picture on the evolutionary history of this popular aquarium fish.

[By the way, for those keeping track at home, if (when?) the Indian Ocean population of Pomacanthus imperator is finally recognized as distinct, the likely name for it would be P. nicobariensis or, if you’re so inclined, P. imperator nicobariensis.]

[Also, there is an older name in the literature attached to the Indian Ocean Regal Angelfish: Chaetodon dux Gmelin 1789 reported from India. A bit more taxonomic sleuthing might be required on this matter, but, given the importance of priority in these sorts of nomenclatural decisions, it may eventually be determined that Pygoplites diacanthus dux is the correct terminology.]