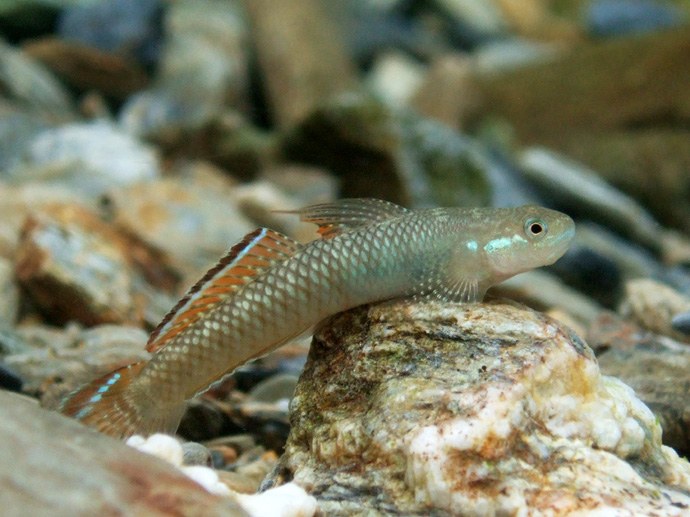 From the Okinawa Institute of Science and Technology:

In 2013, a new species of goby was discovered in a stream on the main island of Okinawa. The species was named Stiphodon niraikanaiensis, which comes from a traditional word on Okinawa and Amami areas, “Nirai Kanai.” Nirai Kanai is a mythical paradise beyond the sea of Okinawa where gods, who create life and bring about fertility, live. Ken Maeda, a researcher in OIST’s Marine Genomics Unit discovered the species and gave it the grand and romantic name. An article about the fish was published online in the journal Ichthyological Research on December 20, 2013.

“It is not unusual to discover a new species of goby,” Dr. Maeda said. He said that there are over 2,000 named species of gobies and many of them have not even been named. In order to classify small gobies, identify new species and give them names, detailed microscopic study is needed on the shapes of fins, bone structures, teeth and scales as well as on the locations of sensory organs. Dr. Maeda did exactly that, and he introduced Stiphodon niraikanaiensis as a new species which had not been found anywhere else in the world. Although the new species has only been found on the main island of Okinawa so far, the population is too small for them to have been self-sustaining the population in Okinawa. Therefore, Dr. Maeda believes that, it is likely that the fish were transported by ocean currents all the way to Okinawa from their main habitats on islands to the south, rather than them only breeding in Okinawa. What does that mean exactly?

Stiphodon species spawn in freshwater streams and the larvae drift to the sea soon after being hatched. The larvae grow in the sea by feeding on plankton before they return to the freshwater habitat. While they are living in the sea, they can be transported by ocean currents to remote areas. How long they stay in the sea depends on the species of goby, and Stiphodon species are known to stay in the sea for a relatively long period of time. In addition, the young larvae of Stiphodon species are smaller and undeveloped than the larvae of other goby species and this makes them more likely to be carried by ocean currents. This is why it is believed that Stiphodon species are prone to be transported across the sea to remote islands, although they breed in fresh waters. Dr. Maeda thinks that the Stiphodon niraikanaiensis found in Okinawa were originally carried from tropical areas by the Kuroshio Current which flows to the north along the Ryukyu Archipelago. Dr. Maeda explained the origin of the species’ name, “We think that this species of fish came from somewhere beyond the sea, but we have no idea which part of the ocean they came from. This is why I named it after Nirai Kanai, because nobody knows exactly where the paradise is.”

Since the ecology of Stiphodon species larvae in the sea is hardly known, the theory that Stiphodon niraikanaiensis may have been carried by ocean currents is speculative. Therefore, Dr. Maeda is currently focusing on studies into the larval stage of the species’ life cycle. If changes in the shape and behavior of the larvae as they grow become clear, and if acquire more knowledge about the distribution and ecology of larvae in the sea, the whole life cycle of Stiphodon species may become clear. It is also expected that studies into the larval stage of the species could provide clues about the mechanisms of the larval dispersal of the goby by ocean currents.

Lastly, Dr. Maeda added that, Stiphodon multisquamus, another goby species which had been thought to be endemic to southern China, was recently found on the main island of Okinawa for the first time. This suggests a more complicated story concerning the distribution of larvae and ocean currents which connect the South China Sea and Okinawa. The big question is, where are these goby species born and how do they travel to Okinawa? Dr. Maeda will continue his exciting work on the ecology of the goby. Will he find Nirai Kanai?