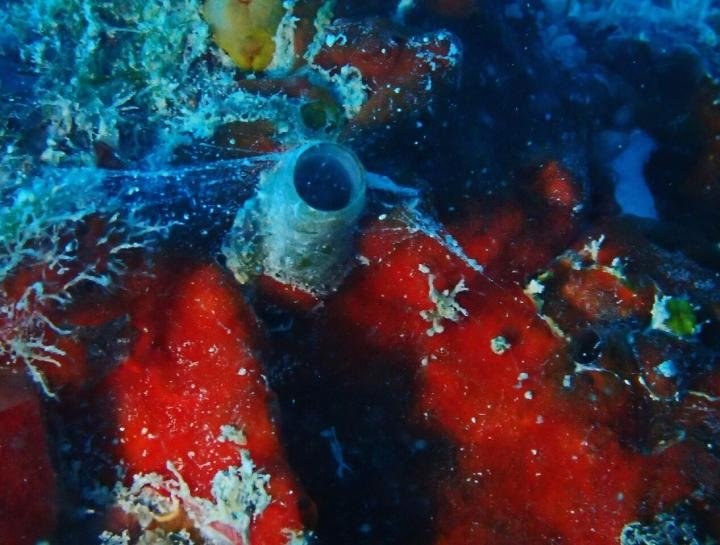 The new worm snail species is on its shipwreck home, with the mucus web it uses to trap food. The worm snail shell appears in this image as a blue-ish tube at the center of the photo; the mucus web is behind it. Credit: © Rüdiger Bieler, The Field Museum


Many reefkeepers know vermetid snails.  They look like tiny calcareous tube worms, but they are actually snails that remain stationary all their lives.  To feed, they cast out their infamous mucus nets, trawling back whatever gets trapped in their sticky slime.

This mucus net can cause great harm to coral reefs; reefkeepers who have had vermetid infestations can attest to their destructive nature.  The mucus can smother their neighbors such as corals.  Recent research has shown that fish grazers refuse to eat algae that is covered in this mucus, which eventually can cause algae to overrun corals that weren’t already suffocated by the mucus themselves.

Thus, finding vermetids in Florida raises alarms.  Researchers believe these snails may have stowed away on ships from Pacific reefs.  (Ironically was first discovered on USNS General Hoyt S. Vandenburg, a retired naval vessel intentionally sunk to serve as an artificial reef in the lower Florida Keys.)  Thus far, their presence appears to be limited.  But scientists are naturally watching this suspected non-native species with a careful eye.  Should they become a widespread invasive species, the Caribbean will have more alien species to worry about than lionfish. 🙁

What’s brightly colored, lives on shipwrecks, filter-feeds like a whale, and shoots webs like Spiderman? If you can’t readily come up with an answer, that’s okay: until now, such animals weren’t known to science. But as of today, scientists have announced the discovery of a new species of snail that ticks all those boxes. According to its discoverer, the snail shows “amazing adaptations and are kind of cute,” and it could play an important role in coral reef restoration work.

“These worm-snails are particularly weird animals,” says Dr. Rüdiger Bieler, Curator of Invertebrates at Chicago’s Field Museum and the lead author of a paper in the journal PeerJ describing the new snails. “And while we find lots of unusual snails, this one could have a substantial impact on coral reef restoration efforts.”

Instead of having coiled shells like most snails, worm-snails have irregularly-shaped tubular shells that they cement onto a hard surface. And while most snails are slow movers, adult worm-snails don’t move at all — instead, they stick to one spot for the rest of their lives. That makes them good candidates to live on hard surfaces like ships and coral reefs. The new species, Thylacodes vandyensis, is named for the “Vandy,” the nickname the SCUBA diving community has given to the USNS General Hoyt S. Vandenburg, a retired naval vessel intentionally sunk to serve as an artificial reef in the lower Florida Keys. This ship is the only place the new worm-snails have ever been found, glued to the vessel’s hull.

“I first got interested in these guys when I saw their giant slime glands,” says Bieler. “Normally, snails produce a trail of slime so that they can glide on it in order to move. But worm-snails are stationary — what did they need slime glands for?”

It turns out, these snails don’t use their slime to move — they use it to hunt.

“The snails have an extra pair of tentacles down near the base of their body, almost like little arms. These tentacles are what they use to shoot slime,” explains Bieler. “They shoot out a mucous web, just like Spiderman — although in slow motion. Then, microorganisms get stuck in the web, and the snails use their mouths to pull the web back in and strain the food through barbs on their tongues called radulae in order to eat. They filter-feed, much like baleen whales.”

While the worm-snails are immobile, Bieler and his co-authors from The Field Museum, Florida International University, and Cape Breton University have reason to believe that the specimens they found in Florida are a long way from home — all signs point to these snails being an invasive species from the Indo-Pacific where they had not yet been recognized.

“We know the Atlantic worm-snail fauna very well, so the likelihood of finding a new species native to the Florida Keys is pretty small,” says Bieler. “These snails might have stowed away in bilge water or the hulls on cargo ships, and once they arrived here, they were the perfect colonizers.”

The shipwrecks making up an artificial reef in the Keys seem to have been an ideal new habitat for the worm-snails. The new snails join other animals that have already been confirmed as Pacific invasives on these artificial reefs in the Florida Keys: the Orange Tube Coral and a Giant Foam Oyster, the latter discovered by Bieler’s team on another regional wreck, the Thunderbolt, in 2003.

“The living coral reefs in the Florida Keys are already full of animals,” explains Bieler, “but the deliberately scuttled shipwrecks are empty, brand-new real estate. There were fewer organisms to compete with for space on the artificial reef, and fewer resident predators that could harm them.”

But it’s not necessarily a good thing that the worm-snails have taken so well to the shipwreck. “Worm-snails can be harmful to corals and other reef organisms,” says Bieler. “They can reduce coral growth and have been shown to serve as hosts for certain blood flukes, which are parasites of loggerhead turtles.”

On top of the risks that worm-snails carry, coral reefs are in trouble all over the world. “Climate change, pollution, overfishing, and other problems are putting our reefs in danger,” says Bieler. “And while artificial reefs, such as deliberately sunk ships, might help provide additional structures for corals and other marine animals to live on, we need to carefully monitor the species present. If we don’t, non-native and potentially invasive species like Thylacodes vandyensis might eventually make its way from the artificial reef to the natural reef and cause trouble for the animals living there.”

Discovering the newly arrived snail and clam species, says Bieler, is an important step to monitoring coral reef health. “The artificial reefs could serve as the canary in the coal mine,” says Bieler. “If we monitor their presence on the shipwrecks, we can keep tabs on them and potentially stop them from spreading to the living reefs.”

Despite the havoc that the worm-snails could potentially wreak, Bieler is glad to have found them. “The discovery of Thylacodes vandyensis helps highlight why museum collections are important. Without comparing countless snail specimens at The Field Museum and around the world, we wouldn’t have been able to identify these snails as a new species, and we wouldn’t be able to make the kinds of progress in monitoring and reef restoration that we’re now equipped to,” says Bieler. “Plus, they’re awfully interesting.”