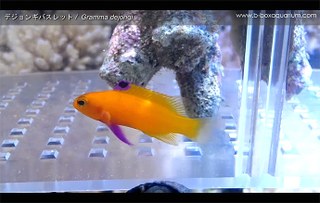 The Cuban Basslet (Gramma dejongi) is like a miniaturized golden version of the popular aquarium fish Royal Gramma (Gramma loreto).  Genetic analysis shows G.dejongi is closely related to G.loreto, only recently evolving into a new species.  Unlike its closest genetic cousin, the Cuban Basslet lacks the purple bicolored coloration and the black stripe across its eye and grows to half the size of the Royal Gramma – a maximum size of less then 2″ (45mm) in length.  It represents the fifth species of Grammatids.

Gramma dejongi was first discovered by Dejong Marinelife in early 2010 and formally described later that year. Specimens were observed and collected in 65-100 feet (20-30 meters) deep, cohabiting with G.loreto as well as G.melacara (the Black Cap Basslet).  FYI: The remaining two species of Grammatids are G.linki and G.brasiliensis.

This species is currently only known from Cuban waters, and as such, is prohibited from entering the United States due to the United States embargo against Cuba.  Specimens have slowly made their way into the aquarium trade by way of Japan, where Reefbuilders reports have been selling for a princely sum of $4,500 USD.  And now we have a video from B-Box Aquarium of a recently acquired G.dejongi.  Beautiful fish!  Alas, American aquarists will have to wait for either the lifting of the embargo or for captive bred specimens before we see Gramma dejongi in our aquariums.  Prices are likely to plummet if either scenario pans out, which would mean this species may one day be more accessible to more hobbyists.  Let’s hope!