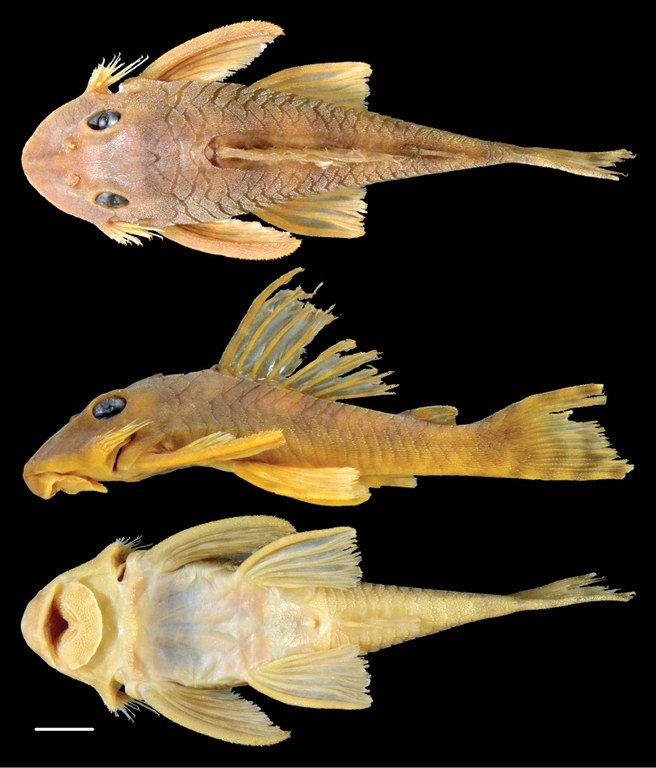 
The researchers describe the etymology of Peckoltia greedoi in this way:

Named for Greedo of Rodia, a bounty hunter killed by Han Solo in Chalmun’s Spaceport Cantina in the movie “Star Wars: Episode IV – A New Hope” (Lucasfilm, Twentieth Century Fox, 1977) with whom this species shares a remarkable resemblance.

P.greedoi, discovered from the waters of Brazil on planet Earth, is mostly reddish to dark brown so its etymology is definitely not based on color.  We assume the “remarkable resemblance” is based on the buggy alien eyes (photo,right).  Good enough for us!

The number of pleco species is fast approaching 1,000!  Still, many more species are yet to be formally described; a lot of variants are currently identified with the pseudo-scientific L-number system, which pleco afficionados are familiar with.  In fact, two more loricariid catfishes of the genus Pseudancistrus, P.kayabi and P.asurini, were just formally described just yesterday in another ZooKeys paper.

Expect hundreds more to come.  Whether any of them will be named after General Ackbar, Boba Fett, Jabba the Hutt, or Wedge Antilles remains to be seen.