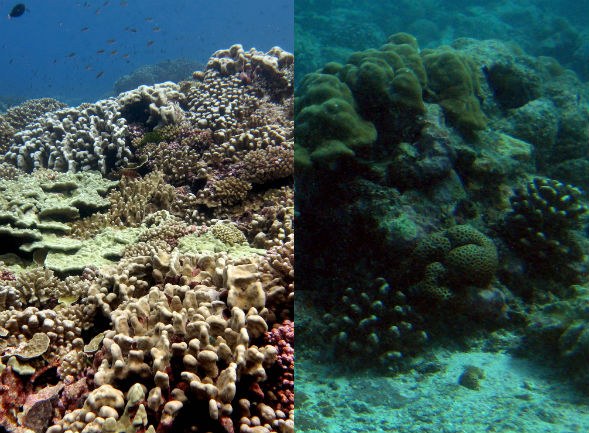 On the left is a coral-covered reef. On the right is one dominated by algae. Photo courtesy: Linda Wegley Kelly


From the San Diego State University (by Michael Price)

The study’s lead author, Linda Wegley Kelly, is a postdoctoral scholar in the lab of SDSU virologist Forest Rohwer. She’s been involved in some capacity with Rohwer’s lab for the past 13 years, beginning as a lab technician.

For the study, she looked at seawater samples collected from the surfaces of reefs surrounding all 11 of the Line Islands, a chain of atolls in the central Pacific Ocean. Over the past five years, Kelly and her colleagues have made sporadic trips to the islands, collecting the samples with a specially adapted bilge pump that sucks up approximately 100 liters of water in a given area.

Kelly sequenced the microbiomes of the samples to determine the DNA encoded by the viruses, bacteria, archaea (tiny, single-celled microorganisms like Halobacteria), and protists (similarly tiny eukaryotic microorganisms such as diatoms) all living in the same space. Within these millions of DNA sequences, Kelly found that certain types of bacteria predicted whether the reef was predominantly composed up of coral or algae.

The preponderance of either of these organisms has huge ramifications for the health of the surrounding sea.

“Corals are fierce competitors for space on the reef,” Kelly said. “In a healthy marine environment, reefs support a vibrant population of corals and other calcifying organisms that continuously build the reef skyward.”

If reefs are dominated by algae, however, the entire habitat dissolves over time and the fish don’t have anywhere to go, Kelly explained.

When she sequenced the surfaces of algae-covered reefs, Kelly identified microbes that may contribute to an ecological feedback loop which impairs coral growth. Her study was published this week in the Proceedings of the National Academy of Sciences.

Another observation, that the reef microbiomes on unpopulated islands were more similar to one another than to other geographically closer — but populated — islands, suggests that the entire community of reef inhabitants, including the microbes, is more significantly influenced by the degree of the reef’s coral or algal cover than researchers previously realized.

Her results have implications for conservationists looking for ways to improve strategies for managing coral reef ecosystems.

“How do you create an environment for corals to thrive?” Kelly asked. “In addition to practicing sustainable fishing, one way to rehabilitate a reef would be to transplant corals to the site. This should promote an environment more conducive to coral growth by fostering a beneficial community of microorganisms.”