How to Acclimate Saltwater Fish 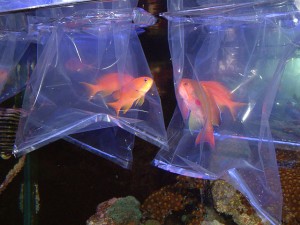 Acclimation procedure is ingrained in every advanced marine aquarist. While it’s of dramatic importance, it seems like no two aquarists use the exact same procedure. Fish stress is a major contributor to loss of livestock. Once removed from the ocean, these animals are literally on a whirlwind journey before reaching our tanks. I’ve written before about acclimation procedures that use a quarantine tank to match shipping bag’s water, allowing for a faster acclimation and getting your new tenant in an aquarium as soon as possible. To take it one step further, I want to talk about scenarios were acclimation should be avoided altogether, by first admitting that such scenarios do exist. 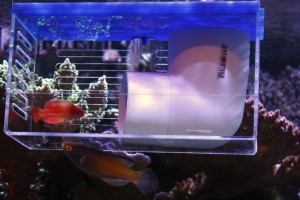 Acclimation serves to ease the transition of fish from one environment to the other. There are a host of parameters that fish are sensitive too: osmotic pressure, temperature, salinity, ph, etc. To make matters worse, when fish are shipped overnight ammonia concentrations within the water can increase, along with Co2 and a lack of breathable oxygen. It’s for this reason that acclimation becomes a bit like triage. Not only does the transition to a new environment need to be gradual, but fish need to quickly end up in an environment that can support marine life.

Long drawn out drip acclimation seems to be common among aquarists. They work well at slowly (in some cases very slowly) transitioning environmental conditions, but place fish in a confined area for a long time. If shipping water parameters when a fish arrives are in dire condition, a long drawn out drip acclimation may put the final nail in the coffin. 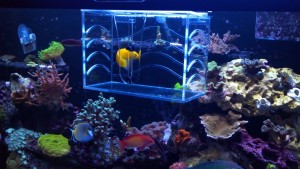 Acute stress usually comes on quickly, causing a serious reaction that can cause death. One sure fire sign of acute stress is a rapid rate of breathing. Acutely stressed fish will often display a subdued color (with some appearing very dark) or swim to the side, even floating belly up. Being cold blooded, cool water slows a fish’s nervous system and sends them into a lethargic state, in some cases appearing dead. I have had instances were a fish arrived, and upon opening the bag you could smell an unpleasant odor, which was possibly built-up ammonia.

This is where the triage part of acclimation kicks in. Usually when fish are shipped overnight in the winter, temperature drops cause them to appear lethargic. Believe it or not, fish can tolerate temperature swings up to 10 degrees F. So if your fish arrived in water that is 68 degrees, a fast transition shouldn’t (note I said shouldn’t, no guarantees) be enough to shock and kill it. Anything beyond 10 degrees needs addressed. 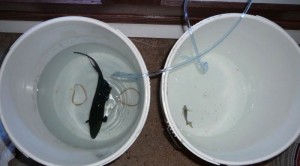 Step one is always to get the fish out of the bag and into a bucket or container that will allow you to work. Water testing is crucial, as you need to know water ph, temperature and salinity. If temperature within the shipping bag is more than 10 degrees less than the tank water, this is where to begin. Remember, rising temperature sets off a host of chemical changes. Ph will change; organic ammonia may become inorganic and thus toxic, etc. Before doing anything, you want to treat the fish’s water with an ammonia detoxifier. I use Seachem Prime, but any should work just fine. Instead of floating the bag, which causes for an abrupt change in temperature, I recommend using a heater to slowly increase the temperature in 5 degree increments. Say the bag water is 64, adjust the heater to 69, allow the temperature to rise, give it a few moments, then adjust it up to 74, continuing until you reach the tank’s temperature.

Since temperature is rising, oxygen within the water is depleting. I highly recommend having a CO2 scrubber on hand, to use in conjunction with an air pump. These are simple canisters filled with medical grade CO2 remover, and using one provides high quality air to your newly arrived animal. As soon as the heater is up and running, start aerating the water with an air stone. Usually within 15 minutes, the condition of your fish will improve, as the drip fills the bucket with fresh, healthy marine water, and temperature and 02 increases.

When Not to Acclimate 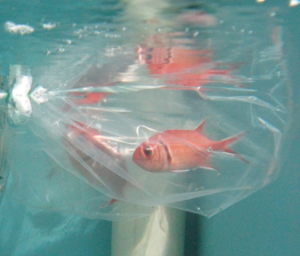 Acclimation is a juggle between the benefits of a slow transition into a new environment, and getting a fish out of the potentially fatal environment that is shipping bag water. If a fish appears dead, or is respiring rapidly and seems greatly agitated, it may be best to skip acclimation altogether. It’s for this reason that I keep my QT tank at 74 degrees when expecting new arrivals. This temperature allows for a wider range of acceptable change, in the event a fish arrives cold. Always perform a salinity test on the bag water, and adjust your QT tank as best as possible to match it before releasing a fish without any acclimation.

A seasoned aquarist can usually visually inspect fish behavior, and make a confident call as to whether or not a specimen is stressed to the point that acclimation could be fatal. It’s vital to understand that if a fish is severely stressed, and is released into the tank without acclimation, any current animals occupying the tank are likely to aggressively harass the new fish. Fish can quickly sense a weak link in their chain, and exploit that weakness to attack mercilessly. For that reason it’s best to have an empty QT tank ready when expecting new fish. 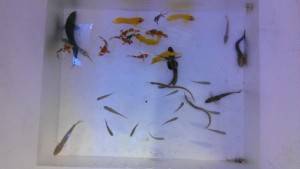 Acclimation doesn’t have to be a long, drawn out process. In fact, it benefits your animals if you can acclimate them quickly and effectively. Believe it or not, marine fish can adjust to a variety of changes in their environment with little long term ill effects. Drips during acclimation should be quick, a slow and steady stream of water, not a drip, drip, drip like a leaking faucet. Heating and aeration should be offered, only once an ammonia detoxifier has been added to the water. 45 minutes to one hour, of a quick drip and temperature increase should be more than enough time, prior to releasing your specimen into the tank.

Before leaving I would like to give a shout out to Blue Zoo Aquatics. A recent order I placed for Acanthurus fowleri was delayed over 24 hours by Fed Ex. This was during some cold winter days between the shipping terminal and my location. The fish arrived late the following day, and I totally expected it to be dead on arrival. Quite the contrary, the fish was slightly stressed, but otherwise healthy. After an acclimation similar to those spoken about here, the fish was released into quarantine and accepting food the following day. This scenario is a powerful statement about what can be accomplished when both providing high quality livestock and properly packaging fish for shipment. Nice work guys.