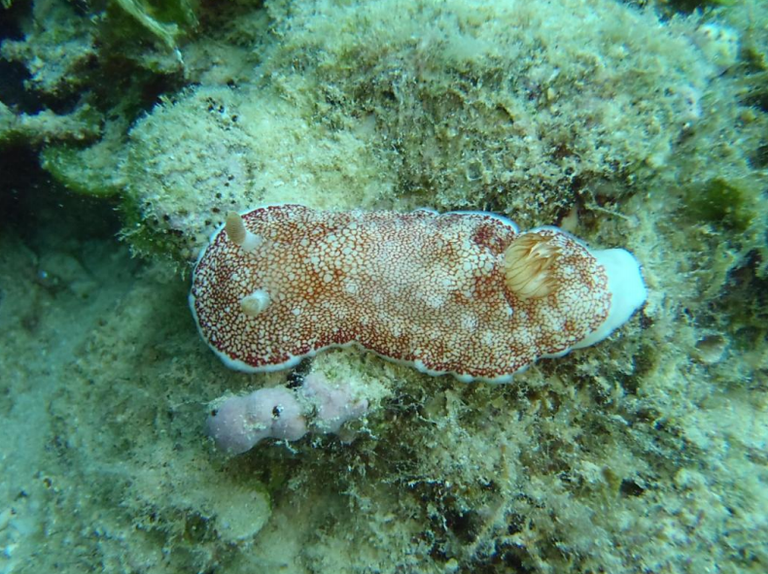 The study animal, Chromodoris reticulata (Quoy & Gaimard 1832) (Opisthobranchia, Nudibranchia, Chromodoridae), is distributed in the Indo-West Pacific. In Japan, C. reticulata occurs on the rocky coast of southern Honshu and around the Ryukyu Islands.


I just couldn’t post this on Valentine’s Day (but maybe I should have?).

Scientists studying the nudibranch Chromodoris reticulata (pictured above) discovered something startling when analyzing their mating behavior. The nudibranch has the ability to slough off its penis after copulation and regenerate it afterward!  The results of this study are published this week in the journal Biology Letters (pdf access available).

Chromodoris reticulata is a simultaneous hermaphrodites, meaning it possesses both male and female genitalia. Self-fertilization does not normally occur so it must mate with other individuals in order to reproduce. What the scientists did was collect specimens from a dive trip off the coast of Okinawa, Japan, and observed their reproductive behavior in aquarium settings:

Mating and morphology of the penis in Chromodoris reticulata. (a,b) Two individuals reciprocally insert their penis into the partner’s vagina. (c,d) Autotomized penes after copulation; the tip of the penis is swollen. A mass of sperm (sp) is attached to the thorny penis in (d).

They observed that 15-30 minutes after copulation, the nudibranch shed its penis and then regrew it in roughly 24 hours. The regrowth came from a spiral structure that extended outward after copulation, kind of like unspooling thread.  This unspooled tissue regenerated into a fully functional penis and allowed the nudibranch to copulate for as many as three times in three days before it became exhausted.