If you’ve never before heard of the Prismatic Eyebar Goby (Gnatholepis ophthalmotaenia), it’s likely because this is a name that I’ve literally just coined for a species that was until now referred to by an outdated and decidedly lackluster term. I’ve always been of the opinion that a creature’s common name should speak to some innate, observable quality inherent to its being, and, for G. ophthalmotaenia, it is nothing if not prismatic.

Gnatholepis is a modestly diverse genus of goby-like fish, oftentimes referred to as “eyebar gobies”, on account of the dark vertical marking beneath the eye. Ten species are known, and they occur across the world’s tropical waters, with representatives found on both sides of the Atlantic, as well as from the Red Sea to Easter Island and Hawaii in the Indo-Pacific. But despite their abundance and geographic ubiquity in the wild, few aquarists are likely to be familiar with them. While specimens do on occasion trickle into aquarium exports, it’s most likely as incidental bycatch rather than these having been directly targeted for collection.

And the reason for this is simple, most Gnatholepis are dull little beasts whose muted colors do little to entice (see video below). But this is not universal; there is one species which rises above this aesthetic apathy, a fish of sublime chromatic beauty that has been tragically underappreciated. Fully dressed in its breeding regalia, males of G. ophthalmotaenia are a sight to behold as they raise their fins to spar with one another. A potpourri of markings splash this fish with aquatic wonderment—reflective cyanescent spots, constellated dark stipples, red and orange maculations, and a series of dusky saddles ventrally. The pelvic fins are saturated with a translucent shade of saffron, whilst the semaphoric anal fin glows yellow, save for the red stigmata that line it irregularly. And, yes, such flowery prose is necessary when describing it, even if these words fail to do its dashing good looks justice. 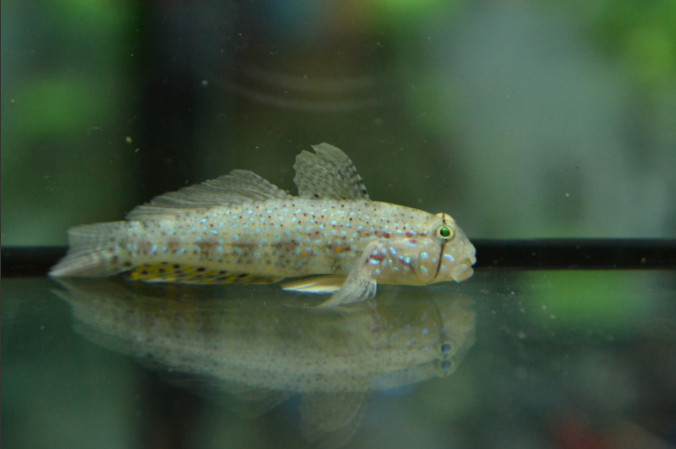 Aquarium specimen of G. ophthalmotaenia in Japan. This is a male; females are considerably drabber. Credit: Aqua Stage

You’ll find the Prismatic Eyebar Goby across the Coral Triangle, with reports from the Ryukyu Islands of Japan south to Vanuatu and west to Cocos-Keeling. The species occurs in shallow inshore waters (0-12 meters), in everything from tidepools to mangrove swamps to seagrass meadows, and, most commonly, it can be found in sandy or rubbly substrates near to coral reefs. It is regarded as being somewhat less common than its congeners in the region (G. cauerensis, G. anjerensis, G. yoshinoi), but it is by no means a rare fishy and it could certainly be targeted for more collection if demand existed for it.

Now, earlier I alluded to this being a “goby-like fish”, and we should take a moment to follow up on that thought, as there’s an interesting distinction to be made. Historically, the gobies have been regarded as the largest single family of fishes, but recent studies into the group’s evolutionary history have repeatedly shown that there is a major divide which can be used to neatly group these fishes into two sizable lineages. It’s all terribly controversial for those pedantic enough to care, but some have sought fit to recognize a new family, the Gobionellidae, for this second clade of gobioids. But are they still to be considered “gobies” when they are no longer in the true goby family? (These are the esoteric questions which keep me up at night.) Gnatholepis is a gobionellid, and, in fact, it’s really the only true reef-associated genus in this group—others are either freshwater, brackish or found in silty habitats remote from the reef itself. This also makes Gnatholepis the gobionellid most appropriate for housing in a reef aquarium.

If you search about the internets, you might stumble upon an alternate appellation associated with this fish. Earlier field guides have mistakenly applied the name G. davaoensis, which is now recognized as a synonym thanks to a recent revision of the group. And this is where the rather prosaic common name “Davao Goby” comes from, after the Philippine city where specimens were first collected. The epithet “ophthalmotaenia”, described by none other than Pieter Bleeker, comes to us from the Greek for “eye band”, alluding to the dark bar beneath the eye. This is all well and good, except we already have an Eyebar Goby (G. anjerensis), hence the need for a newer, better sobriquet—the Prismatic Eyebar Goby.