“Just like in the space, there isn’t anymore a top or a bottom. There isn’t anymore upside down and wrong side out. The ocean becomes cosmos, the man a satellite, and the bottom of the sea an unknown planet. Welcome in the fascinating universe of Ocean Gravity” – Guillaume Néry

When diving, once you achieve neutral buoyancy, you get to a point where you experience a feeling of complete weightlessness – a calming, spatial freedom – you’re simply suspended there. In the depths of Tiputa – Rangiroa, French Polynesia, a commanding drift draws French, record-holding freediver, Guillaume Néry, swiftly over the seabed. Markedly, no special effects were employed to create this seemingly otherworldly short film titled “Ocean Gravity”, beautifully captured by underwater cameraman (and Néry’s girlfriend) Julie Gautier. 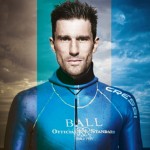