Ocean sunfish and the albatrosses that clean them 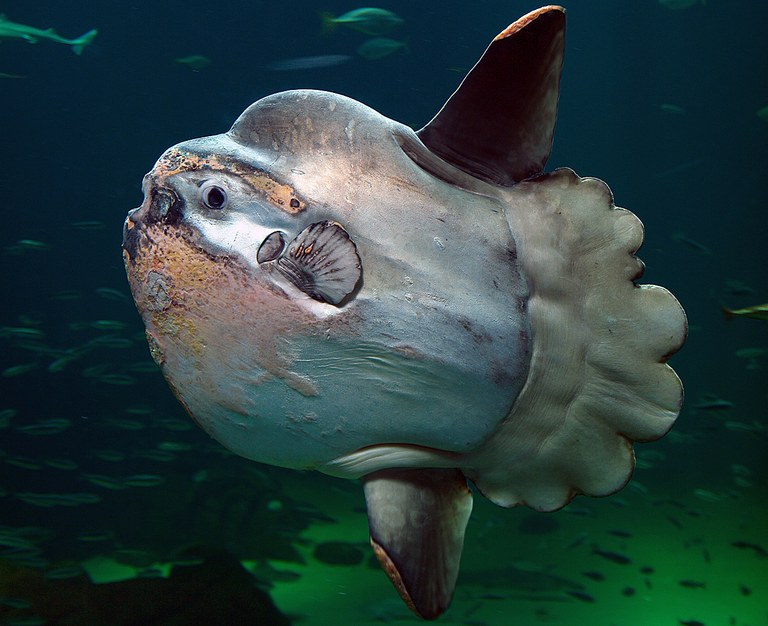 Sunfish at the Nordsøen Oceanarium in Hirtshals, Denmark.


As I mentioned before, ocean sunfish (Mola mola) are the heaviest bony fish known reaching weights upwards of 2,200 lbs (1000 kg).  Their body shape is incredibly strange, resembling a flattened fish head with large dorsal and ventral fins extending upwards and downwards at the end of its body.  Their diet is predominantly jellyfish, which is surprising given how large these fish can grow at adulthood. The fish gets its common name from its tendency to sun itself at the surface of the water either by itself or in shoals of multiple fish.

These large fish are prone to parasite infections and in the case of sunfish, over 40 different species of parasites could potentially live both internally and externally on them. To remove these parasites, sunfish will find free-floating kelp fields which harbor cleaner wrasses and other fishes that will pick the parasites off of their body.

In their paper “Observations on a school of ocean sunfish and evidence for a symbiotic cleaning association with albatrosses,” Takuzo Abe and other researchers observed a shoal of small oceanic sunfish (~40 cm in length) in the western North Pacific Ocean basking at the surface. These fish were heavily infested with ecto-parasites (Pennella sp.) based on the researchers’ observations. As it so happened, a group of Laysan albatrosses were floating nearby and the shoal of sunfish seemed to shadow these albatrosses for the length of the researchers’ time in the area.  During this time an albatross was observed to swim up to one of the sunfish and pick off one of the Pennella and eat it (photo above). Abe’s group hypothesizes that this could very well be typical cleaning behavior for these fishes.