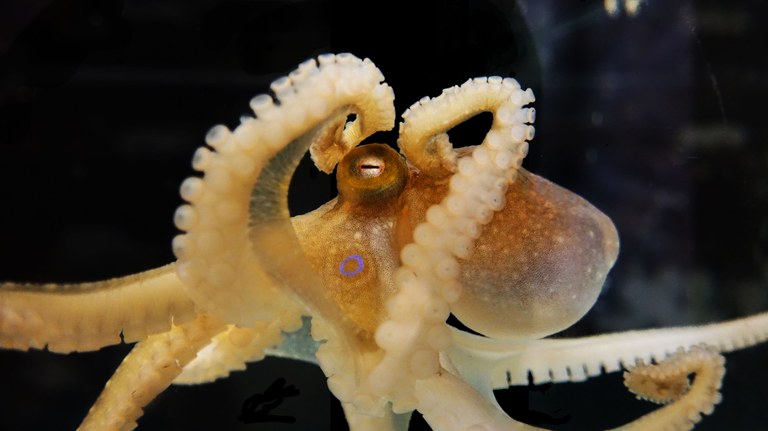 Octopus bimaculoides, also known as the Californian two-spot octopus, whose genome was sequenced. The Californian two-spot octopus is immediately recognizable from the blue spots on either side of its head. The spots are a pair of false eyes that can glow, and are used to fool both victims and larger predators into thinking they are its actual eyes. This species lives for one to two years. Photo Credit: Judit Pungor

From the Okinawa Institute of Science and Technology – OIST:

Decoding the Genome of an Alien

Imagine a skeleton-less creature with three hearts, with most of its nearly half a billion neurons distributed in eight tentacular arms. Each arm can regenerate like the mythical Hydra and has a mind of its own. Its muscles stiffen into temporary elbows and shoulders. This creature has the eerie capability of perfect camouflage and decorates its lair with leftovers of its prey.

Such is the bizarre reality of an octopus. Octopuses represent the pinnacle of an evolutionary track alternate from man. They are cephalopods, a group of organisms including squid and cuttlefish that descended from a slow-moving, snail-like ancestor and became active, resourceful predators. Even though modern day snails, oysters and other mollusks have all evolved equally from this common ancestor in terms of time, octopuses somehow gained seemingly extraterrestrial capabilities. The secret lies in their genome

A team of researchers from the Okinawa Institute of Science and Technology Graduate University (OIST), the University of Chicago, and the University of California, Berkeley have sequenced and analyzed the genome of an octopus species, making it the first cephalopod to be decoded. They published their findings in Nature. The genome-wide analysis was led at OIST by researchers in the Molecular Genetics Unit.

While the octopus genome resembles those of other marine invertebrates in many respects, it also revealed unexpected features that are key to understanding the origin and function of its unique nervous system. Cephalopod brains are elaborations of the basic invertebrate brain, and have a completely different organization than what is found in humans and other vertebrates. Cephalopods emerged as predators in the ancient oceans over three hundred million years ago. “They were the first intelligent beings on the planet,” quipped Nobel Laureate Dr. Sydney Brenner, founding President and Distinguished Professor of OIST. Prof. Brenner was fascinated with the great sophistication of their nervous system and initiated the octopus Genome Project as the first of several important genome projects that have become a hallmark of OIST. The complexity of the octopus genome presented a major challenge.

The octopus genome encodes several large gene families that may hold the key to how the animal wires up its complex brain – these gene families are involved in regulation brain development in other animals, but they are vastly expanded in octopus. Their detailed role, however, remains unknown. Hundreds of other genes that are common in cephalopods but unknown in other animals were also found. Some of these are implicated in the dynamic skin of cephalopods that enables spectacular camouflage. Some of the team’s findings raise questions about our understanding of genomic reorganization through evolution.

The large genome size of the octopus was previously believed to be the result of whole genome duplication events, which can also be seen in the genomes of vertebrates, including humans. Such events create additional genetic material for evolution to work with. The octopus genome, however, shows no evidence of such a dramatic event in its evolutionary history.

Besides recognizable genes, vast swathes of the genome consist of regulatory networks that control how genes are expressed in cells. In the octopus, nearly half of the genome was found to be composed of mobile elements called transposons, one of the highest proportions in the animal kingdom. Transposons replicate and move around with a life of their own, disrupting or enhancing gene expression and facilitating reshufflings of gene order. The researchers found many of them to be particularly active in the octopus nervous system.

Genes that are grouped together on chromosomes in other animals were dispersed in the octopus genome, likely as a result of transposon activity. The “Hox” genes, involved in embryonic development in all animals, are a particularly dramatic example. Although clustered together in most animals, including other mollusks, they are scattered in snippets in the octopus, presumably enabling the evolution of the versatile cephalopod body plan.

Analysis of the sequenced octopus genome is far from exhausted. The sequenced genome also provides a reference for scientists studying cephalopods to investigate other species of these exotic animals. Future inquiry also relates to cephalopod genes and regulation relevant to the development and functioning of the nervous system. As some of those genes are already active at the embryo stage, their expression can be biochemically interfered with. Researchers can then watch out for divergences in the grown organism.

“To do all this, we need to be able to raise animals in the lab and have a better idea of what their normal behavior is, so we can recognize what has changed when a gene is deleted or disrupted. This is a big project, the kind that can only be done in a multidisciplinary environment like OIST,” said Daniel Rokhsar, head of OIST’s Molecular Genetics Unit.

Humans invented flying machines by mimicking birds. We can look forward to octopuses inspiring robots that give us easy access to the ocean floor.

As humans, we like to think we are unique in evolutionary terms, but the octopus could reveal that this is not the case. One reason the octopus fascinates scientists is that its brain became organized to be able to carry out such incredible, complex tasks without adopting the principles of the vertebrate brain.  Further examination will tell if the building blocks of its nervous system are as radically different from those of vertebrate landlubbers like us, as the octopus’s abilities suggest.

This is not as unlikely as it sounds. Even if the octopus evolved in a completely different ecosystem, evolution can have only so many solutions to a given problem. If similarities are in fact found, this would significantly alter our perspective on the emergence of life elsewhere in the universe.

“The octopus appears so utterly different from all other animals, even ones it’s related to, that the British zoologist Martin Wells famously called it an alien. In that sense, you could say our paper describes the first sequenced genome from an alien,” said Clifton Ragsdale, Associate Professor of Neurobiology and leader of the team that worked on the octopus at the University of Chicago.