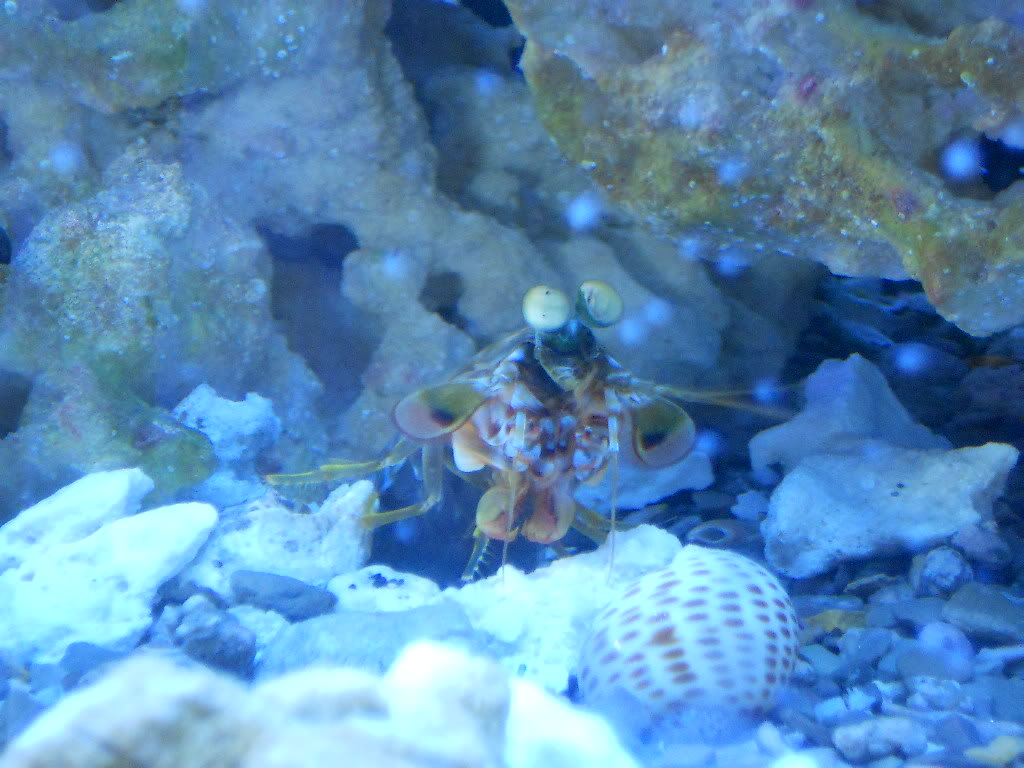 One of the greatest parts of this hobby is the seemingly endless choice of creatures we can select from and keep in our marine aquariums. If you’ve been considering making a Mantis shrimp a pet and if you wouldn’t mind a smaller sized smasher then read on inside 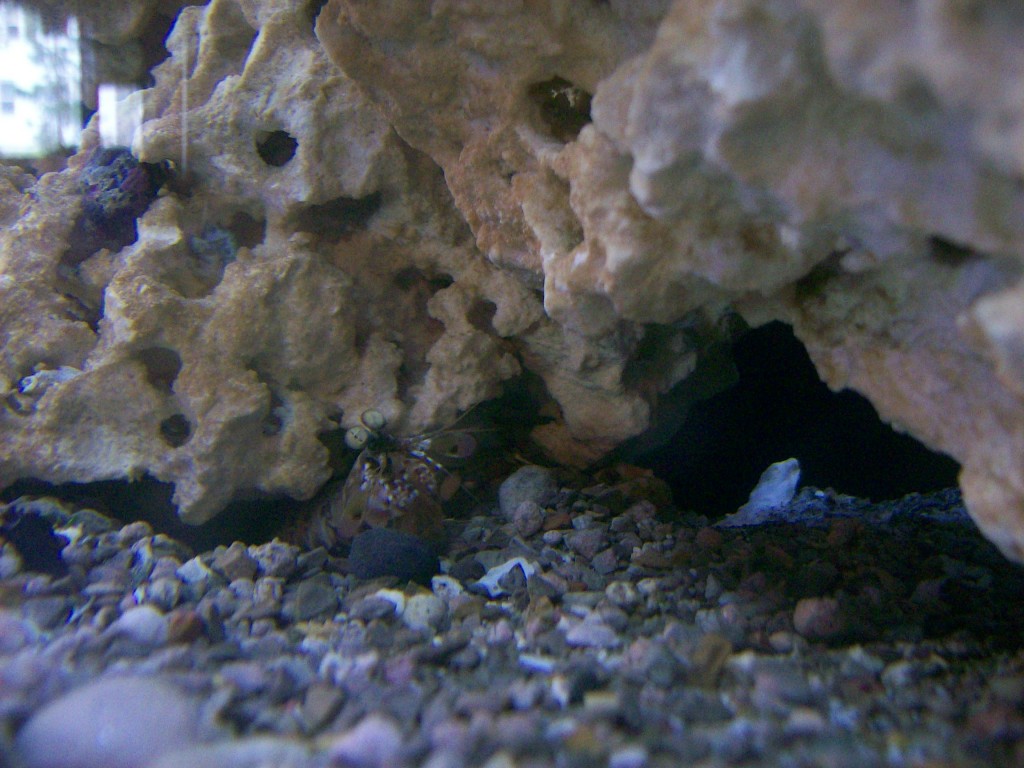 Not camera shy at all, Carniceria poses for the photo

When it comes to intelligence, activity and interactivity, O havanensis, has filled the bill and is by far the most interesting mantis shrimp of the 3 small smashing species of mantis shrimp I’ve kept. Though they are called shrimp they actually are of the phylum Arthropoda, sub-phylum crustacea and order of Stomatopoda.

Highly evolved and intelligent creatures with eye’s that make yours and mine obsolete by comparison. They are capable of tetra-chromatic vision, utilizing the ultra-violet wave lengths as defense in detecting and evading predators. In 2008, Sciencedaily.com ran an article claiming that Stomatopods may even use light emitted from their eyes to communicate with one another and just last month Physorg.com had an article explaining how researchers may be able to improve the quality of  high definition media like Blu-ray, television signals and holographic technology by researching how mantis shrimp view the world they live in. The discovery of the mantis shrimps ability to see circularly polarized light is the driving factor behind the research of better waveplates.
I began keeping them 2 years ago after removing a very small 1″ N. Oerstedii from a clients rockwork. This one was different in that instead of the usual drab, mottled coloring that is normal for the species, this one had a beautiful blue/green carapace and swimming legs.  I was able to keep it in a 10 gallon for nearly 3 months before it succumbed to a bad molt. A very unfortunate common occurance and down side to keeping these interesting animals. However, during that time I was able to purchase a rare Gonodactylaceus glaborous male and shortly after recieving him I ordered my O. havanensis.

Only a couple other of the readily available small smashers offer the color and beauty seen in the much larger O. scyllarus (Peacock mantis). The exception being of course the G. smithii (Purple spot mantis) and G. ternatensis (Orange spot mantis). When you look at either of the two aforementioned species, one has to wonder why the O. havanensis is commonly called the False peacock. With a mottled brown and white carapace that resembles the combat fatigues worn by soldiers in the desert theater, the only real “color” are the pink edged uropods, red dots on the tips of the antennal scale and red raptoral appendages, I don’t see the comparison. But when it comes to personality, activity and interactivity, this little mantis is peacock all the way. Only a couple days after acclimating and introduction to her new home she began to come out into the open with the lights on. 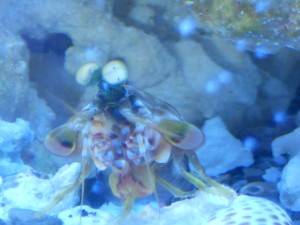 In less than a week she would immediately come  to the front entrance of her den and peer back at me. Within a month she didn’t bother to hide as long as I was the only person to approach the aquarium.

O. havanensis are native to the Caribbean and the found frequently in the coastal waters off of the Florida Keys in depths ranging from 49 to 164 feet, with the range of those depths being the most common they inhabit. Because of this they are common hitch-hikers in live rock purchased from suppliers that have permits to collect and culture rock in those waters. They do best in an aquarium of at least 20 gallons or larger. A deep bed of coarser sand with loose shells and live rock rubble is best. All of the rock work in the aquarium needs to be secured and stabilized. I would suggest using acrylic rod to construct support legs for the base layer of rock and using glue and epoxy to bond the stacked pieces above the base. Havanensis like to dig, a lot. Mine has constructed a den with two chambers that cover an area 2/3rd’s the size of the base line of rock. So you can understand the great need for stability in your aquascape. As they dig they will use their raptoral appendages, or smashers, to chip out the ceiling above and create chunks of rock to use as tunnel support and a door at night. Their den usually has at least two exits but one is used primarily. Each exit is sealed with bits of shell and rubble rock as darkness falls. 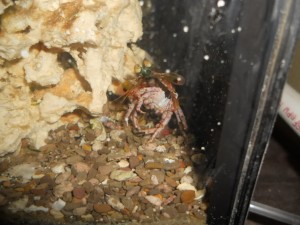 O. Havanensis is a generalist when it comes to dinner time. They especially love small crabs and hermits but will also eat small snails. I keep an assortment of emerald crabs, micro-porcelain crabs, dwarf ceriths and small peppermint shrimp in the sump under her aquarium. When the snails in the tank thin out I add a handful more. The shrimp and crabs are expensive so they are treats only given a couple times a month or when a friend wants to witness her bashing her next victim to a pulp and consume the remains. Her voracious appetite and the furousity of her blows while killing her meal gave her the name Carniceria which roughly translated means Butcher.  I regularly feed her a blend of chopped deli shrimp and crab meat two times every other day.

They are very intelligent creatures and agile swimmers. It is not uncommon for them to figure out the top of the tank is open and rocket out of the water. I have never had a jumper but I have witnessed Carni studying the lay out of the upper levels of the tank from the very top rock in the stack. I’ve also witnessed her study the swimming pattern of her tank mate, a yellow tailed damsel that I’ve named Filet VanDamsel. On more than one occasion I have seen her chasing him through and around the rock work, swimming with the grace of a veteran fighter pilot chasing an enemy jet down the length of the Grand Canyon. Sometimes she will sit on a rock ledge just above the main entrance of her den and watch the blue fish swim for a while then disappear, only to reappear out of nowhere in a hiding place directly in the fish’s path. She hasn’t caught him yet, he continues to out swim her but she gets close.

So if you are thinking you would like to keep a mantis and wouldn’t mind one that only grows about to a maximum of nearly 3 inches long but packs a powerful punch and the power to win your heart I suggest the Odontodactylus havanensis. The little mantis with the huge personality.

If you have never kept stomatopods I would like to say that they are, in my opinion not for everyone. Just like fish some variances are more hardy than others and each has a separate list of needs. Dr. Roy Caldwell is probably, if not the most studied researcher of the order Stomatopoda. I highly recommend searching out and reading a number of his articles and researching the animal you wish to purchase before purchasing it. General information of Stomatopods for the aquarium can be found here.