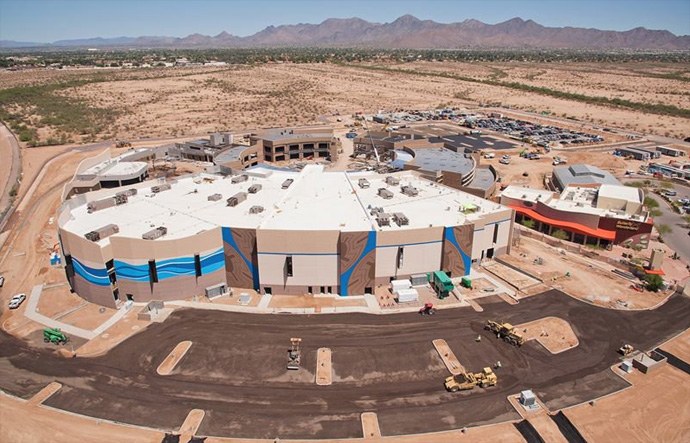 An Oasis In the Desert

The OdySea Aquarium will house over 200,000 square feet of aquatic exhibits totaling over 2 million US gallons spanning two stories.  Visitors can trek between the two stories inside an acrylic-tube escalator (or an elevator) that travels through the inside of the main tank.

The experience begins in the aquarium’s lobby, where a dozen, large, sphere-shaped aquariums dangle from the ceiling with each sphere weighing 7,500 lbs (nearly four tons). OdySea claims this is a public aquarium first.

At the heart of the aquarium is a 3D theater that revolves on a massive carousel.  At the conclusion of the 3D show, the screen lifts to reveal a view into the first of five live aquarium exhibits.  The carousel slowly spins the audience across each exhibit very much like that scene in Jurassic Park (only bigger and less dinosaurs).

OdySea Aquarium will take full advantage of the hot Arizona climate by featuring an outdoor experience where patrons are invited to view life in a literally immersive way called SeaTrek: patrons can walk underwater at the bottom of a tropical reef aquarium aided with a breathing helmet.

Other exhibits include tanks showcasing rivers across the globe, a Great Barrier Reef aquarium, a martini-shaped aquarium stocked with jellyfish, interactive touch pools, a penguin exhibit, and of course a shark tank.

Below is a video showing how much work goes into constructing a massive public aquarium.

OdySea has not set a final date for its grand opening, but expect late Summer 2016.  Visit OdySea’s website for more information about the public aquarium.