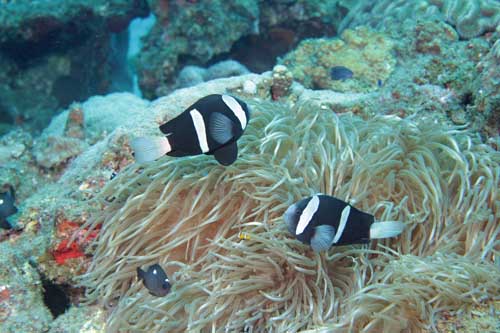 The Amphiprion anemonefishes are a group in desperate need of renewed taxonomic study. Despite there being numerous books and articles devoted to this hugely popular genus, our understanding of their evolutionary history and speciation is still quite piecemeal and often outdated. There are currently 29 recognized species, but this represents just a small fraction of the true biodiversity present in the Indo-Pacific. Many widespread species are in fact comprised of readily identifiable regional populations, and nowhere is this phenomenon more apparent than with the ubiquitous Clark’s Anemonefish. In total, there may be more than a dozen distinct species (or subspecies, if you’re so inclined) masquerading under this name, each restricted to its own small corner of the ocean. One of the more recognizable of these, and also one of the rarest, is a melanistic variant that apparently occurs only at the isolated Ogasawara Islands.

One of the great difficulties in studying these fishes has been their tendency to vary dramatically in coloration depending on which anemone they happen to be hosting in. There is typically a dark (=melanistic) morph associated with individuals hosting in Stichodactyla anemones and a light morph for those occurring in other host species. Researchers have tended to overlook this important fact and, but in doing so they have also overlooked some consistent biogeographical differences which serve to separate the light morphs found across this complex’s vast range. As can be seen in the map included here, the population occurring in the Persian Gulf look little like those from the Philippines or the Great Barrier Reef or Guam, etc.

For now, I’d like to focus on one of the few members of this group which has previously been scientifically described—Amphiprion snyderi. This name dates back to 1904 and was given to specimens collected at the Ogasawara (Bonin) Islands. This small archipelago, situated at a biogeographic crossroads between the Japanese and Micronesian fauna, is noted for its high level of endemism, with the most noteworthy example being Genicanthus takeuchii.

Since its description more than a century ago, taxonomists have favored synonymizing A. snyderi, treating it as nothing more than a dark morph of a widespread Amphiprion clarkii. But there is a critical difference with this one population… there is NEVER a light morph at the Ogasawara Islands. Even when this fish hosts in the Bubbletip Anemone Entacmaea quadricolor—a species which, in other parts of its range, is not known to induce melanism—we still find fully black specimens. This would have been impossible for earlier workers to have known, and, in all likelihood, there is probably little, if any, morphological difference to be found between the various members of this species complex other than their coloration.

But this distinction is important to make, as it provides strong evidence that the Ogasawara population is unique, and, in all likelihood, so are all of the others that we currently lump into Amphiprion clarkii. The same can be said for other widespread clownfishes, such as A. chrysopterus, A. melanopus and A. akallopisos, and, undoubtedly, we will eventually see significant changes to the taxonomy of this genus when we at last begin investigating the group’s population genetics. For fans of rare clownfishes, don’t expect to ever find the Ogasawara Black Anemonefish available in aquarium stores. Since it occurs only in the waters of this one small archipelago, which, as a UNESCO Natural Heritage Site, is fully protected from aquarium collection, this species is likely destined to remain a “book fish” for the foreseeable future, and, rightfully so, as this is surely one of the rarest clownfishes in the world.