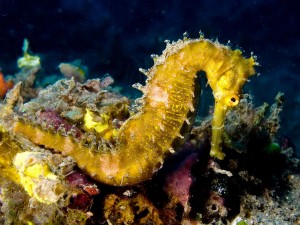 Well this is kinda sad. Britain’s Studland Bay use to be the home of over 40 Spiny Seahorses (Hippocampus histrix) in 2008. However, after an 80-hour survey this year in search of the spiky little ponies, they turned up with nothin’ at all and only one has been spotted in the past year. While boaters deny this claim, experts suspect that anchors tear up the eelgrass that these little guys call home. One day in July, as many as 350 boats were studded throughout the bay, plopping their fat anchors on the delicate seaweed. Andy Jackson, an underwater camera man, spotted one this past August that he followed for about an hour. He admits while they haven’t been seen, the H. histrix, much like its other Hippocampus relatives, are masters of disguise and could very well be hidden within the bay. Boaters say the seahorse’s absence is a mystery, and the figures are being spun to but unnecessary restrictions on them.

But Mr Jackson insisted: ‘Something’s definitely changed. There were lots of sightings in 2009 and 2010 and they weren’t so hard to find. People could see two or three on one dive.

‘I’ve seen and filmed the anchor damage myself and seen what it does to the eelgrass.

‘Whether it’s a natural cycle and they’ll return again, I don’t know, but when you see the damage done by anchors it’s a no-brainer – that must be stopped.

‘You wouldn’t have to get rid of the boats. It’s just a case of putting in moorings that don’t damage the seabed.’

Conservationist are warning that unless action is taken to product their habitat, the adorable seahorses will be nothing more than a memory in the Studland Bay. Sounds like it’s time to add the bay to the United Kingdom’s 500-plus Marine Protected Areas. Check out this article at the Daily Mail for more details and more squee-worthy photographs. 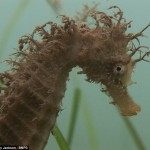 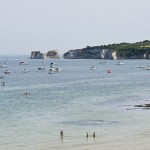 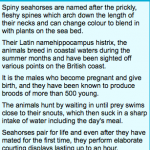