On November 5, 2015, two dams holding tons of mining waste and toxic mud containing minerals including iron, aluminum, manganese and mercury, collapsed. The mining company Samarco was in responsible for the dams. This catastrophic event has been referred to as one of the worst environmental disaster’s in Brazil’s history. The mud flowed through nearby villages including the mining community of Mariana in the Minas Gerais state, killing over 17 people and injuring hundreds more. 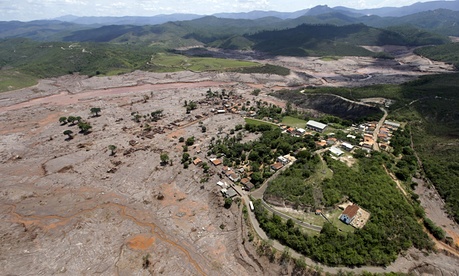 The Mud also flowed into nearby waterways, including the Doce River, killing marine and animal life alike. Samarco has stated that it is providing  support to ‘Operation Noah’s Ark’, which is focusing on saving aquatic life from the polluted Doce river. Biologists are on site on the river attempted to transport the marine life. So far, Samarco has stated that they have provided six 1,000-liter tanks to hold the fish taken from the Doce river, as well as two trucks for transport to area lakes. Experts worn that the environmental effects could last a decade. Experts also say that the Abrolhos archipelago, a group of five small islands with coral reefs off the southern coast of the Bahia State, could also be at risk from the mud tide. Currently, there are no reports on the toxicity of the mud on humans.MORE