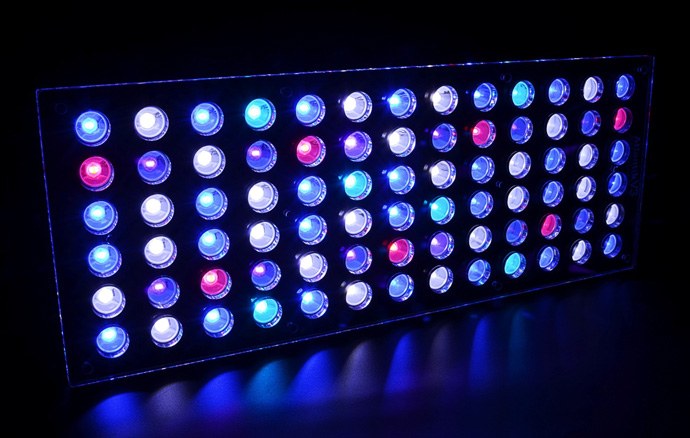 The Orphek Atlantik V3 LED light with all diodes on

The new Atlantik V3 is here and we have listened to our customers and updated the V2.1 with several new changes.  So what’s new in the V3?

The Atlantik V3 is now assembled with glossy black acrylic and will only be available in black.  Compared to the V2.1, the look is profoundly more attractive.  All LEDs are five watt dual diode LEDs.  This increases the number of LEDs from 78 to 156.

The LED channel layout has also changed and with our new LEDs and channel layout, Kelvin temperature can be changed by adjusting intensity levels in two channels.  This allows the user to create the ideal spectrum for the life forms he is keeping, including warmer shallow water species where most colors are not filtered out by the water.

In the V3 we have altered the spectrum in each channel slightly to allow more control over the white temperature allowing a more natural display.  Below is a breakdown of each channel’s features:
Channel 1
Channel 1 features a 20K Kelvin temperature but does not appear as blue as a metal halide 20K lamp.
Channel 2
Channel 2 features 460nm LEDs which give you a skylight blue color.
Channel 3
Channel 3 is our violet channel which features all 410nm wide range LEDs and two, 420nm wide range LEDs.  This mix fully covers the 410-420nm range which promotes chlorophyll A production in coral.  Channel 3 also enhances the florescence in coral in areas where blue LEDs fail to do.
Channel 4
Channel 4 is a mix of wide range red and high Kelvin white LEDs.

The Atlantik V3 is shown on the right and the V2.1 is the model on the left


Coverage
One Atlantik V3 will easily cover the same area as two units of most other available brands and provide a higher PAR/PUR ratio.  With the narrow lens installed, the V3 is capable of growing coral in tanks over 48 inches deep.

LED Driver
We use the best LED drivers available.  All models except our NR12 use Mean Well Industrial grade LED drivers with a high IP rating for the utmost in safety and electrical protection for your investment.

Construction
The V3 is very robust and much heavier than models from other companies.  All acrylic panels are thick and made from the finest quality acrylic.

Circuit board
Our circuit boards are modular in design and vital components can easily be changed by the end user so returning a unit is never necessary.  The IC chip and wifi module are plug in devices and require no soldering.  The boards are sprayed with a protective coating to protect the components from the harsh salt water environment.  A lithium battery backup is provided to save your program in the event of a power failure.

Control
Programming is accomplished with an Android smart phone or tablet.  In addition to the installed programs, any installed program can be modified and saved as another program without losing the installed program. Multiple units can be programmed as one with the use of a compatible WLAN router.  Up to 26 modules can be used with one router.  There are no expensive hubs or programming devices that you must purchase to operate the V3.

LEDs
The LED’s used in the V3 are five watt dual LEDs and are made to our exacting standards.  Our Atlantik V3 features seven different types of LEDs which we feel are needed to create the ideal spectrum needed for excellent coral growth.  It also surpasses other brands for both shimmer and coral color.  All V3 models feature dual LEDs.

PAR/PUR
All Orphek LED lighting provide the highest PAR/PUR per watt than most other brands and is very capable of lighting coral tanks over 48 inches deep!  Power output at 100% intensity with all four channels driven is 186 watts.