Around this time last year, a flurry of media coverage was directed at the exciting “discovery” of a large coral reef ecosystem found lurking in a very unexpected location—the mouth of the Amazon River. But as it turned out, this wasn’t the first time that someone had stumbled upon these unusual reefs. Evidence of their existence has been around since the 1970’s, buried in research collections and obscure literature. It’s only now that we’re finally getting a good look at what lives here.

This video footage was filmed by a team of Brazilian researchers and Greenpeace environmentalists, and it accompanies a new study published in Frontiers In Marine Science. Using manned submersibles and drop cameras, they succeeded in documenting a variety of habitat types at depths of 70-220 meters… everything from reef platforms and walls to sponge bottoms and rhodolith beds, a strange underwater world where balls of coralline algae roll about the ocean floor. In the very deepest portions studied, the bottom was entirely covered in life—sponges, gorgonians, black corals.

Commercially important fishes, like the Snowy Grouper (Hyporthodus niveatus) and the Southern Red Snapper (Lutjanus purpureus) were found in relative abundance, along with a number of other smaller fishes that were often observed around the cleaning stations of Lysmata shrimp. Part of the excitement over the rediscovery of this reef relates to the important role it likely plays in connecting the larger populations of the West Atlantic. The thinking has long been that the turbid waters which spew forth from the Amazon would pose a significant barrier to the reef fauna of the Caribbean and Brazil, allowing the two regions to maintain some level of independence from one another.

Genetic studies in a number of fishes have backed this up, showing that the Atlantic fauna consists of two largely discrete regions, but, as we’ve seen with the recent invasion of lionfish in the Southwest Atlantic, this barrier is not unassailable. The Blue Chromis (Chromis cyanea) is a fish which has until now been thought endemic to the Caribbean, but the new discovery of its presence in the Great Amazon Reef helps to illustrate the important role that these poorly understood waters play in connecting the Atlantic.

As we begin to better appreciate the diversity of life occurring on these mesophotic habitats, it becomes incumbent upon us to help protect their fragile existence. There’s no telling what kind of long-term and widespread damage might come from the degradation of these reefs given their unique position at the Atlantic’s main biogeographical crossroads, but this certainly won’t stop oil and gas companies from drilling here. Several are already exploring in the region, even though the dangers posed by a spill here could be especially severe.

To date, it’s estimated that just 5% of the Great Amazon Reef has been investigated. This is surely one of the most enigmatic marine ecosystems on the planet, and one deserving of further study and protection. 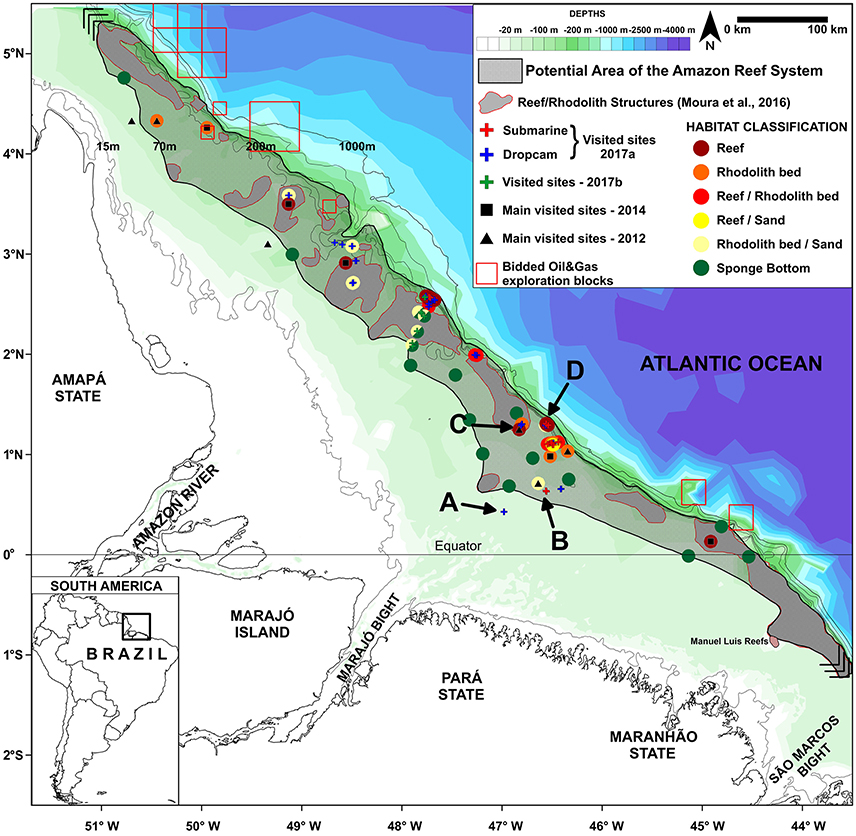