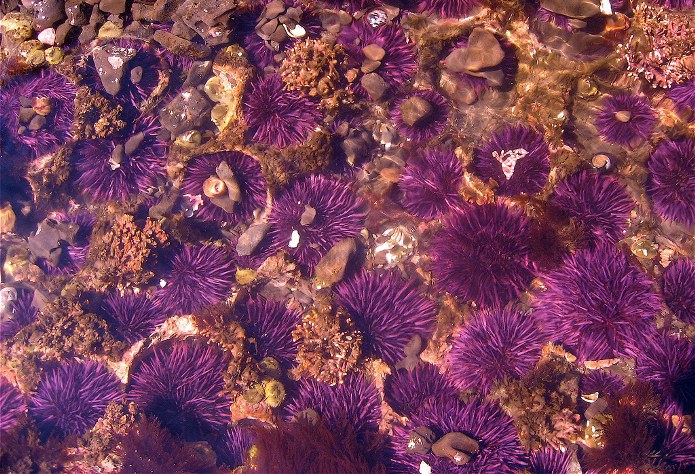 A field of purple urchins, each in a recessed hollow. Photo by Steve Jurvetson / Flickr.

Scientists initially observed that if large predatory fish were removed from the reef, sea urchin populations exploded. While this doesn’t necessarily sound bad, certain sea urchins feed on crustose coralline algae (CCA) and one interesting thing about CCA is that certain coral larvae species respond and settle out onto CCA. Therefore, the less CCA around a reef, the less potential there is for some species of coral to settle properly.

O’Leary and others studied three types of fisheries management systems:

In these management systems, they evaluated the taxonomic makeup of local CCA in addition to correlation of four families of coral to given species of CCA.

The research team found that the CCA cover for both the gear-restricted and open-access reefs were half of what it was on closed reefs and that the urchin populations were also significantly larger for the gear-restricted and open-access reefs as well. They also observed a positive correlation between Hydrolithon spp. CCA and four families of coral: Agariciidae, Faviidae, Pocilloporidae, and Poritidae. These four families of coral “preferred” settling on Hydrolithon spp. crustose coralline algae.

Based on the findings, O’Leary, Potts and others postulate that over-fishing reefs could not only have an effect on local urchin populations but on coral settlement too. Fisheries need to take this finding into consideration when drawing up rules and regulations for fishing practices in these areas.