Pacific Islands May Become Refuge for Corals in a Warming Climate, Study Finds 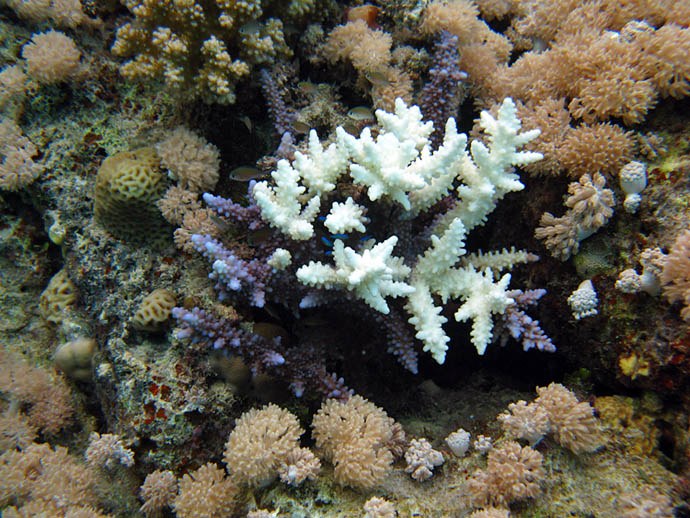 Corals exposed to warm that is too warm often lose the symbiotic algae that live in their tissues and provide them nutrition. They turn white, a phenomenon known as bleaching and a major cause of coral mortality, said WHOI coral scientist Anne Cohen. WHOI climate scientist Kristopher Karnauskas teamed with Cohen to study how global warming may affect reefs in the equatorial Pacific, using a fine-scale model to predict future water conditions around the Gilbert Islands. (Photo by Jessie Kneeland, Woods Hole Oceanographic Institution)

Here’s how it would happen, according to the study by Woods Hole Oceanographic Institution scientists Kristopher Karnauskas and Anne Cohen, published April 29 in the journal Nature Climate Change.

At the equator, trade winds push a surface current from east to west. About 100 to 200 meters below, a swift countercurrent develops, flowing in the opposite direction. This, the Equatorial Undercurrent (EUC), is cooler and rich in nutrients. When it hits an island, like a rock in a river, water is deflected upward on the island’s western flank and around the islands. This well-known upwelling process brings cooler water and nutrients to the sunlit surface, creating localized areas where tiny marine plants and corals flourish.

WHOI climate scientist Kristopher Karnauskas examined this global satellite map of chlorophyll in surface waters. Higher chlorophyll is shown in green, yellow, and red; lower in aqua, blue, or purple. Chlorophyll indicates the growth of phytoplankton. To the left of South America, a line of green chlorophyll extends left (westward) toward the left edge of the map. (Image courtesy NASA)

On color-enhanced satellite maps showing measurements of global ocean chlorophyll levels, these productive patches of ocean stand out as bright green or red spots, for example around the Galapagos Islands in the eastern Pacific.

But as you look west, chlorophyll levels fade like a comet tail, giving scientists little reason to look closely at scattered low-lying coral atolls farther west. The islands are easy to overlook because they are tiny, remote, and lie at the far left edge of standard global satellite maps that place continents in the center.

When he changed the map view on his screen in order to see the entire tropical Pacific at once, he saw that chlorophyll concentrations jumped up again exactly at the Gilbert Islands on the equator. Satellite maps also showed cooler sea surface temperatures on the west sides of these islands, part of the nation of Kiribati.

“I’ve been studying the tropical Pacific Ocean for most of my career, and I had never noticed that,” he said. “It jumped out at me immediately, and I thought, ‘there’s probably a story there.’”

So Karnauskas and Cohen began to investigate how the EUC would affect the equatorial islands’ reef ecosystems, starting with global climate models that simulate impacts in a warming world.

Global-scale climate models predict that ocean temperatures will rise nearly 3oC (5.4oF) in the central tropical Pacific. Warmer waters often cause corals to bleach, a process in which they lose the tiny symbiotic algae that life in them and provide them with vital nutrition. Bleaching has been a major cause of coral mortality and loss of coral reef area during the last 30 years.

But even the best global models, with their planet-scale views and lower resolution, cannot predict conditions in areas as small as small islands, Karnauskas said.

So they combined global models with a fine-scale regional model to focus on much smaller areas around minuscule islands scattered along the equator. To accommodate the trillions of calculations needed for such small-area resolution, they used the new high-performance computer cluster at WHOI called “Scylla.”

“Global models predict significant temperature increase in the central tropical Pacific over the next few decades, but in truth conditions can be highly variable across and around a coral reef island,” Cohen said. “To predict what the coral reef will experience under global climate change, we have to use high-resolution models, not global models.

“Our model suggests that the amount of upwelling will actually increase by about 50 percent around these islands and reduce the rate of warming waters around them by about 0.7oC (1.25oF) per century,” Karnauskas said.

A handful of coral atolls on the equator, some as small as 4 square kilometers (1.54 square miles) in area, may not seem like much. But Karnauskas’s and Cohen’s results say waters on the western sides of the islands will warm more slowly than at islands 2 degrees (or 138 miles) north and south of the equator that are not in the way of the EUC. That gives the Gilbert Islands a significant advantage over neighboring reef systems, they said.

“While the mitigating effect of a strengthened Equatorial Undercurrent will not spare the corals the perhaps-inevitable warming expected for this region, the warming rate will be slower around these equatorial islands, which may allow corals and their symbiotic algae a better chance to adapt and survive,” Karnauskas said. If the model holds true, then even if neighboring reefs are hard hit, equatorial island coral reefs may well survive to produce larvae of corals and other reef species. Like a seed bank for the future, they might be a source of new corals and other species that could re-colonize damaged reefs.

“The globe is warming, but there are things going on underfoot that will slow that warming for certain parts of certain coral reef islands,” said Cohen.

“These little islands in the middle of the ocean can counteract global trends and have a big impact on their own future, which I think is a beautiful concept,” Karnauskas said.

“The finding that there may be refuges in the tropics where local circulation features buffer the trend of rising sea surface temperature has important implications for the survival of coral reef systems,” said David Garrison, program director in the National Science Foundation (NSF)’s Division of Ocean Sciences, which funded the research.

Right: The Gilbert Islands lie in a line across the equator, and the Equatorial Undercurrent spans the area from about 2 degrees (138 miles) north to 2 degrees south of the equator. Chlorophyll values, shown in shades of green, decline from east to west but they increase again around the islands. To the east of the Gilberts are the Galapagos Islands, where the Equatorial Undercurrent (EUC) hits the islands and brings nutrients and cooler water toward the surface around the islands. (Courtesy of Kristopher Karnauskas, Woods Hole Oceanographic Institution)

The Present: At the equatorial Pacific Gilbert Islands, east-to-west trade winds produce a surface current along the equator. The Equatorial Undercurrent (EUC) develops at 100 to 200 meters depth, flowing in the opposite direction, west to east. When it hits a barrier (an island), the cooler, higher-nutrient water in the EUC flows up toward the surface. The waters near the island exhibit both cooler temperatures (shown as blue) and higher productivity of chlorophyll-containing marine phytoplankton, both of which diminish to the west. (Illustration by Amy Caracappa-Qubeck, Woods Hole Oceanographic Institution)

The Future: Global climate models predict a sea surface temperature rise of nearly 3 degrees C (5.4 degrees F) by the end of the century. According to Karnauskas’s and Cohen’s fine-scale model, equatorial trade winds will weaken, causing a weakening of the surface current. In turn, the frictional drag on the EUC will lessen, and the EUC will strengthen, carrying more cool, nutrient-enriched water to the surface around the Gilbert Islands. The result will be enhanced productivity close to the islands, and slower warming during the coming century than neighboring islands not in the EUC’s path. The slower warming may allow corals to adapt and survive, making the Gilberts a refuge for coral reef ecosystems. (Illustration by Amy Caracappa_Qubeck, Woods Hole Oceanographic Institution)

The Woods Hole Oceanographic Institution is a private, non-profit organization on Cape Cod, Mass., dedicated to marine research, engineering, and higher education. Established in 1930 on a recommendation from the National Academy of Sciences, its primary mission is to understand the oceans and their interaction with the Earth as a whole, and to communicate a basic understanding of the oceans’ role in the changing global environment. For more information, please visit www.whoi.edu.