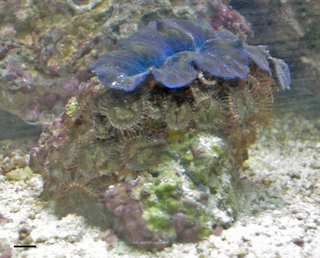 
As a long-time reefkeeper, I’ve understood that it was known that certain zoanthid species available in the aquarium trade could potentially harbor palytoxin and I’ve read posts on a variety of reefkeeping forums on the subject in the last couple of years. Apparently scientists from the US FDA didn’t realize this and after investigating two incidents of palytoxin exposure subsequently published a paper yesterday in PLoS ONE with their findings along with an example of an unfortunate reefkeeper that found out the hard way.

To give you a bit of background on palytoxin: palytoxin is produced by certain zoanthid species and has a LD50 in mice of just 300 ng/kg — meaning that 50% of mice dosed with just 300 nanograms of palytoxin per kilogram of body weight will die within a specified testing time. To give you a bit of scale on its potency: 1 gram of palytoxin can kill approximately 170 million mice – that’s a lot of mice! This toxin is second only to maitotoxin in its lethality which has an LD50 in mice of 50 ng/kg. Palytoxin targets the sodium-potassium pump proteins in cells and effectively shuts down the ion gradient that is essential for cell function. Symptoms of palytoxin poisoning include “angina-like chest pains, asthma-like breathing difficulties, tachycardia, unstable blood pressure, hemolysis (destruction of red blood cells), and an electrocardiogram showing an exaggerated T wave. The onset of symptoms is rapid, and death usually follows just minutes after.” (http://en.wikipedia.org/wiki/Palytoxin) It’s nasty stuff.

As mentioned in this paper, the scientists documented a reefkeeper that encountered palytoxin in his home aquarium in 2007. Apparently this unfortunate reefkeeper was attempting to remove some offending zoanthid species from rockwork in his aquarium and read someplace that boiling water would do the trick. During the removal process, he apparently inhaled some of the aerosolized palytoxin (in the steam) and encountered a severe respiratory reaction shortly thereafter.

Scientists from the US FDA were working on a similar case of dermal contact with palytoxin and learned about this event and they subsequently contacted this reefkeeper and obtained samples of the zoanthids from his aquarium. After positively identifying palytoxin in this reefkeeper’s zoanthids and narrowing down the species to Palythoa sp., they decided to investigate its general availability in the aquarium trade and traveled to three different aquarium stores within the Washington D.C. area. In all, they purchased 15 different colonies of zoanthids that were readily available for sale that were consistent with the visual description of Palythoa sp.. Using analytical techniques, they identified the zoanthid species and palytoxin responsible for this reefkeeper’s poisoning and also isolated palytoxin from four of the colonies of the 15 purchased zoanthid specimens.

According to the authors:

“This is the first report to our knowledge that documents both high PLTX [palytoxin] presence and phylogenetic identity for commercially available zoanthids from aquarium stores. …

During this investigation, we found that many of the zoanthids commonly sold in the home aquarium trade are non-toxic or weakly-toxic, but a highly toxic variety of Palythoa (possibly P. heliodiscus or P. toxica) is indeed available. It often occurs as a tank contaminant and can be unintentionally introduced with more desirable species or on live rock. …

Regardless, we have shown that a Palythoa sp. just as toxic as the legendary limu can not only be found outside of the tidepools at Mu’olea, it is available in retail commerce and present in home aquaria, with the owners often unaware of the deadly poisons they are being exposed to.”