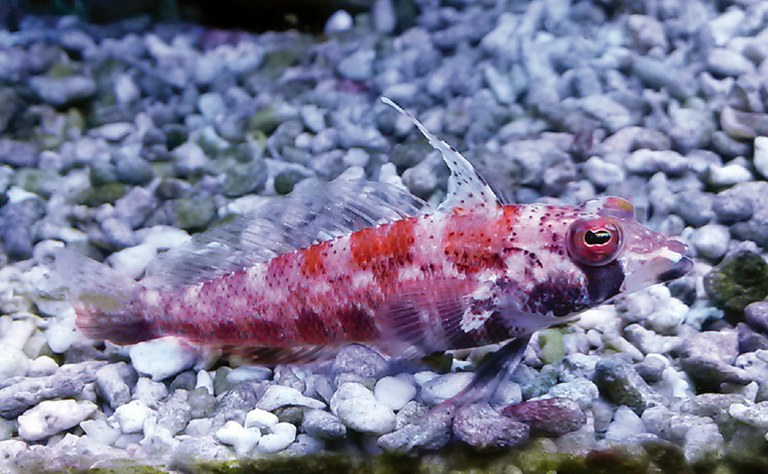 
Interestingly, the body of Parapercis altipinnis is more reminiscent of Plectranthias (e.g the Geometric Pygmy Perchlet) than other Parapercis sp., who have more elongated “lizardfish” like bodies.  The long, exaggerated first dorsal fin is also similar to those found on Plectranthia.

The authors of the Zootaxa paper share the “origin story” of Parapercis altipinnis:

In December of 2016, the second author sent photographs of a live sandperch purchased from a local aquarium in Belgium, to Dr. Kwang-Tsao Shao of the Academia Sinica, Taiwan, for identification. These photoswere then sent to the first author for comments. With an extremely high first dorsal fin and unique coloration, this specimen was identified as an undescribed species in the genus Parapercis.

The second author agreed to donate the specimen for further study – a task made difficult by the 10 000 km between Belgium and Taiwan! Fortunately, Prof. Jérôme Mallefet of Université catholique de Louvain, Belgium, helped to preserve the specimen, took photos and sent the specimen to Taiwan. Mr. Arie de Jong, the owner of DeJong Marinelife, where the fish had been purchased, kindly informed us that the specimen had been collected from Cebu, the Philippines, at a depth of between 55–65 meters by SCUBA.

As soon as the fish arrived, it was determined to be an undescribed species of the Parapercis cylindricacomplex (sensu Randall 2003).