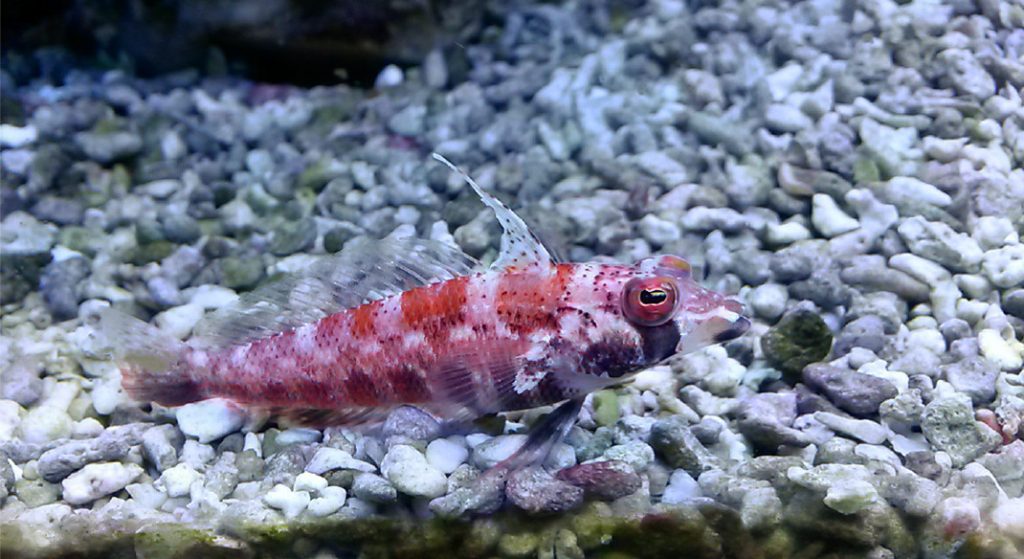 Late last year, a curious sandperch showed up at the Dutch aquarium wholesaler De Jong Marinelife. It had originated from Cebu, in the Philippines, from a depth of 55-65 meters. Parapercis is an enormously diverse genus in shallow tropical waters, with 88 species recognized. These fishes all look more or less the same, differing mostly in their color patterns, but the newly described P. altipinnis—species #89—is unlike anything previously known.

The most noteworthy feature of this fish is its greatly enlarged dorsal fin, which looks similar in shape to what we see in a male Mandarinfish or a Tangaroa goby. Now compare this to the typical sandperch, which has a low, rounded shape to the first dorsal fin. A series of red saddles run along the back, in addition to the complex patterning present along the sides, making for an altogether handsome little fish. The holotype specimen, thought to be a female, was ust 50mm in length. 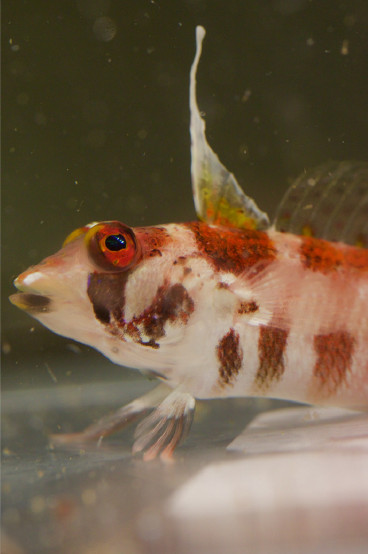 The dorsal fin of P. altipinnis is unlike anything else in the genus. It may also be sexually dichromatic, as the only other known image of this species (Kuiter & Tonozuka 2001) appears different. Credit: Jérôme Mallefet

The authors of this new species have placed it alongside several other taxa in a group called the P. cylindrica complex. None of these fishes (cylindrica, snyderi, lineopunctatus, binotata, australis, haackei) seem to have much presence in the aquarium trade, though many are quite abundant in shallow habitats. Interestingly, aside from the obvious difference in dorsal fin morphology, none of these species look all that much like P. altipinnis, and none are similarly restricted to mesophotic habitats. Their shared traits involve things like a subopercular spine and nuances of the teeth and scales; however, there wasn’t any genetic analysis to confirm this.

Thus far, the only known specimens of this fish have been the aquarium specimen from Cebu and an image taken in Bali, which appeared in Kuiter & Tonozuka’s Pictorial Guide to Indonesian Reef Fishes, where it is listed as Parapercis sp.5. The epithet altipinnis comes from the Latin for “long fin”, so you’d naturally assume that the common name for this fish might be something like the Hifin Sandperch. But, apparently not. For reasons that are not made known, the suggested common name for this fish is listed as Karen’s Sandperch. But, inquiring minds want to know, who is Karen, and how did she wind up with such a lovely sandperch? The ocean is full of mysteries, but none greater than this…