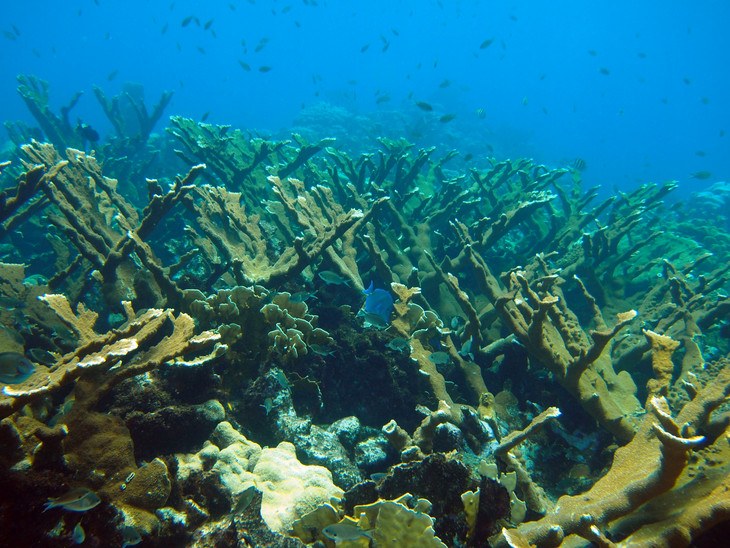 The survival of the Caribbean Elkhorn Coral, Acropora palmata, is threatened by increasing seawater temperatures, infectious disease outbreaks, and overfishing. Research by a team of Penn State scientists now shows that the spatial scale over which the coral host and its algal symbiont exchange genes is not well matched, raising questions about the ability of this symbiosis to adapt to a rapidly changing climate change.  Image: Iliana B. Baums, Penn State University

New research reveals that Caribbean corals and the algae that inhabit them form a remarkably stable relationship — new knowledge that can serve as an important tool in preserving and restoring vital reef-building corals. A scientific paper describing these new findings by a team of marine biologists at Penn State was published as a cover article in Molecular Ecology on June 10.

Coral reefs are important for protecting shorelines, providing seafood, and generating millions of dollars in recreation revenue each year, but rising water temperatures due to climate change are stressing many corals to the point of extinction. The Penn State researchers — Iliana Baums and Todd LaJeunesse, both associate professors of biology, and research technologist Meghann Durante — conducted a large-scale genetic study of Caribbean elkhorn coral, Acropora palmata. Once the primary reef-building coral species throughout the Caribbean, A. palmata now is listed as endangered under the U.S. Endangered Species Act. The biologists worked on the sub-species level using high-resolution genetic markers that allowed them to examine individual coral colonies and their symbiotic partnerships with single-celled algae.

“These big, orange, branching corals are very important for the ecosystem,” Baums explained. “They act like trees, building the three-dimensional structure of the reef, and their survival depends on a symbiotic partnership with single-celled algae. The algae live within the corals’ cells — it’s a very intimate relationship. We wanted to know more about that symbiosis at the sub-species level,” she said.

“When we looked at individual coral colonies we found that usually one host colony harbors only one strain of algae consisting of genetically identical cells,” Baums said. “This wasn’t clear before — we didn’t know whether there might be just one or many strains of that algal species in one coral colony.”

This new insight into the coral-algae partnership has implications for studying how corals adapt to changes in water temperature. When water temperatures increase just a few degrees, this partnership breaks down and the coral can die. “It’s getting hot,” Baums said, “and because this relationship is symbiotic, each partner needs to respond to the changing temperature. They have to evolve together if they’re going to survive.”

The video shows stands of the once-dominant but now-endangered Caribbean elkhorn coral, Acropora palmata, in Curacao. Researchers are sampling the corals to determine the relationship between the coral host and its algal partner using high-resolution genetic tools.  This video contains no sound.

To learn whether corals might adapt by switching to different symbiont partners over time, the researchers sampled coral colonies throughout the Caribbean over the course of several years. They found that, in most cases, the original partnership formed between a host coral and a symbiont strain remains intact. “It doesn’t look as if this species of coral will respond to climate change by switching partners,” Baums said. “They seem to be together for life. So the colonies acquiring a different strain of algae as a way of adapting to changing climate conditions doesn’t seem likely.”

The researchers wanted to learn more about gene flow among different populations of A. palmata corals, which would shed light on how much opportunity corals might have to switch symbionts. They examined the genetic patterns for coral hosts and algal symbionts across their Caribbean range in more than 700 colonies and found that the patterns of genetic exchange are not well matched. Symbionts exchange genes over a much smaller area, “so if there would be a beneficial mutation in the symbiont it would stay in a much more local area compared to the coral host,” Baums explained. “That means the evolutionary process between host and symbiont is more inefficient than we would hope for the sake of the corals’ survival,” she said.

“Still, the good news is that some of those partnerships work very well as they are — some corals may survive climate change better than others. We are just beginning to explore how species of corals and symbionts vary in their response to climate change, and also how individual combinations within species might perform differently,” Baums said.

Upon settlement, young elkhorn coral (Acropora palmata) as shown in this image must acquire their algal partner (Symbiodinium fitti) from the environment. The algal partner is a single-celled dinoflagellate. The partnership between the coral host and just one clonal strain of S. fitti persists over the lifetime of the colony. The performance of both partners will dictate how this colony responds to future environmental stress.  Image: Iliana B. Baums, Penn State University

The large-scale study and its focus on the sub-species level is expected to reveal valuable information about elkhorn coral’s ability to adapt to climate change. “Iliana had amassed the largest, most comprehensive sample collection of any species of reef coral, and that gives us the opportunity to examine the symbionts of this coral in extreme genetic detail across a single colony, among colonies from an entire stand, and from reef locations around the Greater Caribbean,” said LaJeunesse, whose laboratory examines the ecology and biogeography of these algal symbionts found in reef coral communities throughout the world.

“We didn’t understand this level of diversity before because we did not have the genetic tools to assess these symbionts at the individual strain level. We can see that not only does this particular coral associate with a single species of symbiont throughout its distribution, but also that the symbiont population in each colony appears to be highly clonal and stable,” said LaJeunesse.

These data offer critical insight into the evolutionary and ecological dynamics between host and symbiont. This knowledge improves the researchers’ overall understanding of reef coral biology and can help them to generate accurate predictions for how these organisms will respond to future climate change, LaJeunesse explained.

These predictions are especially critical for the Caribbean, which lacks the diversity of coral species found in the Pacific Ocean and has suffered greater loss of coral colonies than the Pacific has. “We’re at the point where we have very few really healthy reefs in the Caribbean,” Baums said, “and reef restoration is a priority. Because A. palmata is an endangered species, we want to conserve as much as we can. We can take coral samples and try to preserve as many combinations of host and symbiont as possible. The more diversity we have, the more likely it is that one of the coral-algal partnerships harbors beneficial mutations that allow it to survive changes. This is one tool we can use to decide which corals to bring into nurseries, to grow, and to replant back on the reef to restore healthy coral populations.”

The research was funded by the U.S. National Science Foundation, Division of Ocean Sciences (OCE 0928764).