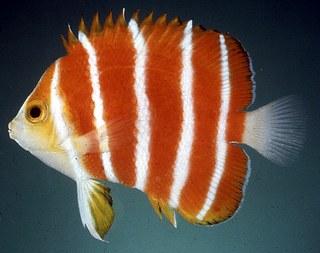 
The Peppermint Angelfish is arguably the most lusted-after marine fish in the world.  Only one known captive specimen exists, and we’re happy to report it is still doing well after two years in captivity. A video (shared on Glassbox Design’s facebook page) shows the Peppermint Angelfish looking as stunning as ever.  The angelfish resides in its own dimly-lit aquarium with no other fish.  The temperature is regulated between 69-71oF using two chillers (one for redundancy).

Centropyge boylei are deep water angelfish known only from the Cook Islands.  It is the most expensive marine fish in the aquarium trade, with a reported price tag of $20,000 USD!

The video quality is fairly poor and a few months old, but with the Peppermint Angelfish, any video or photo is deserving of sharing.