The Percula Clownfish Was Originally Named After Mike Tyson

No, I’m not making that up. The Percula Clownfish (Amphiprion percula)… AKA Nemo… was originally named after Mike Tyson. This is a verifiable fact, and, what’s more, today is this fish’s birthday. So please join me in wishing Mike Tyson’s Clownfish the very best on this special day. 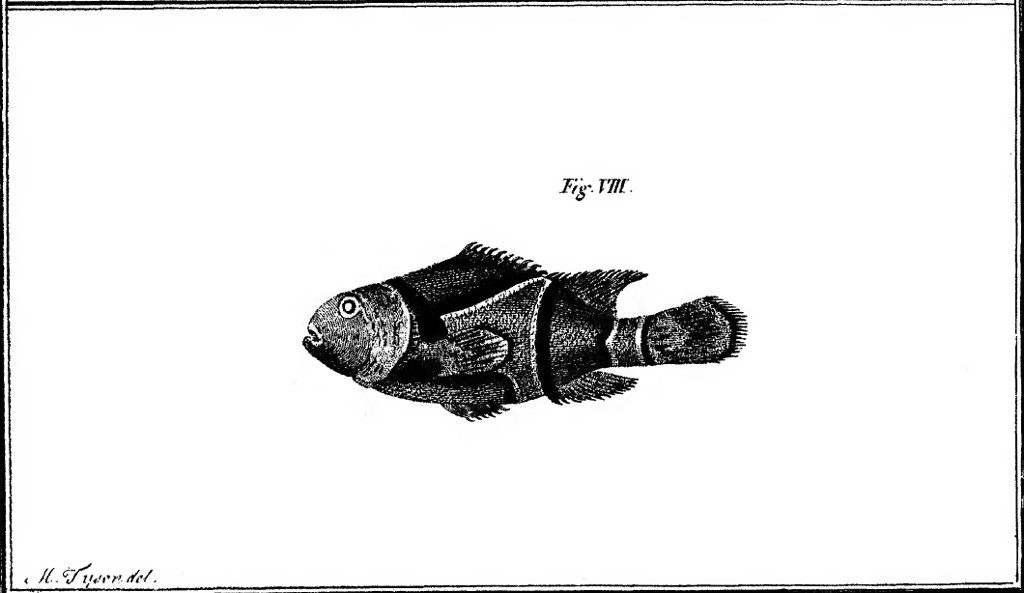 Now, I should probably clarify that statement a tiny bit. The illustration you see above is the very first image of a clownfish to ever appear in print. It comes courtesy of a brief scientific description published in the Philosophical Transactions of the Royal Society of London precisely 246 years ago today, on May 9th, 1771. In this letter, addressed to the Rev. Michael Lort—a notable clergyman, academic and antiquary in his day—a peculiar fish which had been collected by Commodore John Byron is related in some detail. 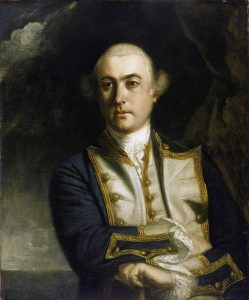 The Commodore had obtained this specimen at an unspecified location in the “South Seas” as part of his successful circumnavigation of the globe, which took place from 1764-1766. Unlike other expeditions of this sort, his little jaunt across the Indo-Pacific seems to have been focused more directly on establishing naval dominance and the claiming of new lands than in contributing to new scientific discoveries. Similar journeys, like those of Bougainville or Quoy & Gaimard, featured dedicated naturalists who tirelessly collected the many novel species encountered along the way, resulting in the scientific description of thousands of organisms. But this doesn’t seem to be the case for the Commodore’s trip, and it’s possible that the only fish he brought back to Europe for study was this one lonely Amphiprion.

The mid-eighteenth century marks the infancy of zoological classification, exemplified by the publication of Linnaeus’ Systema Naturae in 1758. In this hugely influential treatise—the first to codify the formal conventions of naming and classifying new animal species—only a single species of anemonefish is recorded, Perca polymna (now known as the Saddleback Anemonefish Amphiprion polymnus). So it’s not surprising that just six short years later, when the Commodore stumbled upon his fishy find, he hadn’t the slightest clue what he had discovered. And so he gave to it the sort of sensible common name that any respectable British naval officer would… the “Zebra Fish”.

In an effort to find a more precise identification for his colorful little discovery, the Commodore returned home and delivered his specimen, preserved in alcohol, to a relation of his—the Reverend Richard Farmer, noted Shakespearean scholar and Master of Emmanuel College at the University of Cambridge. It’s not clear why the Rev. Farmer was chosen to receive this fish, as, from all accounts, he had no particular expertise in zoology. In fact, his only work ever published was on (you guessed it) Shakespeare. But, clearly the “Zebra Fish” piqued his interest, and so he sent it along to a colleague of his at Cambridge who ultimately described it. This man was Mike Tyson.

Again, a little context is needed here. We’re talking about Reverend Michael Tyson—the eighteenth century clergyman, academic, antiquary, and artist—not to be confused with the contemporary pigeon-loving pugilist of the same name. The Rev. Tyson was clearly intrigued by this pickled piscine and, recognizing it as a species which had not yet been formally described, took it upon himself to provide a morphological description and illustration. Aside from his outstanding etching, his notes make mention of there being six black bars along the body and the dorsal fin having ten spines, allowing us to identify this specimen as Amphiprion percula with reasonable certainty. As there were no peer-reviewed taxonomic journals in those days, he sent this work off to the aforementioned Rev. Lort, who proceeded to publish it in the Philosophical Transactions. 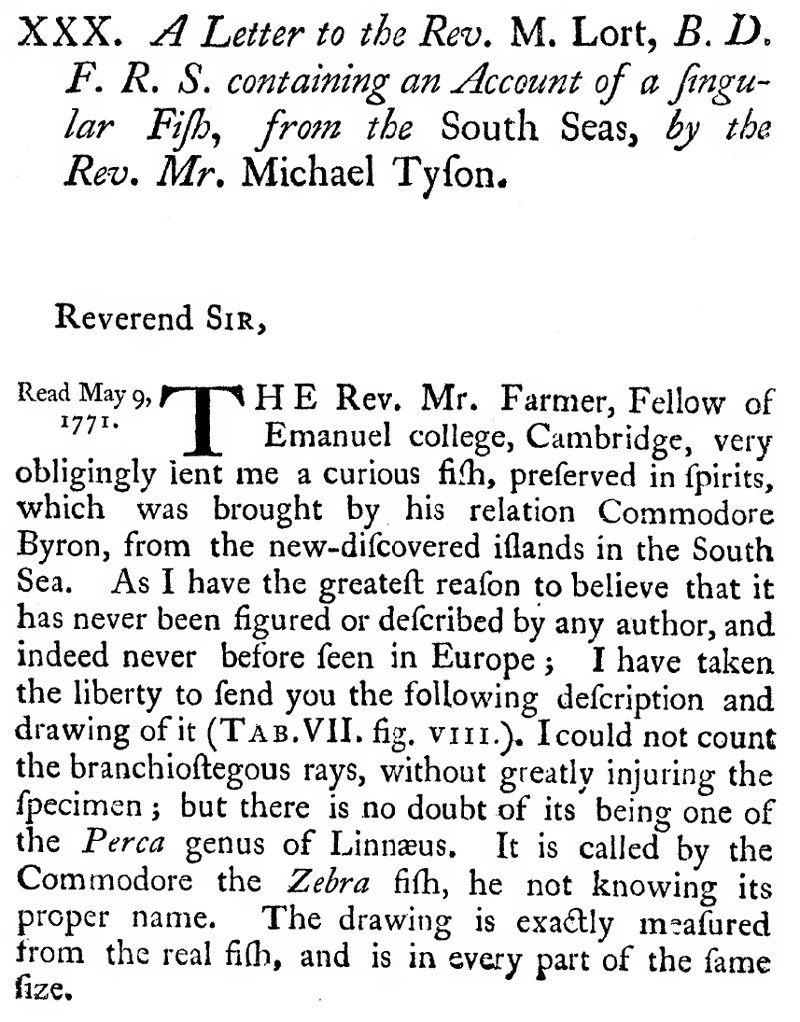 And the story might very well have ended here, with Mike Tyson scientifically describing the clownfish… but, alas, this was not to be. For you see, the Rev. Tyson was not a taxonomist and likely had no formal training as a zoologist, and, when he wrote to the Rev. Lort about his remarkable new fish, he committed the greatest sin one can make when describing a new species—he did not name it! He merely recognized it as belonging to Linnaeus’ previously published genus Perca, and, so, as dictated by the nomenclatural edicts which govern taxonomy, he is not to be recognized for his pioneering efforts in marine biology.

But the story does not end here, dear reader, because Mike Tyson’s clownfish did not go unnoticed. In 1792, the German physician and naturalist Johann Julius Walbaum published his Petri Artedi Renovati, a work intended to update the classification of Linnaeus’ Systema Naturae with the names of every fish described since its publication. In doing so, Walbaum named more than 200 new species, and included among these was Tyson’s anonymous clownfish, which was christened with a proper binomial that honored its original author, Perca tysonis. With a type specimen, a peer-reviewed description and illustration published in the leading journal of the era, and, finally, a true scientific name, you might wonder why this beloved fish is known today under a different name.

Amphiprion percula dates to the third volume of Lacépède’s epic Histoire Naturelle des Poissons, published in 1802. This is, obviously, a full decade after Walbaum’s naming of Perca tysonis, and, if you’re familiar with how taxonomy works, this should render Lacépède’s nomenclature invalid as a junior synonym. But, of course, this is not the case, and we can thank the eminent French zoologist Georges Cuvier for this. Cuvier was no fan of Walbaum’s work, owing to some weaknesses inherent to the descriptions in the Petri Artedi Renovati. As was often the case at the time, Walbaum’s species were rather inadequately diagnosed and were usually not illustrated, and, even more egregious, he failed to preserve a type specimen or list a type locality for his new taxa. So, Cuvier, arguably the leading zoological mind of the nineteenth century, dismissed this work entirely, which, in turn, relegated Walbaum’s publication (and the names contained therein) to the dustbin of taxonomic history. As recently as 2002, Walbaum’s named still existed in a formal sense and could have been used, but a petition to zoology’s governing body, the ICZN, has now rendered Perca tysonis  as a nomen oblitum.

It’s really a shame that the good Rev. Michael Tyson isn’t credited in some way for his impressive ichthyological efforts, as, aside from not naming his find, the accompanying description of the Percula Clownfish is extraordinarily well-done for this period. While he might be largely forgotten, the lovely illustration he’s left behind stands as an important contribution in the history of coral reef exploration. So take a moment and wish a happy birthday to Mike Tyson’s Clownfish (Amphiprion percula née Perca tysonis).