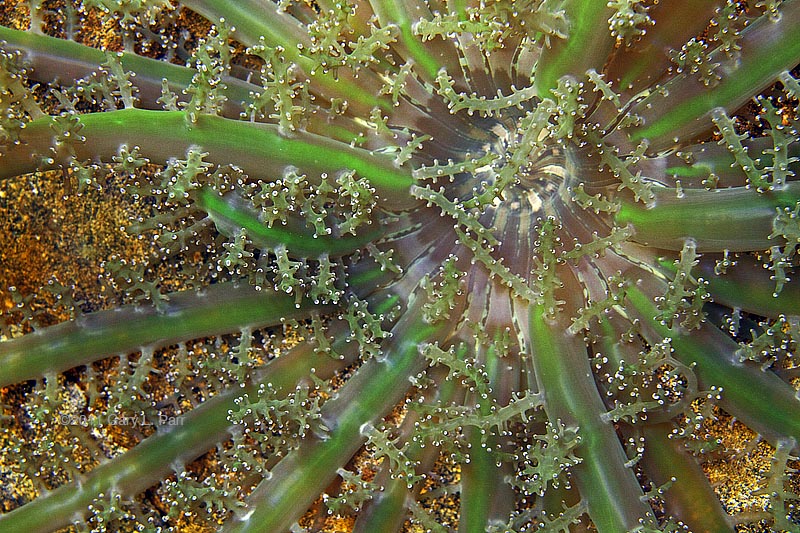 Last week, while on a business trip to San Francisco, I had the pleasure of visiting the Steinhart Aquarium at the California Academy of Sciences. It’s a terrific place and it should be at the top of your list should you find yourself in San Francisco. You’ll discover a tremendous variety of animals, many not seen elsewhere, thriving in top-notch environments. To learn more, listen to this week’s Reef Threads podcast, which features guests Rich Ross and Matt Wandell from the Steinhart Aquarium.
I could write much about the aquarium but this is a column about photography so I’ll tell you about how I captured this week’s image of Megalactis hemprichi. When I arrived at Steinhart, Matt Wandell was giving me a short tour and showed me a couple of anemones he and Rich had collected during a recent trip to the Philippines. Since they were anemones I hadn’t seen before, out came the camera. To photograph them properly, however, required a top-down shot, which meant we headed to the “back room.”
The top of the tank that contained these animals is about 8 in. below the framework that holds another tank. Fitting camera, lens, and angle-finder viewing device in that slot took a some maneuvering. Once the camera was in position, photographing the Actinostephanus haeckeli specimen (below) was relatively easy because it was in the back of the tank.
The challenge was the Megalactis hemprichi specimen because it was in the front right corner of the tank. In addition to the 8 in. gap between tanks, I had to deal with the wall that separates the public area and some plumbing. My initial reaction was that the shot wasn’t worth the trouble. But the challenge was there, so we took a run at it.
My travel tripod has a center column that can be positioned as a horizontal arm. For these photos, that horizontal arm was an essential feature. After considerable manipulation, I was able to weave the tripod legs between pipes, tank, and wall and hang the camera, with my 50-mm macro lens, over the water. It was then that I realized I had no way of seeing what I was shooting. The pipes and tripod legs wouldn’t let me get close enough.
The anemone is relatively flat, so I knew an f/11 aperture would give me sufficient depth of field. But I needed a shutter speed. With Matt blocking the light glare with his clipboard, I was able to peer into my angle finder from a distance and see the exposure meter. It said 1/5 sec. Given the lighting conditions, I was confident that was an accurate reading.
The real problem was that I couldn’t get close enough to the eyepiece to see how the anemone was positioned in the frame. I also couldn’t tell if the lens was focused. I don’t like using autofocus for this type of photography because it usually doesn’t work. But it was clearly the only way I was going to have a chance of getting a photo.
So I took a guess as to the best camera position for an acceptable composition, turned on the autofocus, and waited for the focus to lock and the camera and water surface to stop moving. I couldn’t tell whether the lens was focused on the anemone or something else, so I just had to trust the technology.
I always use mirror lockup to minimize vibration. In this case it was essential because the whole setup was not very stable and I was very concerned about the tripod leaning over and dipping the lens in saltwater. With mirror lockup, the first push of the remote shutter button lifts the mirror. Then you wait a second or two for that vibration to dissipate before tripping the shutter. After I lifted the mirror I could see the camera moving so I waited longer than normal for things to settle before tripping the shutter. I took three shots, one with a one-stop-slower shutter speed, to give me the best chance of obtaining a good image.
I pulled the camera out and reviewed the images. They looked to be in focus and properly exposed. The surprise was that I was absolutely lucky and had positioned the camera perfectly with the center of the anemone right where I wanted it in the frame (the image did not require any cropping). Things looked good and the camera gear didn’t get any saltwater on it, so I didn’t risk another series of shots and moved on to more conventional aquarium photography.
When I got back to the hotel, the Megalactis images were the first I processed. I celebrated briefly when it was clear that the effort had paid off.
Technical details: 1/5 sec. at f/11, ISO 400, Canon 7D, Sigma EX 50-mm macro, tripod, remote release, mirror lockup.–Gary L. Parr, www.gparr.com, www.reefthreads.com 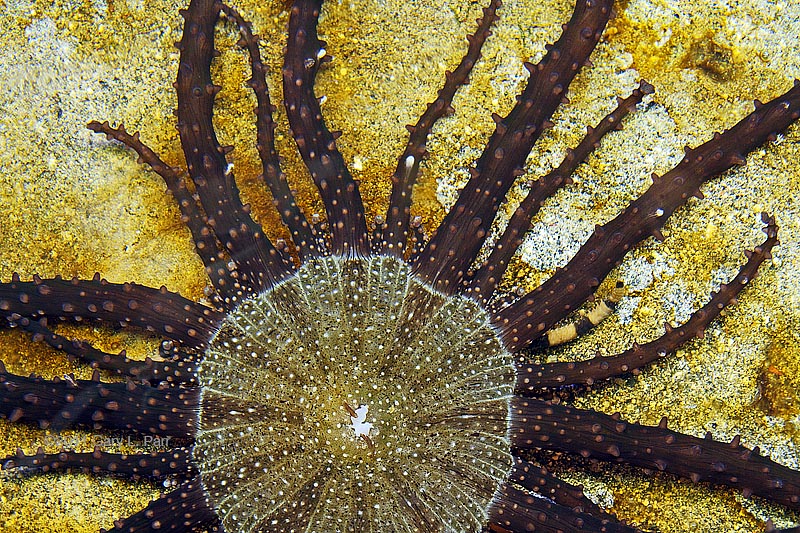