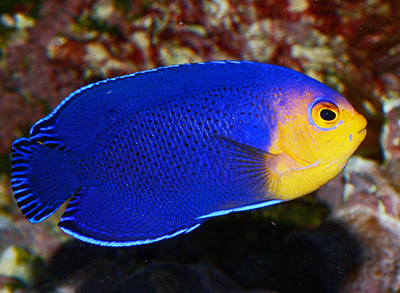 Having very recently departed the state of Ohio and resettled his family down in the Florida Keys, Caribbean Chris has had to part with his beloved, long-established Caribbean-biotope tank. He’s also had to come to terms with the reality that the specimens he bequeathed to me are now gracelessly intermingled with my Indo-Pacific species. So, to give CC a little inspiration (or torment his soul, either way), I thought I’d dedicate today’s post to a fish species that might be a welcome addition to his new tank whenever he gets around to setting it up—the Atlantic pygmy angelfish, aka the cherub angelfish (Centropyge argi).

A denizen of the tropical western Atlantic and Caribbean Sea, this dwarf angel is a visual gem and can be a good choice for smaller systems. It is, however, rather feisty for its size, and this trait must be factored in when choosing tankmates, contemplating order of introduction, etc.

C. argi is blue overall with varying (by individual) degrees of orange-yellow coloration on its face and throat. The eyes are ringed with blue, and most of the fins (with the exception of the pectorals, which are yellow) are very dark blue, almost blackish, with lighter blue margins. Typical of marine angels, this species also has sharp, backward-curving spines on its gill covers (which are prone to getting tangled in nets). MORE