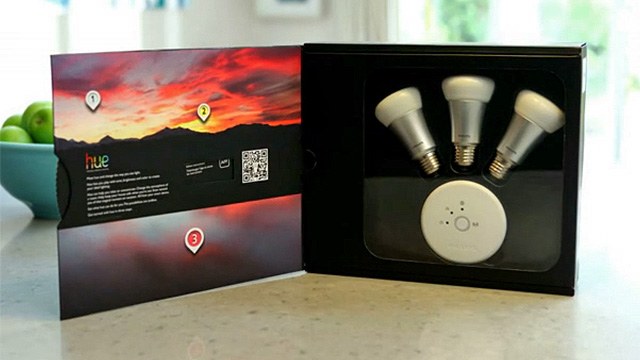 
The Philips Hue is a 8.5 watt light bulb that contains 11 colored LEDs housed in a compact enclosure that also includes a wireless transmitter.  Users can remotely control and customize the color of their bulb from web-enabled devices such as iPhones, Android phones, and web browsers.  Does this concept sound familiar?  Ecotech Marine‘s upcoming EcoSmart Live control platform (for their color-adjustable Radion LED) operates on a similar principle.  However, unlike the Radion, the Hue does not require an USB connection to a computer with internet access. Users simply screw in Hue bulbs into E26 incandescent sockets and set up the supplied wireless gateway to control multiple bulbs over the internet.

Starting October 30, 2012, Philips will market the Hue in a $200 retail package that includes three LED bulbs and one wireless gateway (as shown in the photo above);  The gateway can control up to 50 bulbs, and each additional bulb is sold for $60.  Aquarists can theoretically build a multi-bulb array of Hues to illuminate larger aquariums.  However, at $60 per bulb, this path is not cost effective compared to aquarium LED systems nor does the Hue have an aquarium-specific control interface.  Still, the Hue presents an interesting choice for nano aquariums and could make an interesting “accent lighting” option for larger aquariums.

Speaking of control interfaces: While the Hue’s control application is no where near as advanced as those designed for aquarium lighting, it does have one interesting feature worth mentioning.  Users can select an area of a photo to replicate a color.  This feature has interesting potential if adopted for aquarium use.  For example, if a you want to replicate the combined spectrum of an aquarium which uses a mixture of metal halides, fluorescents, and/or LEDs, you could in theory take a photo of the aquarium light shone on a reference card (provided his photo device is calibrated to a specific white balance) and let the software figure out the color for you.