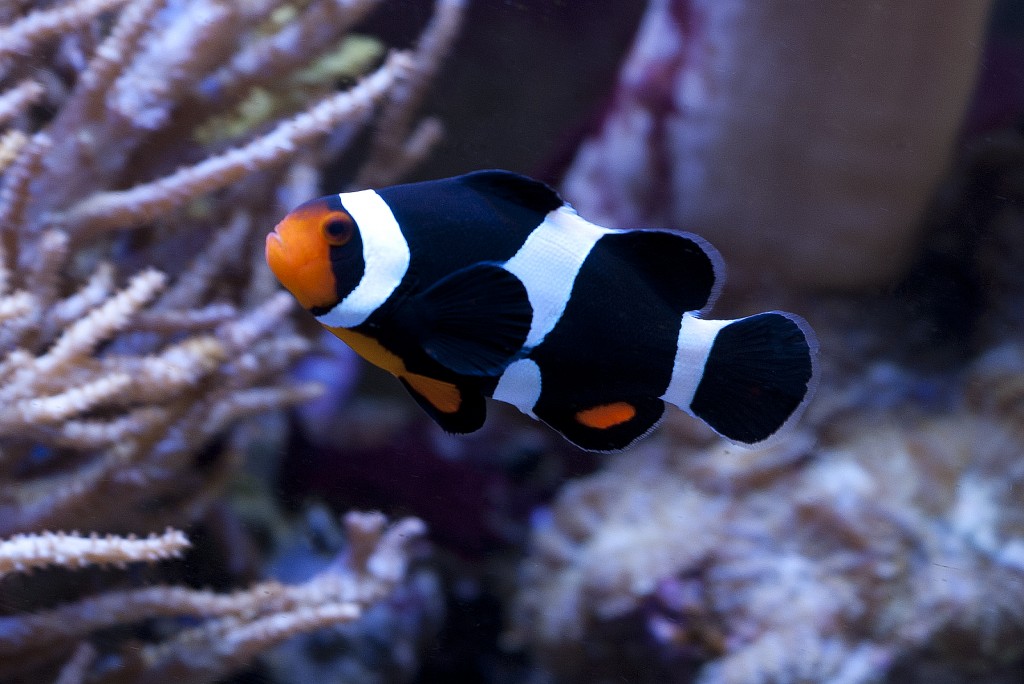 Several years ago I picked up an “Odd Couple” of clownfish in Colorado and shipped them home. A pair of Onyx Percula and a Black Ocellaris clownfish that had been together for a while. This pair surprisingly spawned, and resulted in a hybrid that I named the Black Photon Clownfish. There was always the inevitable question – “Are these hybrids fertile and can they produce offspring?”  I paired up some of the Black Photon clownfish siblings to see if they would eventually pair up and spawn. When the original male died shortly after I had raised a few spawns, I tried pairing the female with other black ocellaris hoping to recreate the black photons. After several unsuccessful attempts where the female ended up killing the males, I threw a few of her black photon progeny juveniles in with her to serve as detractors while I tried to add another black ocellaris male. She had her own plans, and decided to kill the others and cozy up to a black photon clownfish. Out of sheer curiosity I left the pair together. As the juvenile male matured, I started to see them go through the courting and mating ritual and gave me hope that they might spawn someday. Yes they did !! This answered the one nagging question about the fertility of the hybrid clownfish. These offspring were named Half Black Photons, and are currently available through LiveAquaria.com. These have been much slower in developing the black colors but as they age the black colors are developing very nicely. More recently, I separated the pair and paired the black photon male with a black ocellaris female that had lost its mate. I also wanted to recreate the original black photon line of clownfish so I tried paring the original Onyx Percula the mother of the Black Photon and Half Black Photons with another black ocellaris. After several unsuccessful attempts, and through the miracle of an accident (see my blog post about the Midnight Photons), I now have a spawning pair of the Mother of all Photons with a ORA Midnight ocellaris, hopefully to result in successful rearing of the Midnight Photons.  Additionally I have a pair of Black Photons that have not yet spawned for me. There have been reports from others who purchased the Black Photons that these fish have spawned.  The chart below shows the genetics of the various Photon clownfish.  Interesting all are direct progeny from the promiscuous female Onyx percula. 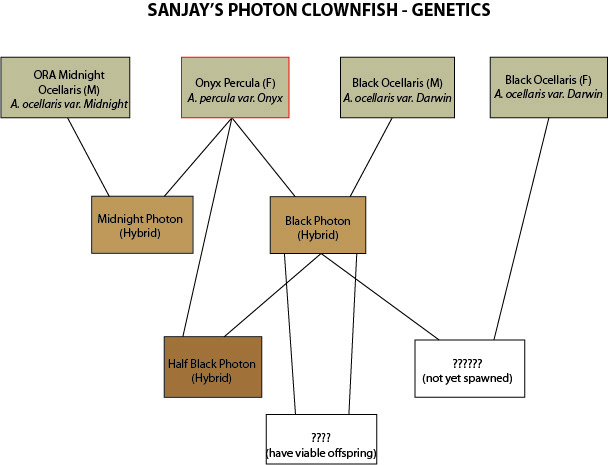