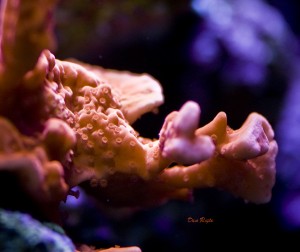 This Montipora setosa has developed yellow green pigments believed to have been grafted from a neighboring coral.The branches of an Acropora valida were allowed to come into contact with this Montipora setosa creating a portion of differently colored growth.  The growth continued to manifest into part of the colony and seed fragments from the colored portions have yielded a newly colored coral.  It is theorized that pigment shifts such as these are a result of protein infections as well as pigment grafting but given the circumstances surrounding this colony, I believe it is truly grafted from the Acropora allowed to touch it.