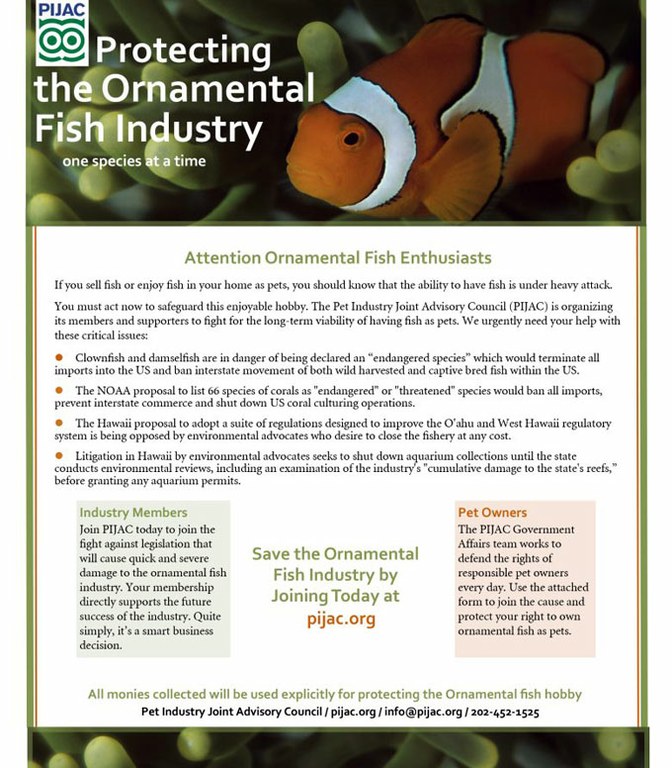 PIJAC is a Washington DC nonprofit advocacy group whose stated mission is to “promote responsible pet ownership and animal welfare, foster environmental stewardship, and ensure the availability of pets.”  PIJAC is reaching out to the aquarium industry and enthusiasts for financial support in its fight against looming anti-aquarium legislation, including:

Advanced Aquarist does not officially endorse PIJAC but we encourage aquarists to learn more about their organization to see if it is cause you would like to support.

Advanced Aquarist understands a balance between industry and conservation is difficult to strike but believes the two are not mutually exclusive nor must they necessarily be at odds with one another.  Advanced Aquarist appeals to lawmakers to make their decisions based on scientific data, not public emotional appeals; Conservation and resource management are, after all, scientific issues.

While much work remains, the marine ornamental trade has made great strides in responsible and sustainable trade and husbandry. The marine aquarium hobby has adopted cooperative models with many Pacific coastal communities, encouraging stewardship of their natural resources by providing much needed economic incentives for conservation.  Our hobby is responsible for many captive breeding advancements of both corals and marine fish, with research initiatives (supported by the aquarium industry) such as the Rising Tide Conservation learning to breed an increasing number of reef fish species for the first time in history.  Conservation organizations like the Coral Reef Foundation have credited aquarists for the propagation techniques they use to restore Atlantic reefs with staghorn corals.  And aquariums, both public and private, have taught multiple generations to appreciate sea life.

Aquarists are under no illusion that our hobby has zero effect on coral reefs.  But to demonize aquarists as unconscionable pillagers of nature is not only unfair but the furthest thing from the truth.  We ask for less demagoguery and more dialogue.  Let’s analyze the data and allow the facts to guide our decisions.