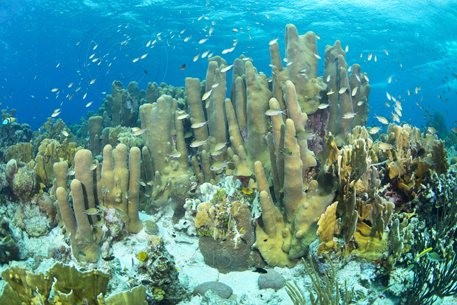 Good morning readers, today I have an insane colony of Pillar Corals for your viewing pleasure that I shot on yesterday’s dive. Not sure if you can tell from the small photo, but there are fish everywhere, this is what a healthy coral reef should look like, all I can say is “Wowzers”! Pillar coral forms an encrusted base from which grow vertical cylindrical, round-ended columns.This coral can grow to a height of 3 m (10 ft) with pillars more than 10 cm (4 in) wide but is usually much smaller than this. The corallites from which the polyps protrude are smaller than 1 cm (0.4 in) in diameter and arranged in shallow meandering valleys with low ridges in between.

Pillar coral is a zooxanthellate species, with symbiotic dinoflagellate algae living within the tissues. In sunlight these undergo photosynthesis and most of the organic compounds they produce are transferred to their host, while they make use of the coral’s nitrogenous wastes. These algae give the coral its brownish color and restrict it to living in shallow water into which the sunlight can penetrate.

Pillar coral is a slow-growing, long-lived species. A number of columns grow up from a basal plate; if the whole colony is dislodged and topples over, new cylindrical pillars can grow vertically from the fallen coral. Some specimens have been found where this has happened more than once, and the history of the colony can be deduced from its shape.MORE