How pink and purple hues act as sunscreens for corals 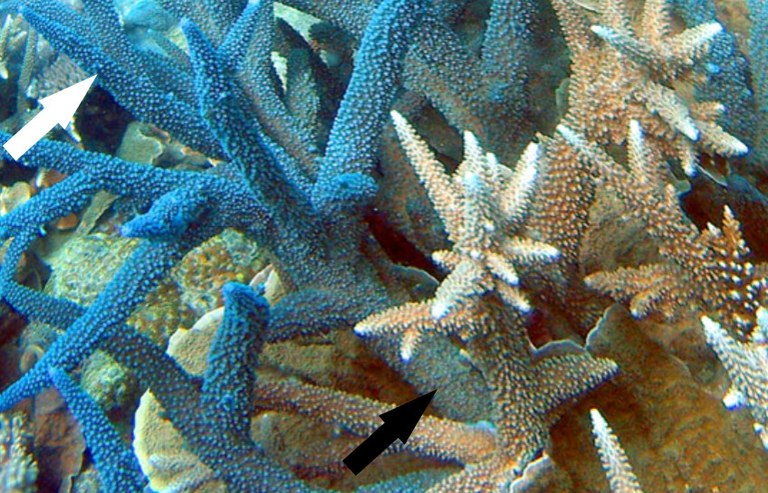 
Working in the Great Barrier Reef and under tightly controlled conditions in the Coral Reef Laboratory of the University of Southampton, the team of researchers produced experimental evidence that the pink and purple chromoproteins can act as sunscreens for the symbiotic algae by removing parts of the light that might become otherwise harmful.

Dr Jörg Wiedenmann, Senior Lecturer of Biological Oceanography and Head of the University’s Coral Reef Laboratory, who led the study says: “The beautiful pink and purple hues that are produced by the coral host are often evoked by chromoproteins; pigments that are biochemically related to the green fluorescent protein (GFP) of the jellyfish Aequorea victoria. In contrast to their green glowing counterpart, the chromoproteins take up substantial amounts of light, but they don’t re-emit light.

“GFP-like proteins were suggested to contribute to the protection of corals and their symbionts from excess sunlight. This hypothesis has been controversially discussed as the mechanism as to how these pigments function remained unclear. At least for the chromoproteins we know now that they have indeed the capacity to fulfill this function.”

The researchers also proposed an explanation for the mysterious phenomenon that some corals accumulate exceptionally high amounts of chromoproteins in growing areas, such as branch tips or in the region of healing wounds.

Dr Wiedenmann, who is based at the National Oceanography Centre, Southampton, explains: “These growing areas contain essentially no symbiotic algae, so much of the light is reflected by the white coral skeleton instead of being used by the algae. The resulting increased light intensities in the new parts of the coral represent a potential danger for the algal cells that need to colonise these areas. Hence, it seems that the corals use a clever trick to help their symbionts. The higher light intensity switches on the genes that are responsible for the production of the sunscreening chromoproteins.

“Our results suggest that the screening effect of the chromoproteins could help the algae to enter the new tissue. Once the symbiont population is fully established, the light levels in the tissue decrease as the algae use most of the light for photosynthesis. As a consequence, the genes of the chromoproteins are switched off again which allows the coral to save the energy required for their production.”

The research contributes to a better understanding of the coral’s response to environmental stress. Knowledge of the stress resilience of corals is an important requirement to help predictions of the fate of coral reefs that are exposed to climate change and various forms of anthropogenic disturbance.

The paper is published in the latest edition of the journal Coral Reefs.