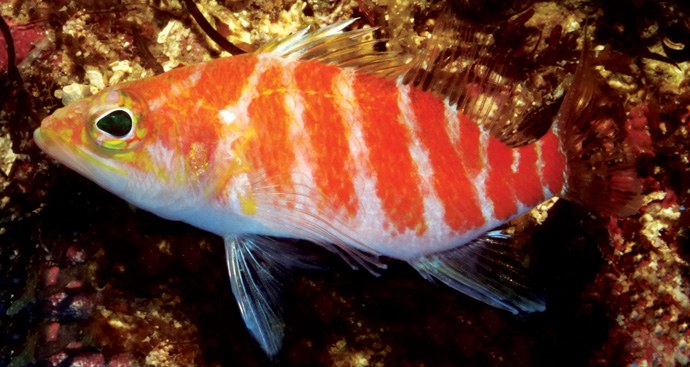 The new species is currently known only from the Coral Sea at Holmes Reefs. The holotype was collected from the ceiling of a cave at a depth of 63 meters (200+ feet).  It’s little wonder this species was only recently discovered.

As for the different pigmentation seen in the two photos, says the published paper, “A live specimen, approximately the same size as the holotype, was sold to the Japanese aquarium trade by Cairns Marine (Queensland, Australia); it exhibited a relatively rapid (about 10 minutes) color change, losing theirregular cross stripes, resulting in more or less uninterrupted white interspaces between the reddish band.”

Plectranthias bennetti is described by Gerald R Allen and Felton Walsh in the latest publication of the Journal of the Ocean Science Foundation.