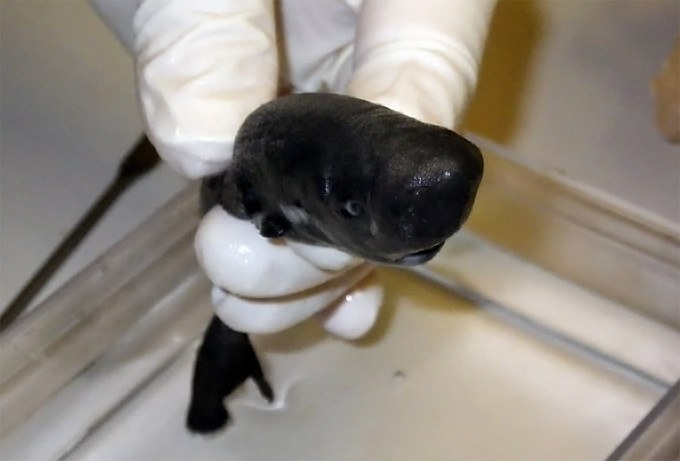 
The first pocket shark was discovered off the coast of Peru in 1979.  This was the first and only sighting of the  elusive shark …  that is, until this month.  NOAA researchers stumbled upon a preserved specimen stored at NOAA’s lab in Pascagoula, Mississippi.  It turns out that in 2010, NOAA researchers studying sperm whales (which dive to great depth presumably to hunt giant squids) accidentally caught the second pocket shark ever seen by man.  Coincidentally, don’t you think the pocket shark looks awfully like a miniaturized sperm whale?

Scientists know almost nothing about this species other than they live in very deep subtropical waters.  While no one would fault you if you thought pocket sharks were named for their pocket-sized stature (adult pocket sharks are only about 15 inches long as far as we currently know, and the recently uncovered specimen is only a 5.5 inch juvenile male), pocket sharks are actually named for two mysterious tiny pockets located directly behind each of their pectoral fins.  What these pockets are for is anyone’s guess.