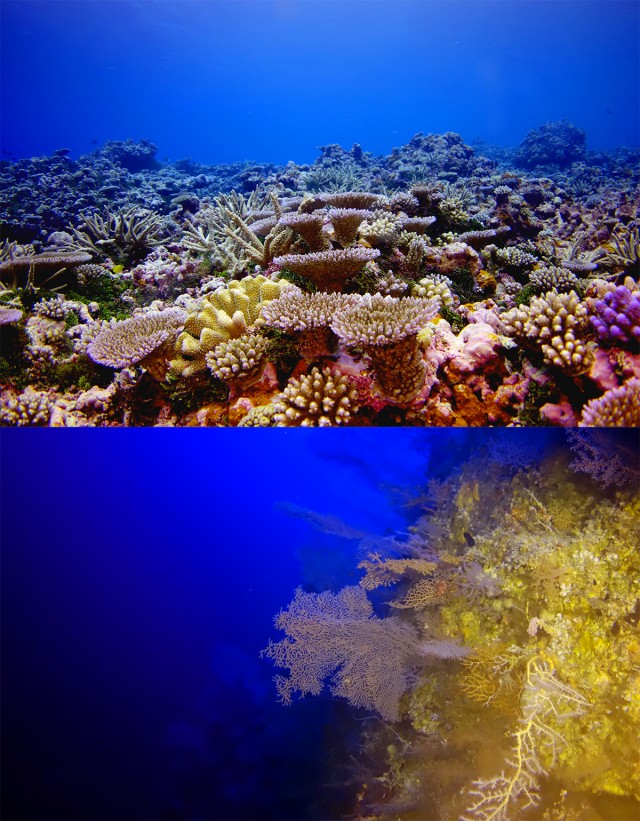 Check out this new video from Brian Greene – a glimpse into what an extremely deep diving trip looks like. You’ll notice that the divers’ voices sound funny; that’s because they are breathing a mixture of oxygen and helium. The main reason for adding helium to the breathing mix is to reduce the proportions of nitrogen and oxygen below those of air, to allow the gas mix to be breathed safely on deep dives. A lower proportion of nitrogen is required to reduce nitrogen narcosis and other physiological effects of the gas at depth. And the crunching sound isn’t the scientists stepping on the reef – it’s actually the  desiccant packs in the camera housing.

Brian Greene, Dr. Richard Pyle, and Dr. Sonia Rowley are on this dive, part of the Association for Marine Exploration‘s expedition to Pohnpei, Ant Atoll, and Pakin Atoll. As Dr. Rowley posted on the site, “After our remarkably successful 2014 research expedition to Pohnpei and Ant Atoll, it was clear that we simply had to return…”

I asked Brian about the clove oil being used in the video.  He told me, “The clove oil is the same that you can buy at any health food store. We mix it with pure ethanol. It slows the fish down for a few minutes and can flush certain species out of hiding. Rich was using it to collect a Belonaperca pylei.”

Such fascinating work; I look forward to seeing what else comes out of this expedition. Check out Brian’s facebook page for more videos, and check back here for more updates!