During the last week, a group of researchers from the University of Hawaii has been exploring the depths of Pohnpei in the Central Pacific for new and exotic marine life. Using rebreather diving equipment, these intrepid scientists descended to a remarkable 490 feet. And, like most dives to this habitat, numerous new species appear to have been found.

The video above shows a couple of spectacular new anthias. A small group of purple and yellow Grammatonotus can be seen at the beginning of the clip. These are females, and the male appears for just a brief moment (at 0:17) before ducking into a crevice. Look closely to see the medial magenta stripe, a yellow dorsal fin, and a yellow caudal fin with lavender lobes. 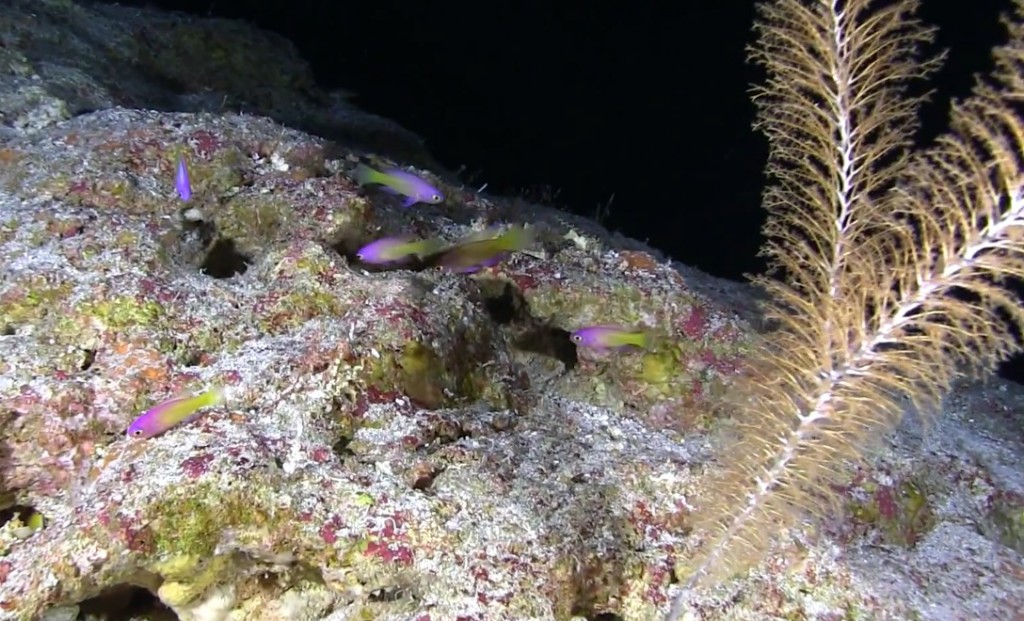 An undescribed Grammatonotus from 490ft, Pohnpei

Grammatonotus, despite looking very anthias-like, is classified in a separate family, Callanthiidae. This small genus is typically found well below recreational diving depth, with only a precious few photos showing this fish alive in its natural habitat. There is, however, a single record of a juvenile having been collected in just 7 meters at Hawaii, so maybe someday one will find its way into a reef tank.

The landscape in this video is obviously far-removed from the stereotypical tropical reef. The only corals to be seen are a variety of octocorals and antipatharians. The rocks teem with a kaleidoscope of sponges and rhodophytes. At one point, a large crustacean ducks into its burrow, though its impossible to decipher what this creature is.

Near the end is a fantastic close-up of another potential new species. This is an Odontanthias of some sort. The short caudal fin lobes and the pennant-like dorsal fin spine are most similar to O. flagris from the Ryukyu Islands of Japan, but differences in color and biogeography suggest this fish is distinct. There is also a brief glimmer of a Chromis circumaurea. The name translates to “encircled in gold”, and it clearly fits. 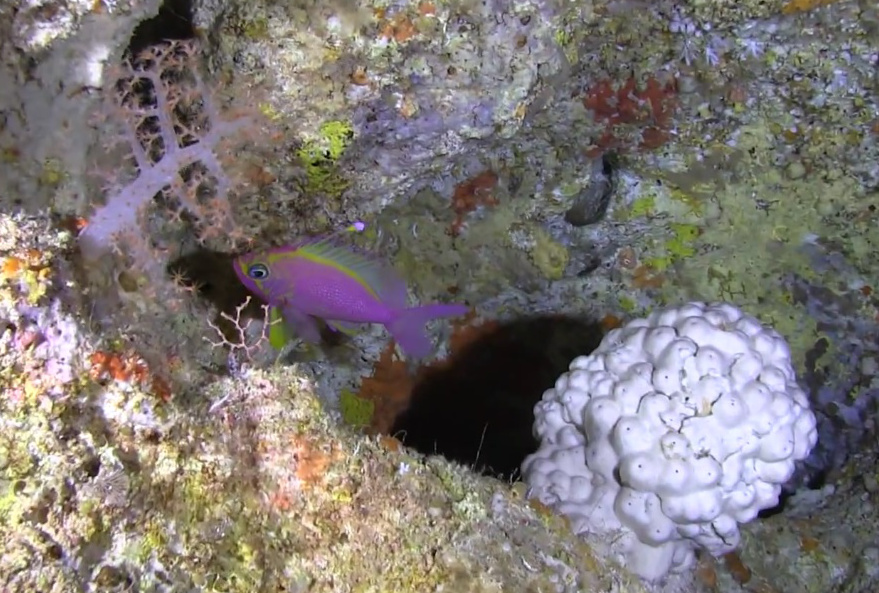 In addition to these finds, there are additional videos showing a potentially new species of the deepwater anthias genus Tosanoides, as well as another new Odontanthias species (similar to O. katayamai)  which has a yellow caudal fin and lacks the elongate dorsal fin spine.

Who knows how many more species remain to be discovered in these deep reefs. While I have focused only on the pretty fishes here, how many of the sponges and algae in this video are likely to be new to science? And what of the fauna we can’t see… the microscopic crustaceans and the meiofaunal worms? In mesophotic reefs, the immensity of our ignorance is beyond estimation.