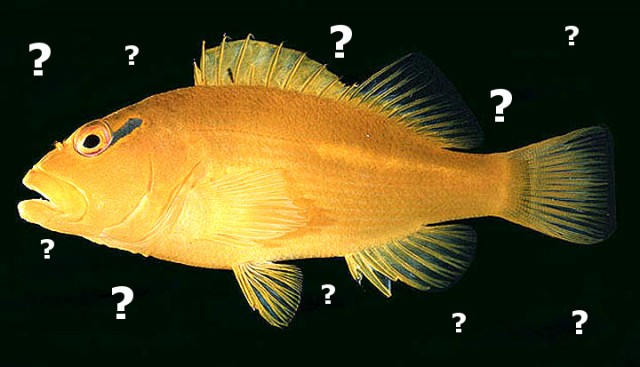 The Yellow Hawkfish Paracirrhites xanthus is one of the most seldom seen species in the aquarium industry. For collectors of rare livestock, this fish is a cirrhitid holy grail, boasting a desirable combination of bright colors and near unobtainability. Described more than a half-century ago, there are many lingering questions concerning this fish, as well as a pair of nearly identical species found alongside it. Thanks in large part to some exciting discoveries documented for the first time by aquarists, we may finally be getting closer to understanding the evolutionary origins of these enigmatic fishes. 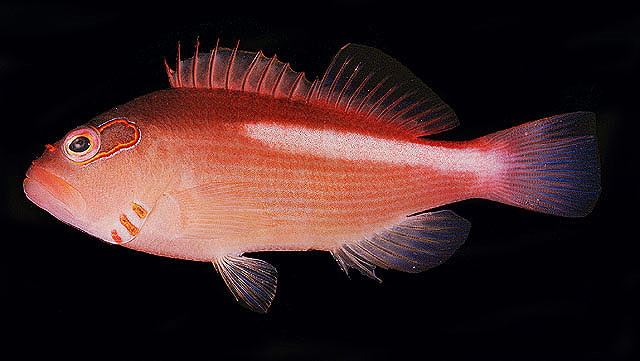 Before delving into things, we need to briefly make mention of the Yellow Hawkfish’s sister species: the Arc-eye Hawkfish Paracirrhites arcatus. This aquarium mainstay is one of the most ubiquitous and geographically wide-ranging members of the family, occurring from the East African coastline to Japan, Hawaii and throughout Polynesia. These two species bear a striking similarity to their overall shape and coloration but differ in a few key traits: 1) The arched patterning behind the eye is narrower in P. xanthus. 2) The interopercle is patterned with a series of short orange and white stripes in P. arcatus—these are entirely lacking in P. xanthus. 3) The modal lateral line scale count appears greater in P. xanthus (47-48 vs 50). 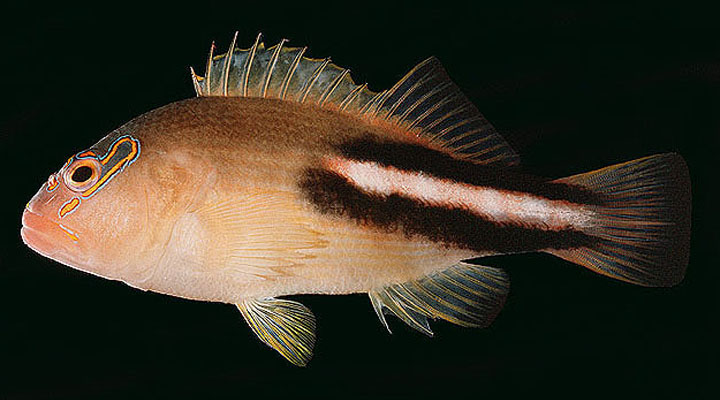 Paracirrhites xanthus was first described from Polynesian specimens by the inimitable John Randall in his 1963 revision of the family, alongside two other highly similar species collected from the same location: P. nisus and P. bicolor. While essentially all three are morphologically indistinguishable, there are major color differences that tell them apart—P. nisus possesses a posterior white stripe flanked by similar black markings, while P. bicolor is a predominantly dark fish with a light caudal and anal fin. Aside from the usual perfunctory discussion of color and morphology for these fishes, Randall (who was working with just a handful of specimens) made no mention to the apparent biogeographical mystery he happened upon. Why are there three fishes, so similar in appearance, found together in such a small corner of the globe when other hawkfishes are generally quite widespread and rarely overlap with their closest relatives? 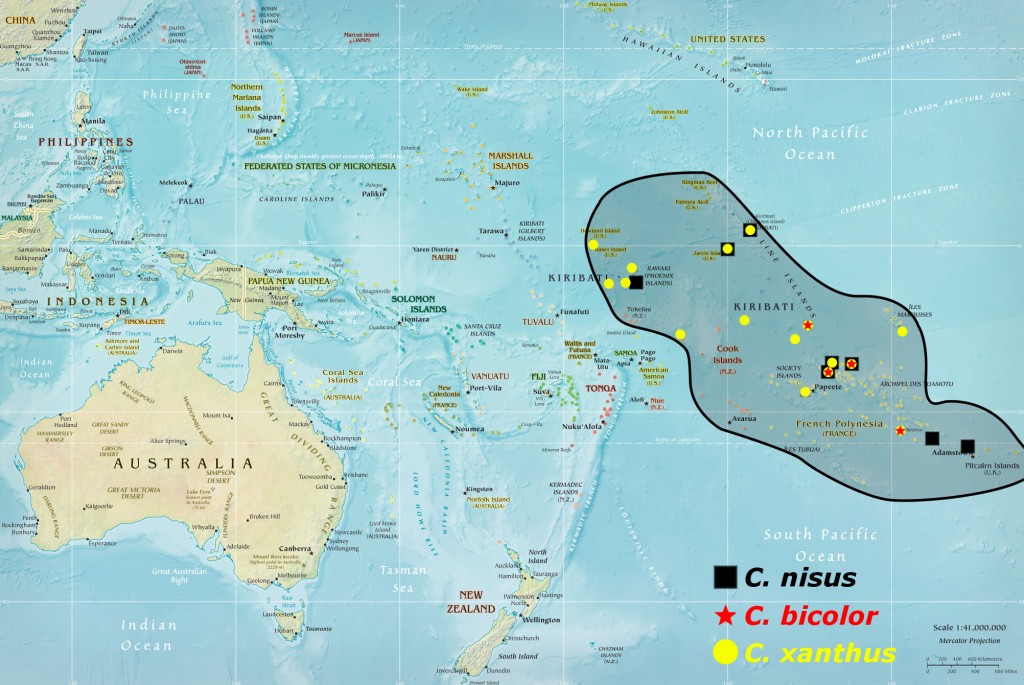 Known records of the P. xanthus complex. Click to enlarge.

The map shown above provides an inventory of every reliably documented specimen I could find from the relevant scientific literature, databases, aquarium suppliers and photographic repositories. Many of these localities are previously undocumented, but the overall trend is that all three taxa are restricted to Southern Polynesia and exhibit fully overlapping ranges (and recall that P. arcatus is likewise found throughout this region). However, these three fishes are not equal in their abundance, as P. xanthus is reported as being “moderately common”, while P. nisus is listed as “occasional” (with P. bicolor seemingly rarer still).

The plot thickens when we consider the small number of aquarium specimens which have trickled into the hands of hobbyists in recent years. Rather than keeping their distinctive colorations, these captive individuals have shown an interesting pattern of color reversal. There are documented cases where a bright yellow fish of the “xanthus” phenotype has over time faded in coloration and developed the characteristic posterior stripes of the “nisus” phenotype. Conversely, specimens procured by aquarium wholesaler Pacific East Aquaculture have shown just the opposite reaction, with nisus-like specimens quickly developing a xanthus-like appearance. In this instance, the color change happened when two specimens of the “nisus” phenotype were placed in close proximity, resulting in one turning yellow and one retaining its original striped patterning.

This specimen changed from a nisus phenotype to a xanthus phenotype. Credit: Pacific east Aquaculture

It’s hard to know what to make of all this, other than the obvious conclusion that the two color variations are almost certainly of a single species. Randall makes mention of individuals of both sexes found for each phenotype, which argues against this being a simple case of sexual dichromatism. This is all the more confusing when we consider that the sister species P. arcatus lacks a xanthic variation entirely. More specimens and observations are needed (particularly of the rarely encountered “nisus” phenotype) before we can hope to begin teasing apart this conundrum. 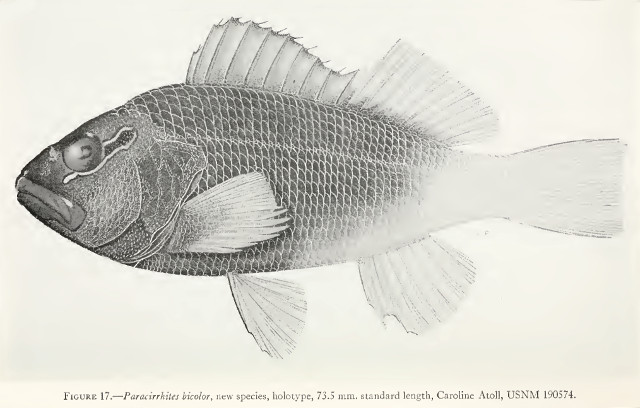 There are apparently no photographs showing P. bicolor in life. Credit: Randall 1963

Adding to this taxonomic chaos is the obscure P. bicolor, which was originally described from just a pair of individuals and has only observed a few times since. To understand this beast, we need to again return to P. arcatus. While it may not have a xanthic color phase, it does show considerable variation in its base color and pattern. The most commonly seen variation is a light pinkish-red, with a prominent white stripe along the side, but there is also a more rarely encountered dark phase which lacks the stripe entirely. Randall confirmed that there are no morphological differences between the two and justifiably considered them as representing a single heterogenous species. When we return to P. bicolor, we can see an obvious similarity to the dark phase of P. arcatus, as both phenotypes are more or less identical in being dark with a lightly colored caudal fin—the apparent rarity of P. bicolor is precisely what we would expect for a dark phase of P. xanthus.

Compare the similarities in these dark morphs of P. arcatus (from Hawaii & Mauritius) to P. bicolor. Credit: Kara McCain & Mauritius100

Piecing together all the evidence we’ve discussed thus far, there is one obvious conclusion to be drawn: P. xanthus, P. nisus and P. bicolor are representative phenotypes of a single variable species restricted to Polynesia. Much work remains before we can hope to understand why this fish is so mutable in appearance, and genetic study is needed to determine whether any of these forms might represent a hybrid with the widespread and sympatric P. arcatus. It bears mention that the distinctive markings behind the eye are somewhat variable across specimens and may hint at the kind of genetic recombination we would expect from a hybrid origin. 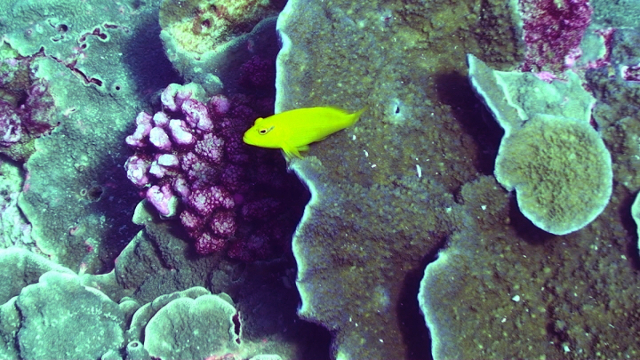 There is nothing subtle about P. xanthus when seen in the wild. From Flint Island, Kiribati. Credit: John L. Earle

The alternate hypothesis—that there are three nearly indistinguishable species of rare hawkfish restricted to Polynesia—is simply untenable in light of the observations coming from aquarists. Since all of these taxa were described in the same paper, should it be determined that these three truly do represent just a single “species”, any of these names could potentially be used for this fish. Though probably the most appropriate choice is P. xanthus, seeing as this is the most abundant of the three phenotypes and, with its bright yellow color, the most readily identifiable of the bunch.