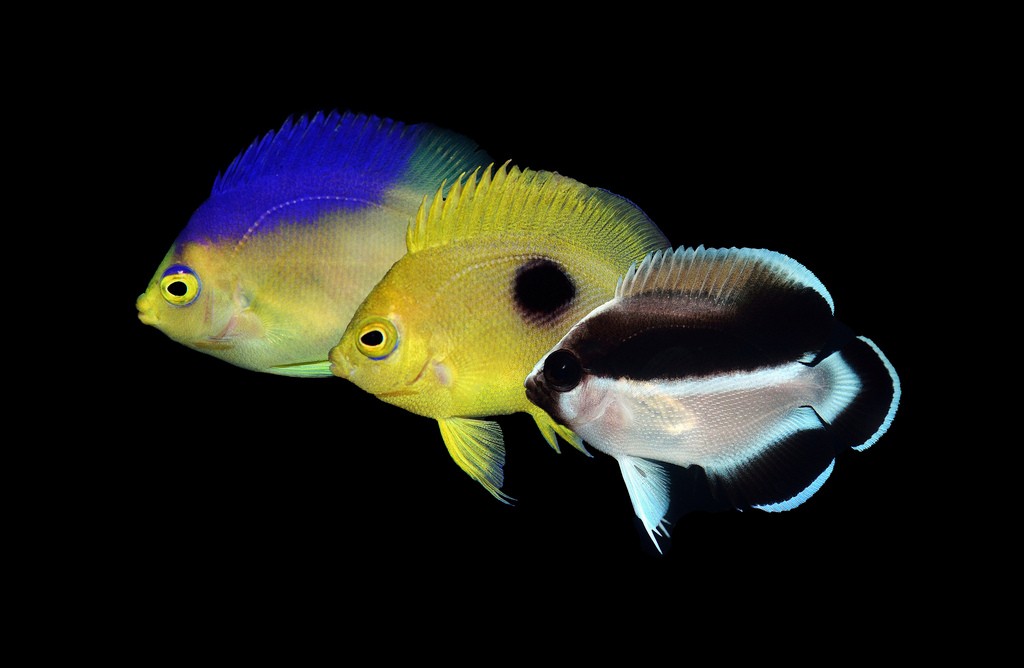 These three angelfishes form an unexpected clade within the phylogeny of Pomacanthidae. Note the placement of narcosis’ spot versus arcuatus’ stripe and colini’s back. Photo credit: Lemon TYK.

In gross review of the vast piscine fauna distributed around the globe, there are perhaps few families of fish that can rival the unparalleled beauty and elegance that comes with the marine angelfishes of the family Pomacanthidae. Their painterly brilliance, comical personalities and intelligent nature have secured their iconic position amongst a buzzing plethora of reef denizens in which they share their aquatic home with. Needless to say, their captivating and inviting qualities have piqued the interest of naturalists and aquarists alike, seeking to appreciate their beauty both in the field, as well as in the home aquaria.

But, while angelfish in general are fabulously well known and studied (you’ll be hard pressed to find a new species these days!), their systematic classifications have mostly been in disarray. In the grand scheme of bony fish evolution, we know that angelfishes are a relatively recent arrival, having separated from a common ancestor with the butterflyfishes (Chaetodontidae) around 52 million years ago (MYA). During this time, the larger angelfish species were the first to diverge, forming what we now know today as Holacanthus, Pomacanthus and Chaetodontplus. The dwarf angelfishes only diverged much later, sharing a common ancestor with Pygoplites around 30-33 MYA. While Pygoplites superficially resemble very little to the modern day dwarf angelfish, its predilection for crypsis and a generally cloistered lifestyle hints at a slight likeness to those of Centropyge. Recent molecular studies have elucidated the long awaited phylogeny of angelfishes, in particular, shedding light on the more taxonomically speciose Centropyge. 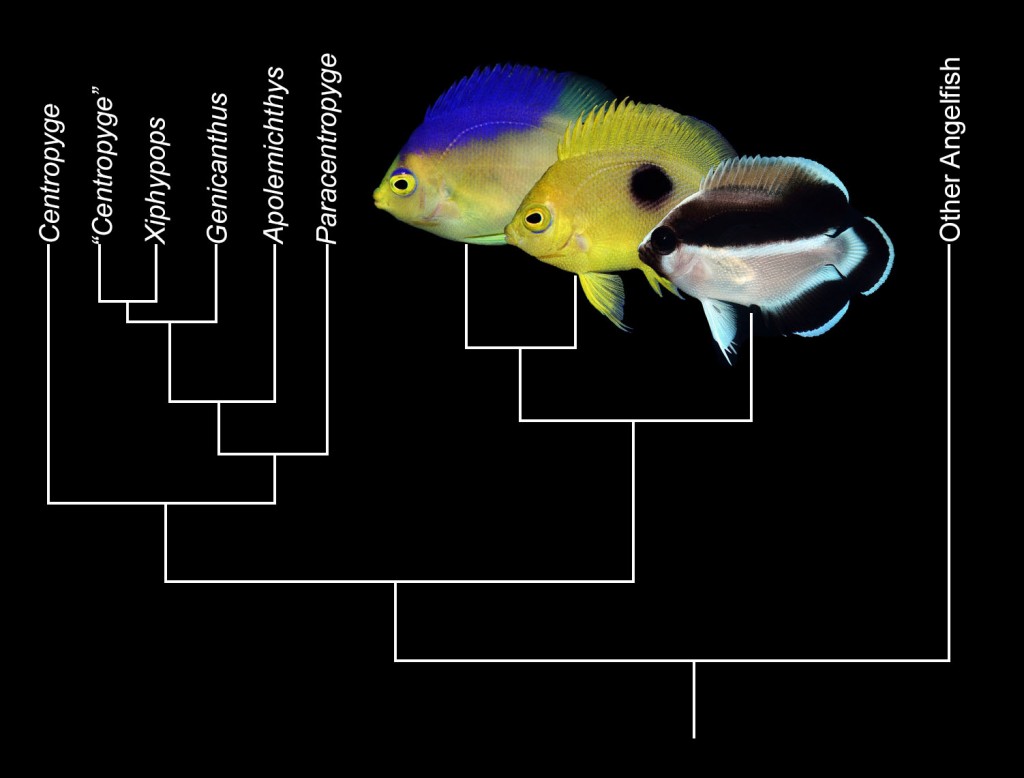 A partial phylogeny of modern day angelfishes, based on research conducted by Gaither et al., 2014. Note that Genicanthus and Apolemichthys are nestled within the paraphyletic Centropyge. Photo credit: Lemon TYK.

A recent phylogenetic study conducted by Gaither et al., reveals Centropyge to be paraphyletic. In addition, Genicanthus and Apolemichthys are found to be nestled deep within the dwarf angelfish tree, sharing a common ancestor with many of these “Centropyge” groups. More surprising, however, is the discovery of a sister clade comprising three unlikely species – one of which hardly comes to mind when pondering the intricacies of Centropyge. They are Centropyge colini, narcosis and Apolemichthys arcuatus. 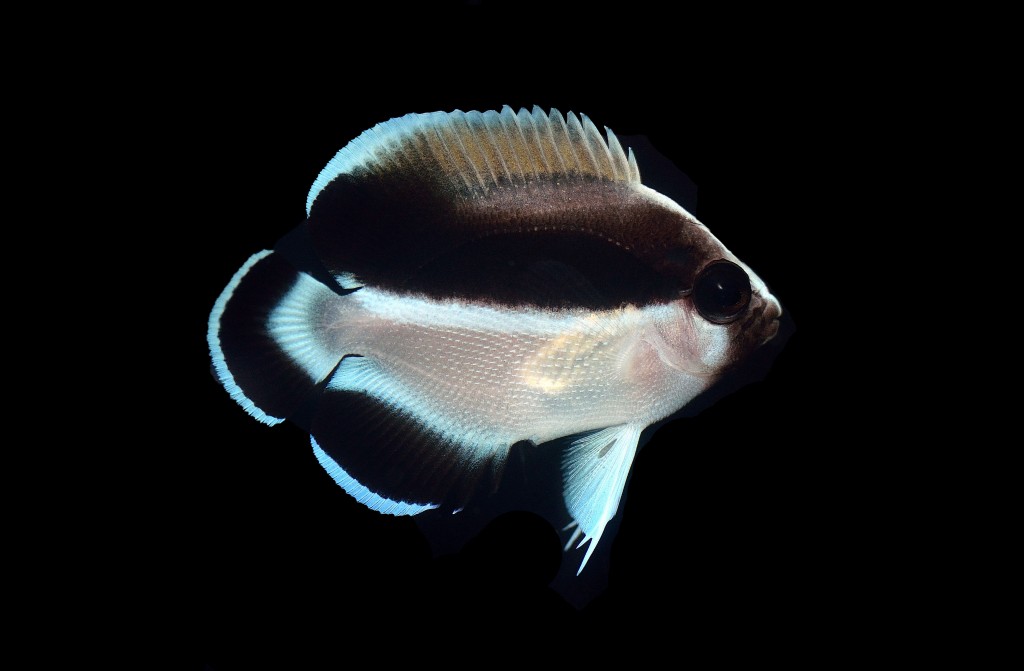 The taller body profile and dorsal fin spines are more clearly seen in the juveniles of A. arcuatus. Photo credit: Lemon TYK.

The three species are unique in having a proportionately deeper body profile with significantly heightened dorsal fin spines. Centropyge narcosis and colini, for example, are nearly disc shaped when viewed with their dorsal fins held up. These features are less obvious in the adults of A. arcuatus, but can be clearly seen in its juvenile form. The common topic in unison here is that all three species are fond of deep waters, with each of them easily capable of penetrating depths exceeding 100m in their respective habitats. 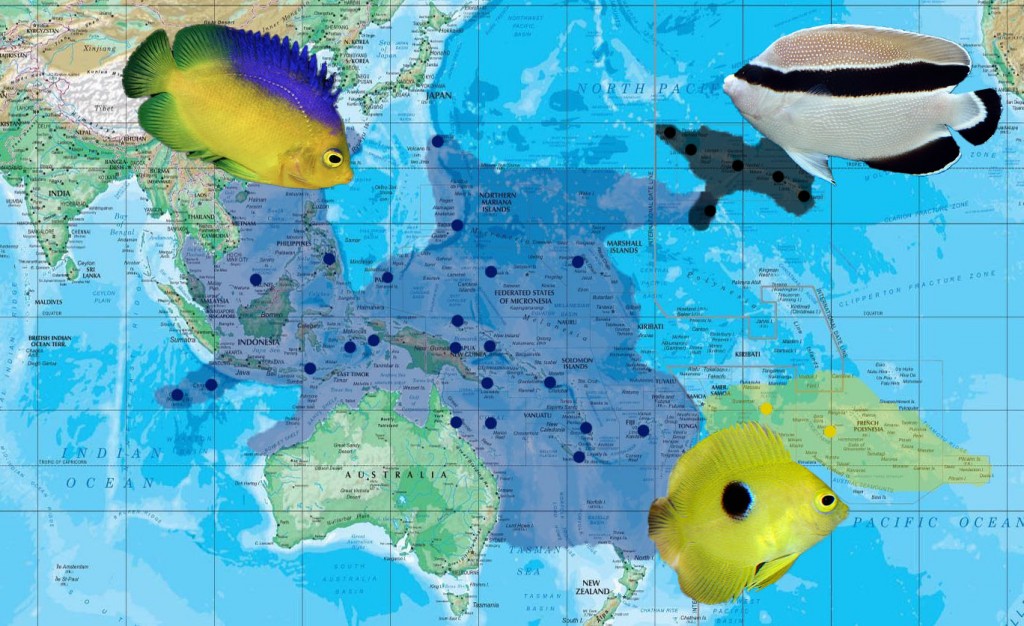 The biogeography of C. colini, C. narcosis and A. arcuatus. This clade represents a lineage of deepwater angelfish that occupy much of the Western, Central and Southern Pacific Ocean. Photo credit: Lemon TYK.

In examination of the biogeography pertaining to this clade, we see the colini and narcosis sisters exhibiting vicariant distributions, with the former attaining a substantial range across much of the Western Pacific, while the latter only sparsely in the Southern Pacific islands of Polynesia. A. arcuatus is practically confined to the Hawaiian archipelago. Together, they rein dominance across the Western, Central and Southern Pacific Ocean. Given their rarity and penchant for deep waters, it would seem likely that this clade represents an ancient, relic lineage of angelfish that underwent relatively little change throughout their evolutionary process.

The three occupy a basal placement in the dwarf angelfish phylogeny, indicating that not only did they diversify the least from a shared, common ancestor; they also did so a relatively long time ago (~18 MYA). Therefore, it might not be too contentious to think of these as relics, giving us a glimpse at what the ancestral angelfish may have assumed, both in appearance and habitual preference. 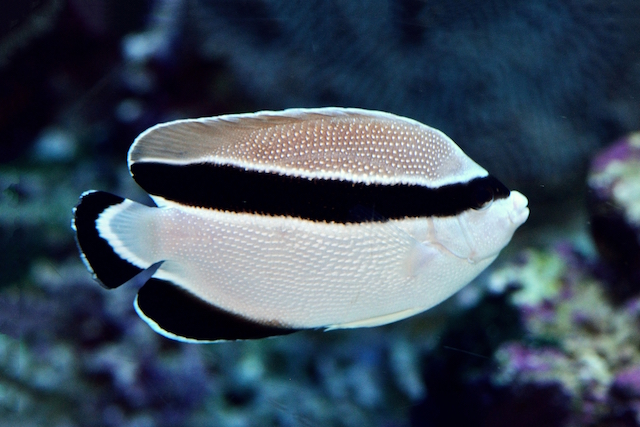 The recent phylogenetic study show support for the removal of A. arcuatus from Apolemichthys. Photo credit: Lemon TYK.

How then, does this information help apply to us aquarists on a more rudimentary level? The Bandit Angelfish is really the most taxonomically bizarre of the angelfishes, and its confounding nature is pardonable by any means. For years, it has been the subject of significant taxonomic discordance, bouncing repeatedly amongst the various angelfish genera. Originally described under Holacanthus, it was later moved to the monotypic Desmoholacanthus, (which means “bounded/linked to Holacanthus”, suggesting their closeness) before finding its current placement in Apolemichthys. This placement, however, has always been seen as the lesser of all evils, as the Bandit Angelfish clearly exhibits very little likeness to the genus.

The molecular results have confirmed its fickle taxonomic history, and it is perhaps due, under a formal revision, for a change once again. Perhaps the resurrection of Desmoholacanthus is in order. 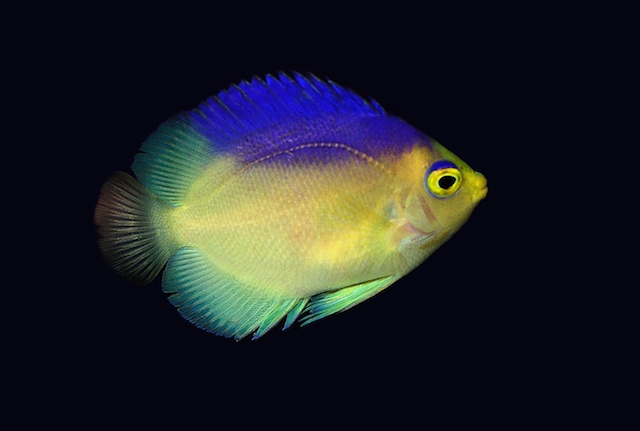 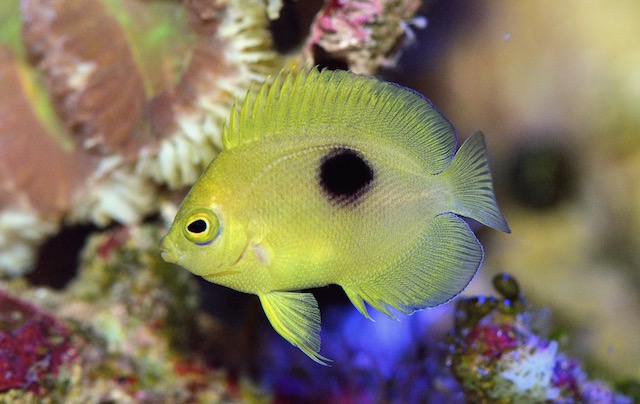 While Centropyge colini has always assumed its placement in Centropyge, its unusual body profile and tall dorsal fin spines have raised a couple of eyebrows now and then. The only other Centropyge that resembles C. colini is the very deepwater Centropyge narcosis, for which it was named after the condition associated with deep diving. Both share the characteristic morphology and unusual coloration of being chartreuse in their juvenile stage. C. narcosis intensifies to a rich yellow with age, while C. colini adopts a sickly absinthe green. Both are rather unmarked, sans a purple-blue back in C. colini, and a black ocellus in C. narcosis. It’s also interesting to note that these markings are all relatively similar in placement amongst the respective species, namely along the dorsum.

The similarities between both fishes are confirmed with genetic analysis, elucidating the sister relationship between C. colini and C. narcosis. In the aquarium context, all three species in this clade are generally difficult to maintain and feed. In decreasing order of difficulty, C. colini ranks first, followed by C. narcosis and A. arcuatus. 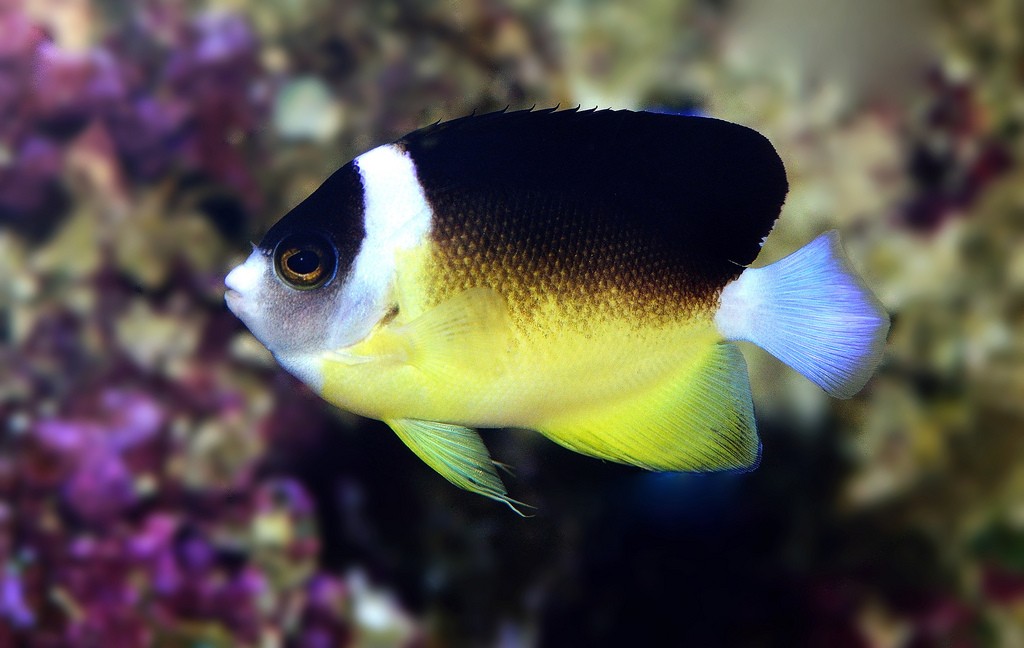 The mythos of Centropyge abei is stripped bare at the Waikiki Aquarium, Hawaii – the only place in the world to see the only living specimen of this fish. Photo credit: Lemon TYK.

In examination of the unique deepwater angelfish clade and the rest of the Centropyge phylogeny, one species is startlingly absent – the incomparable and mythical Centropye abei. Like the Bandit Angelfish, its placement in Centropyge is not without contention. During its description, it was noted to possess traits resembling those of Apolemichthys, Centropyge and even Chaetodontoplus. No tissue samples were obtained during the phylogenetic study, and so its cladistic placement is as of now, a mystery, and only placed provisionally in Centropyge.

However, it shares the same habits as C. narcosis, colini and A. arcuatus, in that it prefers very deep waters exceeding 300ft. Could C. abei form a distinct lineage from the other dwarf angelfishes? Could it perhaps form a relationship with the current trio? Its black back is pretty reminiscent of C. colini and A. arcuatus. Not to mention its concealed eye. It would not be too surprising if C. abei wound up being basal to the colini sisters, with A. arcuatus forming the basalmost branch. This, of course, is all speculation – at least until C. abei is genetically analyzed and compared against the other dwarf angelfishes. 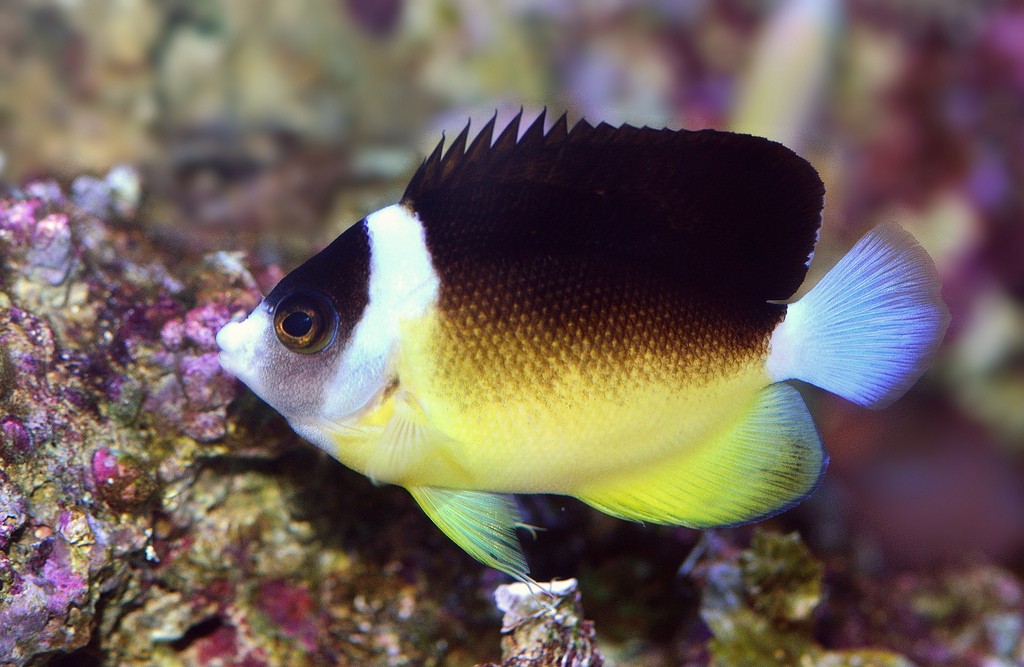 Because of its predilection for great depths, the complete distribution of C. abei is not known. Photo credit: Lemon TYK.

C. abei is best known from the almost viral deep dive video and photos that Brian Greene and Richard Pyle are known for. The species was first known in 2001 during a survey of Palau by a research submersible at a depth of 110-150m (260-490ft). It was, however, only four years later in 2005 where another specimen was seen and obtained by Forrest Young from Sulawesi at 120m (393ft). The Indonesian specimen eventually served to become the holotype when it was officially described in 2006, with Manado-Tua, Sulawesi serving as the type location.

The habitat of C. abei in Manado was reported to consist of steep inclined boulders with water temperatures at 21-22C (70F). On the other hand, temerpatures were a few degrees cooler in Palau at 17-22C (63-72F) where it was observed. In both locations, C. abei was never observed above 100m (330ft). 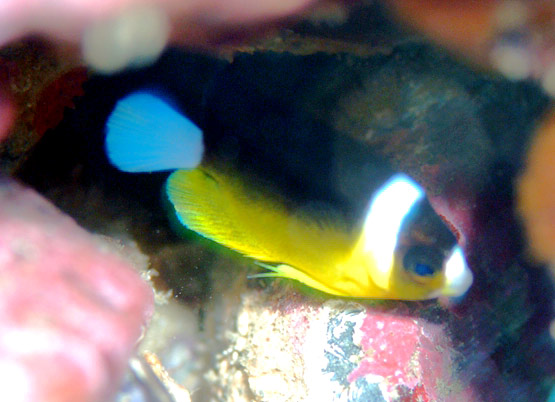 It came as huge surprise then, that a 3cm juvenile was documented in 2007 at 5m (16ft) of water in Miyazaki, Japan. How this specimen ended up here in such shallow waters will forever remain a mystery, but it was thought to be a waif from nearby Philippines. The juvenile was observed for two months before eventually disappearing. The species is not known from anywhere else, but due to its preference for very deepwater, and likewise difficulty in obtaining records, it probably attains a wider distribution east of Palau.

The mythos of Centropyge abei is dispelled at the Waikiki Aquarium, Hawaii – the only place in the world to see the this species alive, for which there is only one. It was obtained as a donation by Richard Pyle, who collected it in Palau in 2007. The mysteries of C. abei will remain locked within its DNA for now, but it is with hope that its secrets will be revealed in time to come. Systematically, much of Centropyge is in need of some reshuffling and house keeping. But that is the wonderful nature of science. There is always so much to learn, and even more to do.