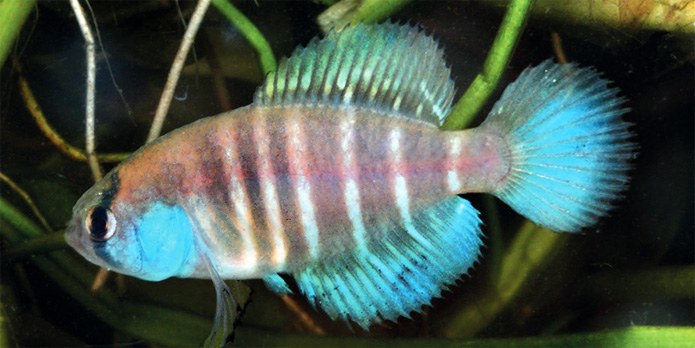 
Austrolebias pelotape is most closely related to Austrolebias adloffi and is categorized as part of the A. adloffi group. Like many species within this genus, A. pelotape has prominent vertical bars across the entirety of its body as well as a primary blue pigmentation for males.  Unlike most Austrolebrias (but like A. adloffi), the new species is totally absent of iridescent spots on either its fins or body.

According to the paper published in Vertebrate Zoology:

Distribution  and  habitat: Austrolebias pelotapes is known from temporary pools and swamps associated to small  streams  tributaries  to  the  northern  margin  of  the Canal de São Gonçalo, Patos-Mirim lagoon system, Rio Grande do Sul, Brazil (Fig. 3). In the type locality, water samples revealed the parameters: pH 6.4–6.8, dissolved oxygen 5.7–8.7 mg/l, and water temperature 16.7–25.9°C. Intensive field studies in the last 10 years have shown that all populations of this species are situated within or adjacent to urban areas of the town of Pelotas, in aquatic habitats being drastically reduced, making the species severely  threatened  with extinction.  Given  the  small  area of occurrence and the strong decline of habitats, A. pelotapes should  be  considered  as  a  critically  endangered species.

While captive breeding of Austrolebias sp. killifish has a successful track record, protection of its natural habitat is paramount to prevent them from going extinct in the wild.