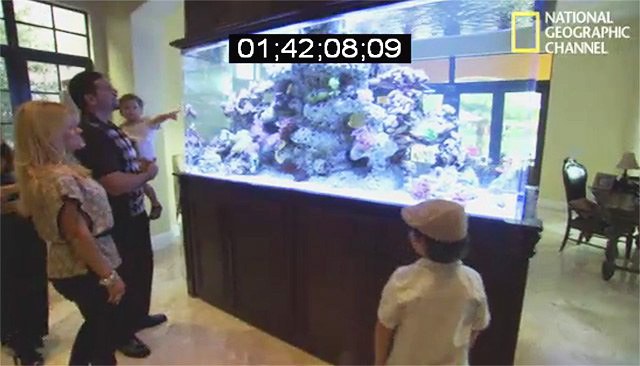 I’ll keep this review short and sweet so as not to ruin the episode for you.  In a nutshell, Fish Tank King Episode 5 is the most aquarist-centric episode to date.  Living Color Aquariums is tasked to build a massive 650 gallon living coral reef aquarium, then a freshwater aquarium for former NBA all-star Alonzo Mourning’s Overtown Youth Center. In order to stock the two aquarium builds, LCA takes us to not just one but two ornamental aquacultures.  Viewers first visit ORA Farms to gawk at their impressive array of propagated corals.  Next, we’re taken to a tropical freshwater fish farm to pick out colorful cichlids for the youth center aquarium.

Like other reality shows about specialized industries aiming to reach a broader audience, this episode has its fair share of (forced) drama, hyperbole, and scripted dialogue.  Boss Ben overpromises a client.  Right-Hand-Man Ben stresses and stresses some more.  Fish-Geek Francis annoys his coworkers … again.  I also found a few minor but notable factual errors throughout the episode (errors only aquarists may notice).

While the FTK Ep.5 is not perfect, fish and coral enthusiasts should find the show entertaining and a positive portrayal of our hobby.  Now if only we could get rid of the pesky “general audience” in order to focus on the aquariums and do away with the distracting drama …