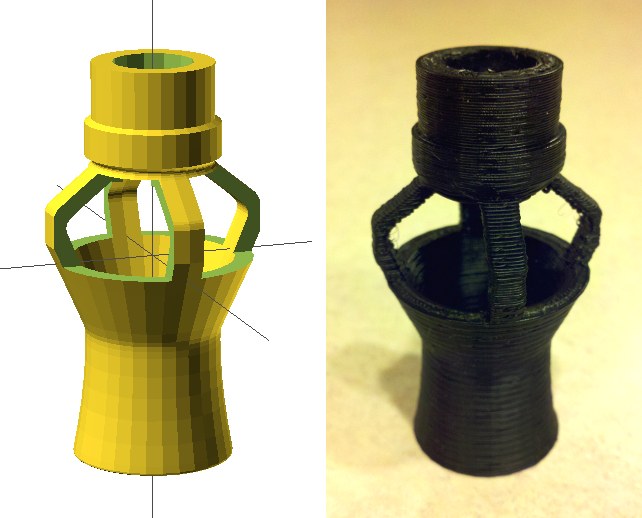 A model of the eductor (left) and the printed version (right).


When I first built my 3D printer (a Makerbot Cupcake), I queried a number of my reefkeeping friends about what I should attempt to print for my reef tank. I do not recall who made the suggestion, but someone suggested printing a mixing eductor. It’s an organic shape and has some interesting spars making it an attractive challenge.

Diagram of an eductor.

A cursory search through Thingiverse indicated that no one had yet released a model of an eductor that I could edit for my project so I designed one myself. I used different cross-sectional drawings from the internet to aid in the development of the 3D model and after a number of iterations I was successful. It now lives on Thingiverse for anyone to download and print. Scale the model up for larger diameter pipe or reduce it for a smaller diameter pipe.

For fun, I scaled it to fit my MaxiJet 1200. Yes, I know that eductors are recommended only for pressure-rated pumps (in order to obtain the maximum benefit from the mixing device), but hey, it’s cool, unique, and different so I went with it.    🙂

The main difference I note with this mixing eductor nozzle on my MaxiJet 1200 is it broadens the flow out considerably. Without the eductor nozzle, the flow was very jet-like and blew sand off of the bottom of the tank at the far side of my reef. With the eductor nozzle attached, the flow has broadened out and no longer disturbs the sand at all. While I have not measured the change in water flow, I like the result and will leave it on the pump for the foreseeable future.    🙂

Give me a challenge: what would you like to see me print?  I want your ideas!