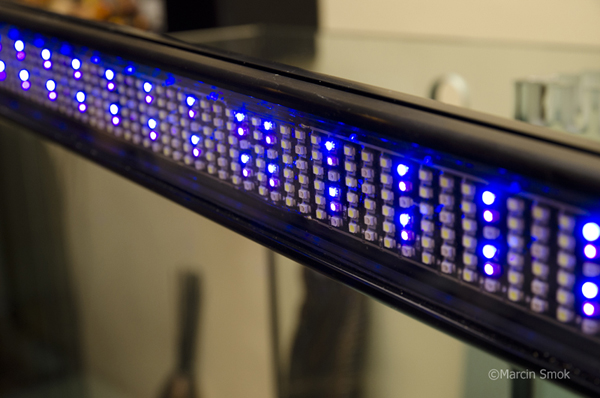 The aquarium LED market is getting saturated with new light fixtures coming out month after month. Featuring the latest diode chips, computer control ability and a broad spectrum of light they output, LED panels offer a temptation hard to resist. Unfortunately, it all comes at a price that is, for some reefers, still hard to swallow. The subject of today’s review, Hagen,s Fluval Sea LED fixture, offers a different approach,building their light for a budget-oriented aquarium enthusiast.

Hagen is a veteran in pet industry, their products being sold for over 57 years. Founded in Canada by a German immigrant Rolf C. Hagen, it quickly grew to be an international leader in pet products, especially aquarium equipment, additives and foods (just check their US website to see the amount of products they offer http://www.hagen.com/usa/). The new line of products called Fluval Sea is the company’s latest effort to venture in the more serious Reef Aquarium side of the hobby. From the great looking nano reef tanks, new line of salts, saltwater additives and finally a LED strip light, it looks like Hagen tries hard to secure it’s spot in Saltwater hobby.

I mentioned that Fluval new LED fixture stands out from other such products on the market. Instead of using high-power emitters well known in other lights, it features an array of SMD (surface mounted diodes) chips of various colors packed closely together. Hagen advertises this approach as the best solution for even light spread. How well does this statement work in a saltwater tank environment? Let’s find out…

Fluval LED light comes in three different color ratios: 5200K, 6700K intended to use in a planted tank and 25000K for the saltwater tanks. On top of that, you can choose from several lengths- 18,24,36 and 48″ will be available ( the actual length of each light might be little different as they are manufactured using the metric system. Hagen also displayed a small, square shaped fixture for cube nano tanks at this year’s Interzoo conference.. Big plus to Hagen for covering many different tank sizes. 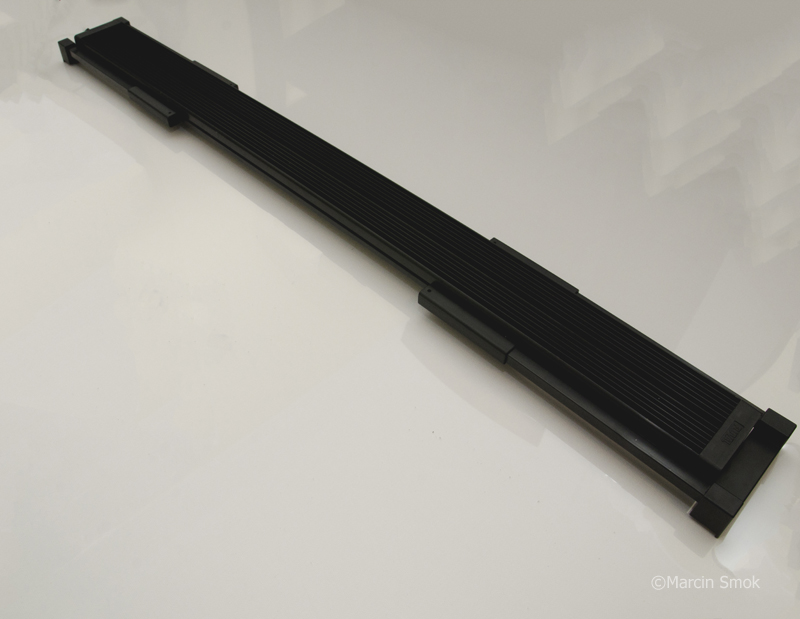 I received the 36″ Fluval Sea fixture with light output of 25000K for this review. It is a pre-release model, so I can’t comment on the quality of packaging nor the functionality of manual because I didn’t see the retail version yet. The light itself can be considered low-profile,with a thickness of only 1″ (25 mm)and width of 3 3/4″ (95mm). The 36″ model actual length is 33 1/2″ (850 mm) not counting the legs. Speaking of which, Fluval Sea LED light mounts directly on the aquarium glass edges by means of an adjustable legs. The overall fixture measures 35″ (890mm) with legs folded and 46 1/2″ (1175mm) when legs are fully extended. This design allows to use shorter striplights in a larger tanks, if needed. 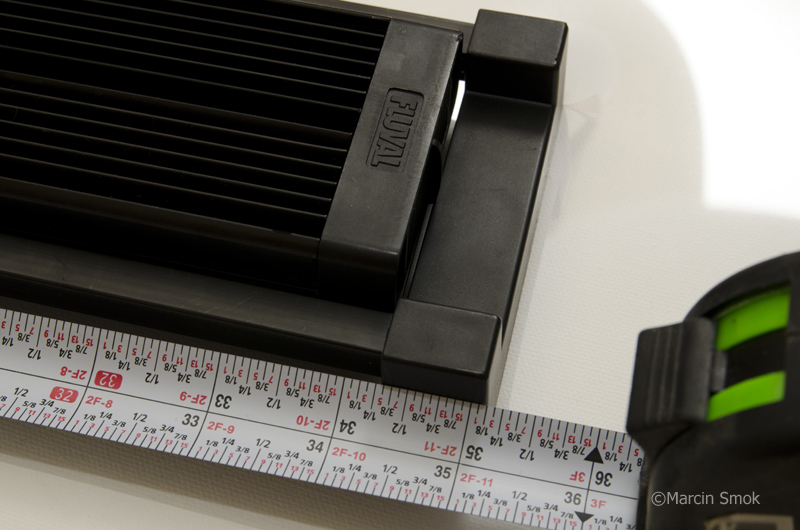 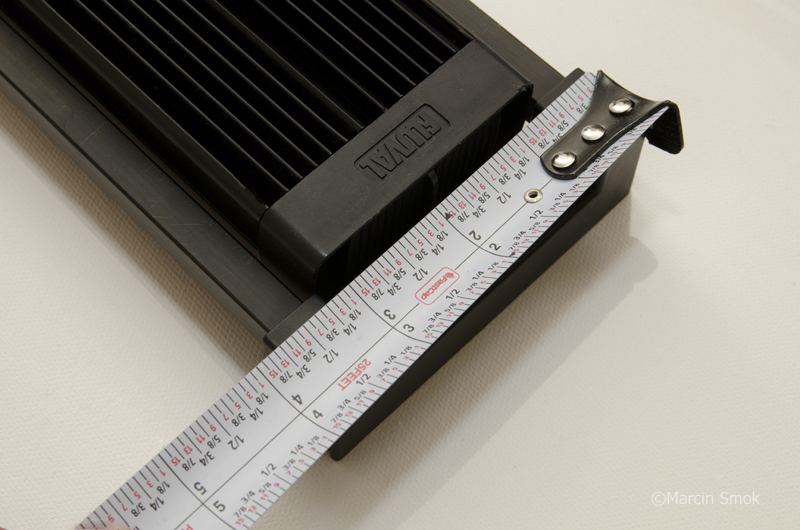 The built quality leaves little to complain about, the light case is made out of anodized black aluminum that seconds as a heatsink. There is a groove on top of the light, right in the middle of the heatsink’s fins, I suspect it could be used for a optional hanging kit by the time Fluval LED hits the market. On one side of the fixture there is a sliding switch to change between actinics and full spectrum light and on the other side we have a power cable.

Another nice touch is the length of the cable- over 13ft (a little under 4 meters). Somewhere in the middle of the cable length there is a power supply that converts 110V from the wall to 24V DC required to power the unit. This section has an in-line connector, which means you don’t have to unplug the whole light from the outlet to remove it.

The most interesting side of the fixture is the underside of course and here, behind the acrylic splashguard, we have the array of diodes, whole 504 of them. You read it right, Hagen’s 35″ light features 504 LEDs arranged in 84 rows, 6 diodes in each of them ( believe me, I counted twice and then went blind for a couple of minutes). 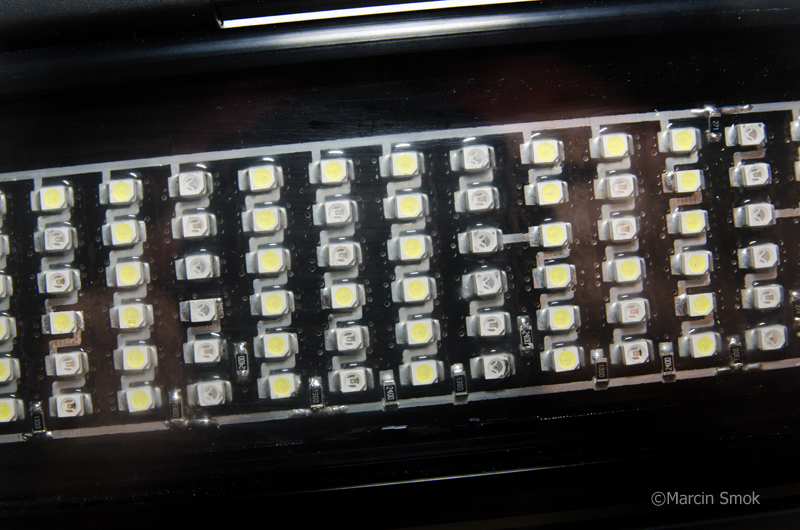 As I mentioned before, those are SMD LEDs, the same ones used as indicator lights and flash strobes in mobile phones. One flip of a switch and the actinics turn on, slide it to the other side and the whole array of LEDs lit up the tank. In actinics mode 88 leds stay on- 44 royal blue and 44 blue. 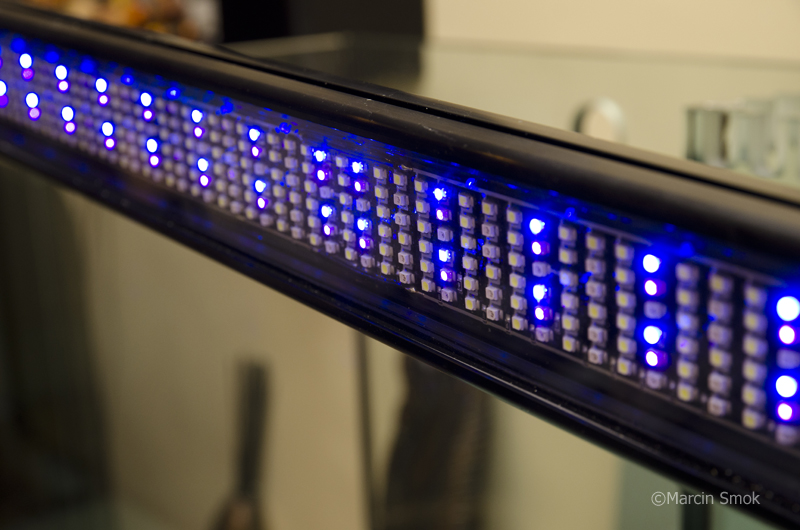 The whole 504 emitters are divided into several colors. We have 42 rows of cool white LEDs, 6 of them in each row, giving a total of 252. Then next to them are the actinics, 22 rows with 2 blue leds, 2 royal blue and two white that looks like 6500K variety. Every third row we have two red, two near UV and two yet another kind of white diodes. I must say, the variety of LED colors used in this light leaves nothing to desire. The only drawback is that there’s only one cable for both actinics and full spectrum, which means you can’t control them independently from each other. 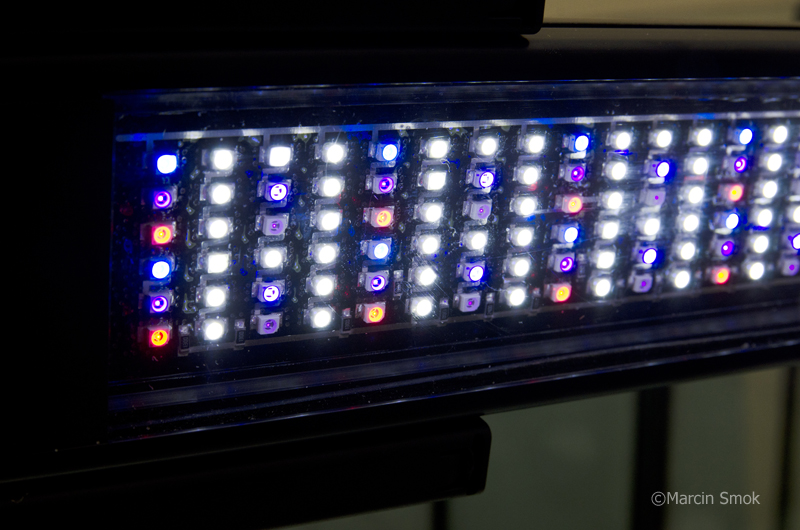 Upon turning on the whole 504 LEDs one thing stroke me right away- the brightness of the light they produce. Despite the use of low powered diodes, the vast amount of them combined with their close proximity to each other creates a strong uniform light capable of covering a rather large surface. A simple visual test proves that Hagen claims about even light spread seems true.

I left the light on for an hour and came back to check the heat dispersion. As I stated before, the fixture’s case works as a heatsink and there’s no fan of any kind. The heatsink gets quite warm, but not too hot to touch. What’s worth noticing is that almost no heat radiates down to the aquarium, a characteristic known to LED emitters (light emitting diode, despite creating a lot of heat, emits little to none infrared radiation responsible for raising overall temperature of fish tank’s water).

Let’s check the quality of light Hagen’s Fluval Sea LED light produces. To do that, I’ve used a Seneye PAR meter attached parallel to the light source on a miniature sized tripod. The measurements were taken in an empty glass tank at the length slightly longer than the fixture itself on depths varied from right below the light to the bottom of the tank at 20″. Here are the visual test results of the PAR test( in µmol photons/m2/second) 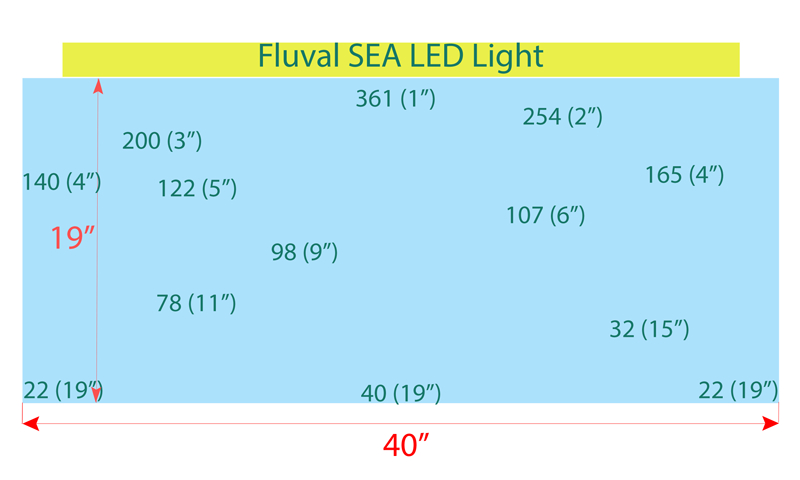 I have to admit PAR test results surprised me. In a good way that is. I didn’t expect much from a fixture built using SMD LEDs, but Fluval light produces some useful intensity capable of growing corals. It’s not the most powerful light on the market and can’t be compared to fixtures that use high power LEDs, but with those PAR numbers, soft and large polyped stony corals can be successfully kept and grown. Just to compare, in my display tank, some less demanding SPS flourish under PAR values of 200-300 The array of LEDs in Hagens striplight provides an even spread, just like advertised, with PAR values dropping on sides of the light only in depths above 15″. The only drawback is the light beam is a little narrow (again the light’s width is only 3 3/4), so for wider tanks you would need to use more than one of those fixtures. My suggestion would be one striplight for every 8-10 inches of aquarium width. I also measured the Kelvin output and it averaged 26000K which is only slightly off the advertised temperature.

I also checked how many Watts Hagen’s light uses, and the results are as follows- 42.5W when all diodes are on and 10.4 in actinics only mode. As you see, the light is very energy efficient, something worth looking for for those who watch their electricity bill. 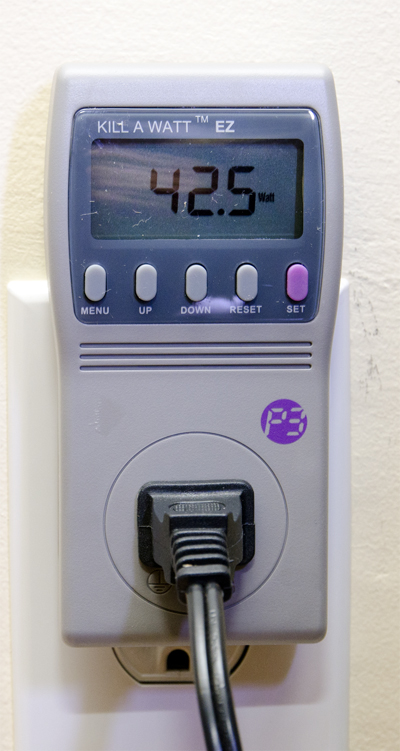 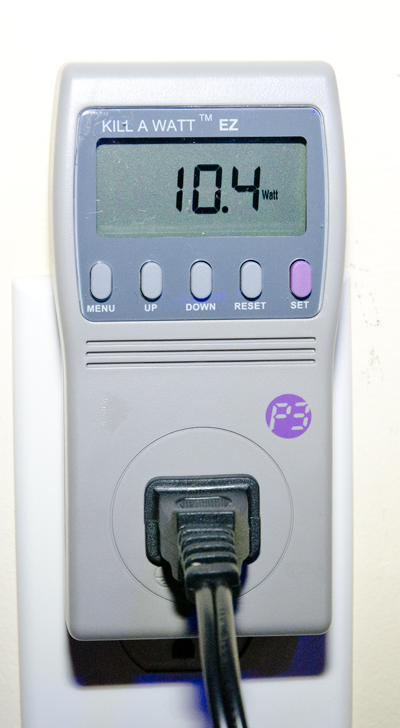 I still don’t have an information of Hagen’s Fluval Sea LED light retail pricing, but given Hagen’s previous records of producing affordable aquarium equipment, it could be quite affordable . Given so, it is going to be an attractive alternative for budget oriented hobbyist willing to swallow it’s shortcomes and enjoy what it delivers. Let’s make a quick summary of what I liked and disliked in Hagen’s LED light:

– even light spread and brightness

-only one cord for both white and blue channels

– no dimming capabilities ( although none cheaper lights offer this feature) 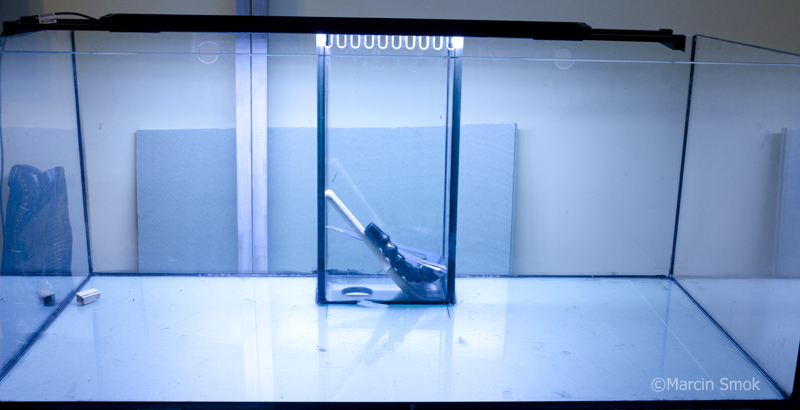 Summarizing, I find Hagen’s effort to enter the LED market a succesful one. I was skeptical when I started writing this review about SMD LEDs performance, but I changed my mind after running tests. If you understand this light’s limitations for growing corals, I think you’re gonna enjoy having it. The color temperature is well balanced and the light is very bright despite lower PAR values. Once I know the retail price of the light, and assuming that it’s gonna be low, I won’t hesitate to recommend this light for people looking to setup a fish only or mixed reef.

To check pricing and availability of the new LED light and other products in the Fluval Sea line, check Hagen’s official website at http://ca-en.hagen.com/ and their facebook profile: https://www.facebook.com/fluval (got to love that LEGO whale shark!)